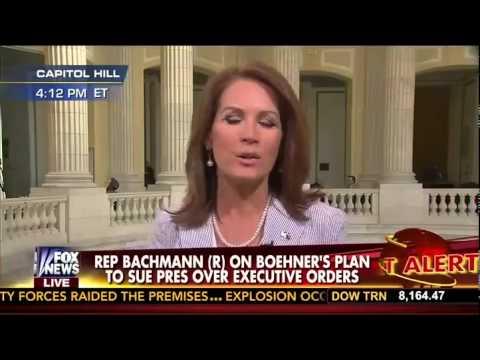 It’s not often that a FOXNews host takes a Tea Party “darling” like Michelle Bachmann to task for her Obama-Derangement-Syndrome, but that’s exactly what happened earlier today when Neil Cavuto got into a shouting match with Bachmann regarding her support for House Speaker John Boehner’s pathetic push to file suit against President Obama for having the audacity to behave as many presidents have before him.

Cavuto even called out Bachmann for her shameless hypocrisy, asking, “Where was your rage when Democrats were going after President Bush on the same use of executive orders, because I think you knew then that that was a waste of time then and I think you know in your heart of hearts this is a waste of time now?”

Cavuto then accused Bachmann of “conflating issues and being silly.”

He also ripped Bachmann for her hypocrisy a second time when she threatened to “defund the executive branch.”

“Think about what you’re saying,” Cavuto exclaimed. “Defund the executive branch? Congresswoman! If Democrats had said to you, ‘we’re going to defund President Bush,’ you would have laughed at them and so you should have …read more