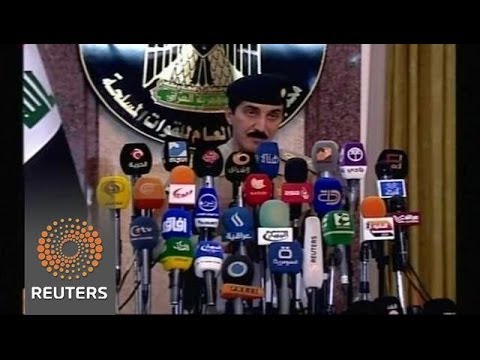 In a country currently full of sad tales, the tragic death of a Tikrit women’s affairs adviser has drawn particular attention. The Sunni Muslim woman was supporting her family as they stood against Sunni Muslim extremists when she was killed by a sniper.

For ten days, Tikrit woman Umiyia Jibara had been supporting her family and members of her tribe as they tried to stave off attacks by Sunni Muslim extremists in the Al Alam area, a northern suburb of Tikrit, which is mostly home to the Jibour tribe, who are also Sunnis. Forty-year-old Jibara, who was the Salahaddin governor’s adviser on women’s affairs was supporting the men by urging them on; she apparently refused to leave the soil barrier behind which they were all sheltering. And she had already managed to kill three members of the Sunni extremist group.

This most likely included fighters from the Islamic State of Iraq and Syria, known as ISIS, – and they wanted to take control of the area. They were also demanding that around 40 members of the local security forces be handed over to them. The extremists said they would guarantee the safety of the town if they did so. However the Jibour tribe refused this offer and the two groups began fighting.

On the eleventh day of this stand-off, an ISIS sniper managed to get Jibara in his sights and killed her. Her younger brother, Marwan, a director for a local satellite TV station, later posted the popular verses his sister was reciting just before she killed, on his Facebook page. She kept smiling even through this crisis, Marwan says sadly.

Umiyia Jibara was not the first in her family to be killed by Sunni Muslim extremists – the family had lost their father and an uncle to Al Qaeda previously. Hence their determination not to give in to ISIS.

Since her brother posted his memories of his sister, Umiyia has become a minor cause celebre with Iraqis on Facebook. Dozens of activists and journalists changed their profile pictures and put Umiyia’s picture there instead. Many others wrote messages of condolence and poems in her honour – this included those lauding the Tikrit woman for being braver than the Iraqi army, who had dropped their weapons and run when faced with ISIS.

Umiyia studied law at the University of Tikrit and is survived by her husband and four children, the youngest of whom is not yet two years old.

Iraq has lost a great defender of women’s rights, Marwan told NIQASH. “She had establshed organisations for Iraqi women and she travelled widely to represent the women of this province. She made a lot of progress here, including organising a monthly salary for 400 widowed women here.”