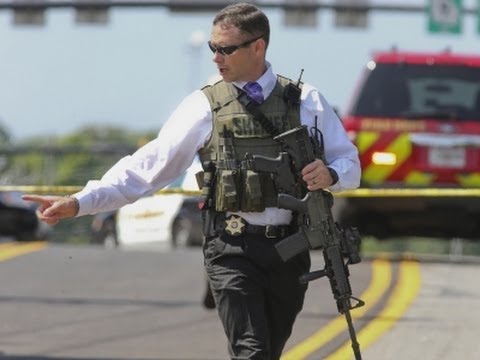 That didn’t take long. The Georgia GOP rushed into law an ‘open carry’ provision in April allowing people to tote around guns in bars and churches (apparently these are felt to be complementary institutions in Georgia) and schools (these are apparently felt to be full of expendable if short people in Georgia).

Then the national GOP and Fox Cable News (the “Josef Goebbels Commemorative Propaganda Division of the American Right Wing”) backed Cliven Bundy in his “sovereign citizen” claims that he doesn’t have to pay Federal grazing fees.

So on Saturday a sovereign citizen and former Transportation Department employee (who made his money from the Federal government he hates) showed up outside a Georgia courthouse armed to the teeth with automatic weapons and other munitions and with the clear intent of taking hostages inside the courthouse. He was open carrying, you see, and standing up against big government. Or rather standing overtop it with a gun to its head.

This was a clear act of terrorism, but since it was committed by a white person, no one brought the word up.

A brave policeman confronted the sovereign shooter, trading volleys of gunfire with him. The brave deputy was shot twice in the leg but will survive. He slowed down the shooter long enough to allow SWAT to get to the scene. Dennis Marx, the shooter, was killed in the exchange of gunfire that ensued.

It is tragic that a law enforcement officer was wounded, and that others had their lives put in danger, all because the NRA insists that all Americans, including the unstable ones, have semi-automatic weapons and all because the Republican Party now supports racist criminal tax deadbeats as a knee-jerk reaction.

But, if you encourage crazy people and hand out guns like candy, the courthouse incident is what you get back.

Another lesson about the NRA hatred for gun regulation (a hatred stoked by contributions from the gun manufacturers) and GOP attempts to recruit white racists of a terrorist bent can be learned from Seattle last week. There, a crazed person with an obsession with Columbine and school shootings killed one student and wounded others.

The shooter at a Seattle Christian college was using a shotgun. They need to be broken and reloaded, unlike semi-automatic weapons. While he was reloading a brave student tackled him and others piled on. If Aaron Ybarra, the shooter, had been using a semi-automatic, the student who tackled him would be dead, along with likely large numbers of others slated to be killed.’

You get what you lobby for, GOP.