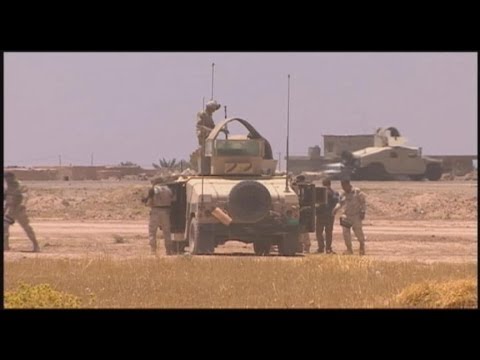 As Sunni insurgents have swept across northern Iraq, they have sought to win support by portraying themselves as the liberators of the country’s Sunni population.

One of their first acts after routing the Iraqi Army from Mosul on June 6-9 was to open up the gates of the city’s prison.

The symbolism was powerful: those freed, the insurgents claimed, were all victims of a repressive Shi’ite-led government that was persecuting the city’s majority Sunni population.

With such gestures, the insurgents — a mix of jihadists, Islamic groups, reinvigorated Baathists, and some tribal groups — hope to win support by capitalizing on deeply felt grievances within the Sunni community.

Here some of the key grievances and how they helped fuel today’s crisis:

The power of the insurgents’ Mosul prison gesture lay in Sunnis’ widespread belief that their community has unfairly borne the brunt of periodic security sweeps under a controversial counterterrorism law.

The Counterterrorism Law was passed in 2005 by an unelected parliament in the early years of the U.S. occupation, when Iraq faced a growing Sunni-based insurgency by loyalists of deposed President Saddam Hussein and Islamist groups. The law was never repealed and Sunnis say it is used today to keep their community under surveillance.

In January 2013, thousands of Sunnis took to the streets of Baghdad and elsewhere to protest what they said was the annual jailing of hundreds of innocent people under the law and their subsequent detention for years without trial.

De-Baathification is the informal name for another law Sunnis say unfairly targets them: the Justice and Accountability Law.

The concept of barring higher members of the deposed Baath Party from prominent government posts dates back to the U.S. occupation of Iraq in 2003 and is included in the Iraqi Constitution. The current form of the law, most recently amended in 2008, provides for an independent Higher National Commission to continue de-Baathification indefinitely but also gives those expelled from their jobs the right to appeal.

Sunnis say the law has been broadly applied to exclude Sunnis in general from government employment. The Iraqi government disputes the claim.

The de-Baathification process was another rallying point for Sunni protesters in 2013, along with claims the government stacks public institutions with loyalists of Shi’ite religious parties as part of an extensive patronage system.

Sunnis feel their community has been politically marginalized by the Shi’ite-dominated government of Prime Minister Nuri al-Maliki.

They were outraged when, the day after the last U.S. troops exited Iraq in December 2011, Maliki sought to arrest Sunni Vice President Tariq al-Hashimi under the Counterterrorism Law

The Interior Ministry ordered Hashimi’s arrest after some of his bodyguards reportedly accused him of running death squads during the height of sectarian violence in 2006 and 2007. The office of Iraqi President Jalal Talabani, a Kurd, issued a statement saying he was “surprised” by the arrest warrant and Hashimi fled to the Kurdish self-rule region for safety. Hashimi later left Iraq and was convicted and sentenced to death in absentia.

A year later, Sunni anger deepened as 10 bodyguards of another top Sunni politician, then-Finance Minister Rafia al-Issawi, were arrested on terrorism charges. The arrests in December 2012 triggered 70 days of Sunni protest rallies, culminating in an enraged Issawi announcing his resignation from the government at a mass gathering outside Ramadi.

Sunni anger with the Maliki government transformed into sustained protests in 2013 with the construction of protest camps in many cities in the Sunni heartland. The protests, which at first focused on accusations of government corruption and inadequate services, received initial echoes of support in some Shi’ite areas.

But a government raid on a protest camp in Al-Hawijah in northern Kirkuk Province in April 2013 turned the protest movement increasingly into a showdown between militant Sunnis and security forces. Thirty-eight people died in the raid, which came after protesters refused to hand over militants suspected of the killing of an Iraqi soldier.

There were further deadly clashes in December 2013, when security forces raided a protest camp near the city of Ramadi in western Anbar Province. The fighting left at least 14 dead and Sunni insurgents subsequently seized parts of Ramadi and all of Fallujah.

By successfully holding onto Fallujah and parts of Ramadi against a government counteroffensive for almost six months, the insurgents gained momentum for their June 2013 military sweep through northern Iraq to capture Mosul and then drive south to the outskirts of Baghdad.

End Of The Awakening

Now that an Al-Qaeda offshoot, the Islamic State in Iraq and the Levant (ISIL, aka ISIS), is in the vanguard of the insurgency, those who want to roll it back may hope for a new Sunni Awakening movement. That was the U.S.-sponsored effort to arm Sunni tribes to defeat Al-Qaeda during the earlier Sunni insurgency of 2006-07.

However, after the U.S. departure, the Maliki government ceased funding the Sunni Awakening in another move seen by Sunnis as intended to strip their community of power. The end to funding also resulted in a loss of salaries for thousands of young men, embittering them, and adding yet another grievance to the long list of complaints heard during the protest movement of 2013.

Now members of the Awakening movement, also known as the Sahwa, or Sons of Iraq, have to weigh their enmity for jihadists against their anger with Maliki.

In a first sign that some Awakening groups will support Baghdad, the head of the Awakening Council in Anbar Province, Abu Risha, said on June 14 that his men “have been fighting Al-Qaeda in Anbar for the past six months and we’re ready to fight for another six months, but we need American support.”

How many other Awakening groups will feel the same way remains to be seen.

Many Sunnis have an additional grievance with Maliki, and that is over what they say is his role in encouraging, or at least acquiescing to, the participation of Shi’ite militias in some state security operations.

The worst of recent examples was in late March, when security forces and militia members from Asaib Ahl al-Haq, a splinter group of radical Shi’ite cleric Muqtada al-Sadr’s movement, entered the town of Bohruz in April and killed at least 23 people following a takeover of the town by Sunni militants.

The Sunnis’ hatred for Shi’ite militias was stoked by the sectarian violence of 2006-07, which brought the country to the brink of civil war in tit-for-tat bombings and shootings carried out by extremist groups on both sides. The intercommunal violence subsided but never disappeared, growing over recent months to levels not seen since 2008.

Finally, many Sunnis simply resent their loss of status following the change of the power balance in Iraq following the overthrow of Saddam Hussein. Under Saddam’s regime, the Sunni minority dominated positions of power but in today’s Iraq, power is held by the Shi’ite majority.

The nostalgia was visible in the protest camps of 2013, where Iraqi flags from the Saddam era were prominently displayed. It also has helped the banned Baath Party to reconstitute in the form of neo-Baathist groups, the best-known of which is the Jaych Rijal al-Tariqa al-Naqshbandia (JRTN). The JRTN is led by Izzat Ibrahim al-Duri, who was the deputy of Saddam Hussein.

For now, the neo-Baathists are maintaining a battlefield alliance with the ISIL and other armed Islamist groups in a drive to make the Sunnis ascendant again.

For the Baathists, the goal is a secular, Sunni-dominated Iraq. For the ISIL, the goal is to establish an Islamist caliphate in Iraq and the Levant based on its own extreme interpretation of Shari’a, or Islamic religious law.

ABC News: “Inside The Battle for Iraq”