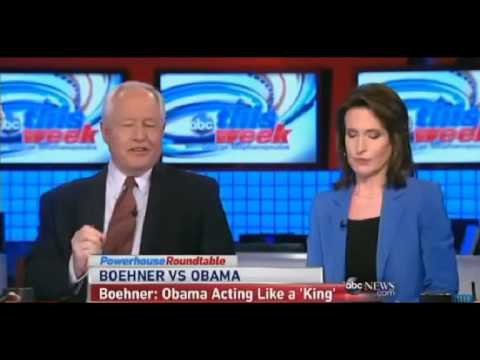 “Katrina vanden Heuvel [editor of The Nation] and Bill Kristol tussled over Iraq on ABC’s This Week today when vanden Heuvel lumped in Kristol with the Iraq “architects of catastrophe” and suggested he enlist in the Iraqi army if he’s so serious about fixing the region.

Vanden Heuvel said there should be some accountability for the people who got Iraq so wrong. She called Kristol and other neocons “armchair warriors” and told Kristol, “If you feel so strongly, you should, with all due respect, enlist in the Iraqi army.” Kristol shot back, “That’s a very cute line, Katrina.”

He blamed President Obama for saying in 2011 that the region was peaceful and stable, and argued the Bush administration “left things peaceful” when they left. Vanden Heuvel said Obama couldn’t get a status of forces agreement, but the answer isn’t to “pour more men, women, money” into the region.”