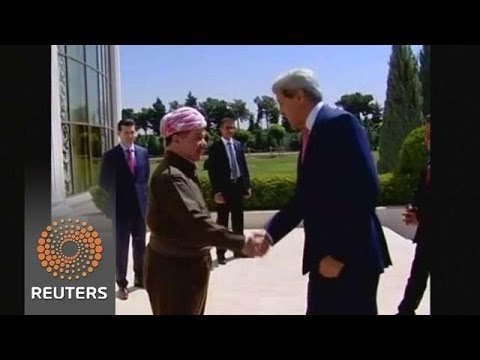 Former Vice President and unindicted felon Richard Bruce Cheney (they always give the criminals’ names that way, in full) once said that he was sure that the Sunni Arab resistance to the US in Iraq was in its last throes. Nobody in his own administration agreed with him then, and this allegation is one I think we can safely add to the extensive lists of things he has been dead wrong about. ( At the time, I explained what ‘last throes” are, here.

Now, precisely because Iraq’s Sunni Arabs won’t put up with the new order Cheney tried to impose on the, it is the whole country of Iraq that is in its last throes.

Secretary of State John Kerry’s mission to Baghdad and Irbil appears to be a bust. He is alleged to have told the political class in Baghdad that they’d have to dump Prime Minister Nouri al-Maliki if they want American aid, and that they’d have to form a government of national unity and make a place at the table for the Sunni Arabs. There is no sign that his jeremiads were taken seriously.

It is even reported that Nouri al-Maliki assured Kerry that he could form a government by the beginning of July.

Then Kerry flew up to Irbil, the capital of the Kurdistan superprovince of Iraq. It had consisted of three former provinces of Iraq. But the Kurds have added a fourth, Kirkuk Province, and part of a fifth (northeast Diyala Province) to their semi-autonomous region (think Quebec on steroids).

Barzani blew him off big time!

““it is time now for the Kurdistan people to determine their future . . . Iraq is obviously falling apart anyway, and it’s obvious that a federal or central government has lost control over everything,”

The London Pan-Arab daily al-Hayat says that its sources in Erbil are saying that Barzani told Kerry that he planned to secede from Iraq and that the US would have to accept it.

Experienced Iraq journalists are speculating that Kurdistan could declare complete independence within days.

While once upon a time that step would have been completely unacceptable to Turkey, by now Ankara appears to have made its peace with the notion. Turkey is responsible for 70% of investment in Kurdistan, and the Kurds are willing to supply Turkey with their oil on favorable terms. In the way of the ruling Justice and Development Party (AKP), its leaders may be confident that their economic colonization of Iraqi Kurdistan will be enough to keep it from spinning out of control.

Kurdistan seems to be putting into play possible Kurdish steps toward independence. But the detachment of large swathes of Iraq from the Baghdad government by Kurdish paramilitary forces or Peshmerga (he who stands before death) is meeting opposition not only from Sunni Arab militias but also from extremist Shiite ones, who mind this detachment of Arab territory from the fatherland.

Meanwhile, Syrian and Iraqi fighter jets hit positions at Syria border crossings in Rutbah and Qa’im Wednesday morning, which ISIS has taken over. The Arabic presss says that over 70 persons are dead.

Al-Arabiya is reporting that Iran is threatening to intervene to protect Shiite shrines in Iraq.

As for the Iraqi Army, its officer corps seems unwilling or unable to mount a counter-offensive agains the ISIS fightes across. They are drawing up for a defensive action in hopes they can keep Bagdad.

Reuters: “Kerry urges Kurds to save Iraq from collapse”