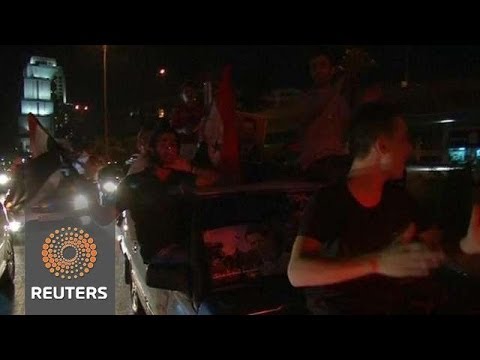 The world has been treated to a whole series of “elections” in the Middle East recently. Iraq had parliamentary elections, Libya’s parliament voted for a new prime minister, and Egypt and Syria had presidential elections. This summer, Turkey will have elections.

It would be nice if all these elections signaled a turn in the region to democracy. They don’t. Libya’s supreme constitutional court declared that the parliament did not have the required quorum of 120 members to elect Maitig. His predecessor, Abdullah al-Thinni, has declined to hand power over to him. Maitig’s election was an attempt by Muslim fundamentalists, a plurality in parliament if we count independents, to take over the government so as to enjoy the advantages of incumbency during the parliamentary elections this summer. That they had failed was fairly obvious from the proceedings, and their attempt to soldier on and claim their victory anyway was distasteful to the judges, who are flexing their muscles for the first time on a major case in modern Libyan history. The Muslim fundamentalists clearly thought there was some legitimacy among the public to be had by pretending to have gained the prime ministership by a fair vote instead of admitting that they made a parliamentary coup. Ironically, it is the preliminary court ruling that is the most democratic thing going on in Libya right now. Out on the streets, parliament and prime minister mean little, as elements of the military have rallied to use their munitions to make war on radical militias of the religious Right.

Then we have Syria, where President for Life Bashar al-Assad held jokey elections. His rival was forced to praise him unreservedly. He got 88% of the vote according to his press release. He doesn’t control half the country, which is in fierce rebellion against him. But he seems to have needed the fig leaf of a popular electoral victory to hide his brutal and nasty dictatorship and one-party state. It isn’t that he doesn’t have supporters. The 10% who are Alawi Shiites, the 5% who are Christians, the Druze, 12er Shiites, and secular-minded urban Sunni Muslims, the businessmen in Damascus tied to the state– many groups support the Baath government that al-Assad heads, which is why he is still in power (that and his retention of enough of the army to maintain air and artillery superiority). Regional Shiite support from Lebanon’s Hizbullah and Iran have also helped save his kebab (you can’t say bacon in the Middle East). In the midst of a grinding civil war that has left over 150,000 dead and millions displaced, people actually eagerly went to the polls in Lebanon and in regime-controlled areas of Syria. Some support the regime and want to buck it up. Others have lost faith in the revolution and just want the fighting to stop.

In Egypt, Field Marshall Abdel Fattah al-Sisi nastily suppressed the Muslim Brotherhood, killing hundreds and jailing tens of thousands. Since that party had gotten 53% of the vote for the presidency in 2012, that was an extreme reversal of fortunes, and provoked enormous resentment that in some cases became violent. Al-Sisi made a lot of bright promises to Egyptians about security, bread and renewed prosperity, which he would provide by attracting aid and investments from the Gulf oil monarchies (who were very happy to see the populist, revolutionary Muslim Brotherhood crushed). The official Egyptian television stations and newspapers (there are only a couple of independent newspapers left) engaged in an orgy of Sisi-love. He won by an embarrassing 96% against a leftist candidate who had garnered about a fifth of the voters in a 14-man race for the presidency the year before. Sisi’s quest for legitimation at the ballot box had a set back when turnout was unexpectedly low; adding a third day of voting, probably an illegal step, only slightly ameliorated the shortfall. Sisi does not have a mandate from the majority of registered Egyptian voters, having roughly 40% of their vote (as opposed to 96% of the ones who actually cast a ballot). Today Sisi will trumpet his popular mandate, but in fact it is rather anemic.

In Iraq, the Bush administration’s parliamentary system has produced perpetual gridlock. There is only one plausible prime minister, Nouri al-Maliki, whose Da`wa (Islamic Mission Party or Islamic Call Party) got the largest number of seats (but still only a little more than a fourth of them). But the other parties hate al-Maliki and won’t go into coalition with him. In parliamentary systems it is desirable to have a coalition with 51% of the seats, since otherwise you are constantly open to being unseated by a vote of no confidence. Sometimes minority governments are appointed and they can survive for a while, but it isn’t a recipe for stability. Al-Maliki in any case hasn’t been good with building reconciliation with the Sunni Muslims, and in recent months he is losing bits of Iraq to al-Qaeda, a very bad sign. It may be months before a majority coalition is announced. In the meantime the country is in gridlock. Yesterday students at a university were taken hostage and the regime lost parts of major Sunni cities like Ramadi and Samarra; residents in Mosul to the north began fleeing the fighting. Many bombs were detonated in Baghdad.

So elections in the Middle East are a dead end in and of themselves. They function as authoritarian plebiscites, adding to the power of the president and fobbing off the public with promises that gradually there will be a turn to real democracy. In 2011 the public got tired of waiting for the real thing. Elites have responded with counter-revolutions. Those may not succeed, either.

I think the young people all see the phoney elections for what they are. Some are relatively upright, as with Iraq or Turkey, but are still skewed. In Turkey, the formula used for parliamentary victory is detached from reality and does not resemble the popular vote. In Iraq, the ballots probably weren’t tampered with, but the system produces a perpetual hung parliament. In Syria and Egypt elections were about a rhetoric of popularity for dictators. The Millennial youth tried to tell their elders in 2011 that they no longer accepted the phoney elections, and did not see them as producing legitimate governments. You could say that the governments don’t care. But then why this elaborate sham? It is because the governments do care, and want to be perceived as legitimately elected. Their problem is that is is fairly obvious that mostly they are not; or if they are, as in Baghdad, there was still substantial shenanigans.