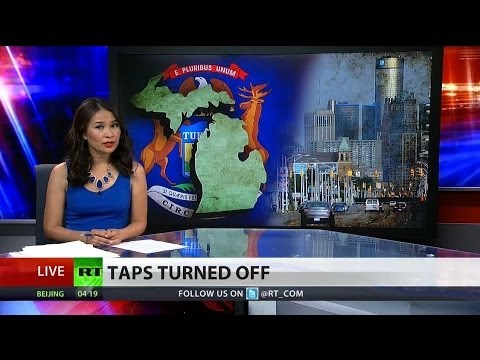 'By denying water service to thousands, Detroit is violating the human right to water.'

As thousands of people in Detroit go without water, and the city moves to cut off services to tens of thousands more, concerned organizations have taken the unusual step of appealing to the United Nations to intervene and protect the "human right to water."

“After decades of policies that put businesses and profits ahead of the public good, the city now has a major crisis on its hands," said Maude Barlow, founder of Blue Planet Project and board chair of Food & Water Watch, in a statement. “By denying water service to thousands, Detroit is violating the human right to water."

The Submission to the Special Rapporteur was released Wednesday by the Detroit People’s Water Board, the Blue Planet Project, the Michigan Welfare Rights Organization and Food & Water Watch.

It calls for the "state of Michigan and U.S. government to respect the human right to water and sanitation" and for shut-offs to be halted, services restored, and water to be made accessible and affordable.

The report comes on the heels of the Detroit's city council's Tuesday approval of an 8.7 percent increase in water rates, part of a long-standing trend that, according to Food & Water Watch, has seen prices increase 119 percent over the past decade.

This rate hike follows an announcement in March by the Detroit Water and Sewerage Department that it would start turning off water for accounts that are past due.  According to a late May Director's Report from the DWSD, there were "44,273 shut-off notices sent to customers in April 2014" alone, resulting in "3,025 shut-offs for nonpayment, and additional collections of $400,000."

Emergency Manager Kevyn Orr, who was appointed to power by Michigan Governor Rick Snyder in March 2013, has aggressively pursued privatization and austerity measures across the city. "Nothing is off the chopping block, including water utilities, which are being considered for regionalization, sale, lease, and/or public private partnership and are currently subject to mediation by a federal district judge," reads the report.

"The Detroit People’s Water Board fears that authorities see people’s unpaid water bills as a 'bad debt' and want to sweeten the pot for a private investor by imposing even more of the costs of the system on those least able to bear them," the report continues.

Residents say the mass cut-off of this vital service is especially unjust in a city already struggling with high unemployment, a poverty rate near 40 percent, and a foreclosure crisis that has devastated and displaced people across the city, hitting Detroit's African American community especially hard.

"When delinquent corporate water lines are still running without collection of funds, it demonstrates a level of intentional disparity that devalues the lives of the people struggling financially," said Lila Cabbil, President Emeritus of the Rosa Parks Institute, which is part of the People’s Water Board. "Where is our compassion? Where is our humanity?"

Mirrored from Commondreams.org
This work is licensed under a Creative Commons Attribution-Share Alike 3.0 License.