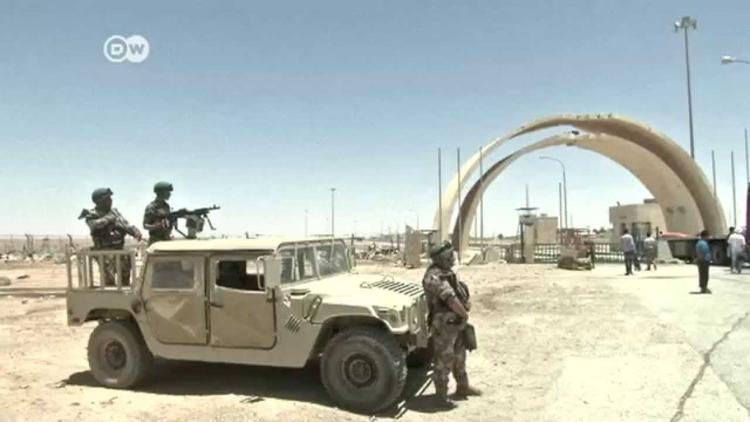 Secretary of State John Kerry is an experienced and knowledgeable diplomat, but the difficulty of the situation in the Middle East right now is demonstrated by the repeated reversals he suffered during his trip to the Middle East. He asked Egypt to honor freedom of speech even as he brought news of over $500 mn in aid. The next day Egyptian courts jailed journalists for 7-10 years for practicing journalism. He visited Kurdistan president Mahmoud Barzani in Erbil, asking him to help form a united government in Baghdad to stand against the Islamic State of Iraq and Syria (ISIS or ISIL). Instead, Barzani all but said he was on the verge of seceding from Iraq. In Baghdad, some sources say Kerry pushed the political elite to form a government of national unity and hinted around heavily that Prime Minister Nouri al-Maliki would have to go (the State Department denies this).

Yesterday in his weekly address to the nation, al-Maliki defiantly refused to go quietly. He denounced the “formation of a government of national salvation, as they call it” as merely “a targeting by rebels of the constitution in order to finish off the nascent democratic experiment and to confiscate the votes of the voters.”

Al-Maliki emphasized that he will convene parliament within a week to begin the process of forming a new government, in accordance with the constitution and with the call of Grand Ayatollah Ali Sistani. (The constitution requires that parliament begin deliberations on forming a government 15 days after the elections are certified. It was rumored that parliament would not in fact meet until the power brokers had made a deal about who the new prime minister would be. Sistani complained about this sidelining of the people’s representatives and insisted that the constitutional provision be honored.) Al-Maliki, weakened by the failure of his army (which has collapsed in the face of the ISIS-backed Sunni uprising), has been constrained to be seen as acting constitutionally if he has any hope of quieting his critics.

In parliamentary systems like Iraq, it is desirable that the prime minister have 51% of seats on his side, so as to be able to pass laws and survive challenges (votes of ‘no confidence’, for which the constitution provides). Putting together that coalition, where one’s party doesn’t win a majority of seats, happens after the election (in the US in essence the coalitions under the umbrellas of the two major parties are formed before the election). If al-Maliki can persuade another 73 parliamentarians from among Shiites and (likely) Kurds to support him, he can form a government. At the moment, reaching the magic number of 165 seems difficult, since the other Shiite parties now oppose al-Maliki, and the Kurds are also unhappy with him. That the small Sunni Arab parties would support him seems unlikely.

It is also possible in parliamentary systems for there to be a minority government, wherein the prime minister does not have a majority but where it is hoped that none of the other parties is motivated to bring him or her down with a vote of no-confidence. It is unclear if Jalal Talabani, a Kurdish leader, will continue as president; he had a stroke 18 months ago and seems to be absent from the political scene. Much therefore depends on who the president will be, whether al-Maliki can put together 165 votes (thus making other candidates implausible), and what the president thinks of al-Maliki. This process can be interminable and take 7 or 8 months, which Iraq probably doesn’t have, which is why al-Maliki’s insistence on putting the country through it is so discouraging.

Al-Maliki rather outrageously accused those who called for him to step down in favor of a government of national unity of de facto allying with ISIS, a would-be al-Qaeda affiliate, and the remnants of the Baath Party that used to rule Iraq in former dictator Saddam Hussein’s day.

Shiite leader Muqtada al-Sadr put forward a 6-point plan for ending the crisis. He urges that the ‘moderate Sunnis’ be separated from ISIS terrorists and called for a government of national unity (exactly what al-Maliki just rejected). He also called on Iraqis to act against any foreign incursions into Iraq.

At the same time, Ali al-Hatim, leader of the Council of Sunni Tribes, rejected the notion of al-Maliki gaining a third term: “He has to go, like it or not.” He characterized al-Maliki’s rule as “rule by Iran.” He also denounced the present constitution as an “occupation constitution.” If Baghdad has any hope of recovering Iraq’s Sunnis, it would be by allying with the rural tribes and nationalist urban dwellers against ISIS. (There have already been clashes between ISIS fundamentalists and Iraqi tribal forces). Clearly, al-Hatim is not willing to make that bargain with al-Maliki.

Meanwhile, the UN Food and Agriculture Agency (FAO), is warning of the possibility that the current events will be a disaster for the country’s ability to feed itself. About a third of Iraq’s wheat crop and 38% of its barley is grown in Ninevah and Salahuddin Provinces, both of them caught up in the Sunni uprising led by ISIS. With so many Iraqis being displaced, farmers may find it impossible to harvest these grain crops, an activity that ordinarily would just be beginning.

There were no big military movements on Wednesday. The Iraqi army still claims to have Samarra and the road that leads to it, including the (Shiite) shrine with the golden dome. ISIS has threatened to raze Shiite and Sufi shrines.