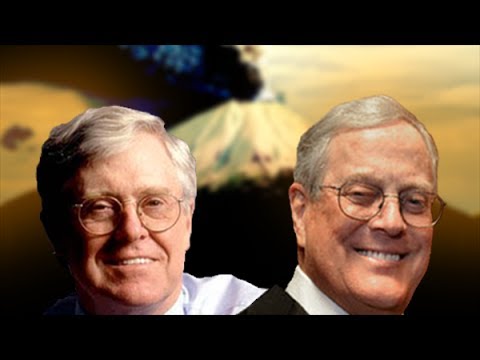 Via Sourcewatch and The Young Turks:

At a secretive summit held in June 2014 at a resort in Laguna Beach, California, the Koch Brothers discussed their plan to launch a new energy initiative that will be spearheaded by the Freedom Partners. The Daily Beast obtained an April 2014 email sent by Kevin Gentry, Vice President of the Charles G. Koch Charitable Foundation to members of Freedom Partners that:

Invited Freedom Partners members to join an upcoming conference call about a “significant new Freedom Partners initiative” which he touted as one that would “drive the national narrative around energy and the tremendous benefits of reliable affordable energy for all Americans, especially for the less fortunate.” The email indicated that discussions about the energy project began last summer at another Koch donor event in New Mexico, which drew outgoing House Majority Leader Eric Cantor and Rep. Paul Ryan among others.

On its website, Freedom Partners describes the mission of its energy policy as, “Increasing access to the affordable energy that helps societies – businesses, families, and especially the poor – prosper and thrive,” and states that,

“America’s abundant and affordable supply of energy – and the economic impact it brings – faces many threats. Environmental regulations, an unaccountable federal bureaucracy, activist judges, and the fringe environmental groups are working together to stall the production and use of these vital resources.”

Kevin Gentry’s email discussed how the energy initiative was launched in response to a plan by liberal donors to spend as much as $100 million to make climate change a top-tier issue in the 2014 election cycle.

The Daily Beast article is here