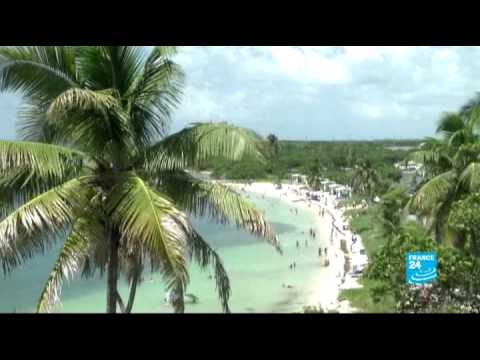 It is amazing for me to see the very aggressive building boom underway in south Florida; on the beaches and barrier islands, throughout downtown and in the low western areas bordering the Everglades. They are building like there is no tomorrow. Unfortunately, they are right.

The US National Oceanic and Atmospheric Administration (NOAA) published its assessment of sea level rise in 2012 as part of the National Climate Assessment. Including estimates based on limited and maximum melt of the Greenland and Antarctic ice sheets, it anticipated a raise of 4.1 to 6.6ft (1.25 to 2m) by 2100, reaching 2ft (0.6m) by around 2050 and 3ft (0.9m) by around 2075.

This degree of sea level rise would make nearly all the barrier islands of the world uninhabitable, inundate a major portion of the world’s deltas, upon which hundreds of millions of people live, and leave low-lying coastal zones like southeast Florida increasingly difficult to maintain infrastructure services for and increasingly vulnerable to hurricanes and storms.

Most models of projected sea level rise assume a gradual acceleration of sea level in line with gradually accelerating ice melt. But our knowledge of how sea level rose in the past paints a very different picture of response to climate change.

At the peak of the last ice age 18,000 years ago sea level was some 420ft (128m) lower due to the vast quantities of water locked away in continental ice sheets. Subsequent ice melt was not a gradual process, but rather a series of very rapid pulses of sea level rise interspersed with pauses in which coastal environments formed. During pulses the seas rose between 3-30ft (0.9-9m) fast enough to drown not just reefs, sandy barrier islands, tidal inlets and other coastal features, stranding their remnants across the continental shelf, now disappeared beneath the ocean.

The cracks are showing

That is what happens when climate change warms enough to destabilise some ice sheet sector. It rapidly disintegrates, resulting in a rapid rise. This is what is beginning to happen to the Greenland ice sheet, where surface melting has concentrated dust and black carbon in the ice on the melting surface darkening and further accelerating the surface melt.

More importantly, warmed ocean water has accelerated the ice melt at both poles, working its way into the glacial fjords under the ice sheet in Greenland and under the outlet glaciers around the Antarctic ice sheets. While this “warm” water is only 2-4°C, even this moderate heat is capable of vast amounts of ice melt, and once started, the melt creates positive reinforcing feedbacks that speed the acceleration far beyond anything originally anticipated.

Water on the melting ice surface adsorbs more heat which accelerates the surface melt. Meltwater percolating down through the ice lubricates the base permitting faster motion, which results in more extensive fracturing, in turn allowing more, warmer water through the fractures and into the interior of the ice sheet, and so on. We are most certainly witnessing the onset of a rapid pulse of sea level rise.

The view from above

Flying 50 miles over Greenland’s interior last summer, the Jacobshaven (or Ilulissat) Icefjord looked like the bed of a giant meandering stream carved on the surface of the ice. The bottom of the channel, some 500ft (152m) below the level of the ice sheet above was moving faster than than the ice above, having been penetrated by the warmed ocean water. As a result the ice has dramatically fractured and has accelerated, from moving a couple of miles in a year to over 20. A spectacular but most disturbing experience.

Even if we stopped burning fossil fuels tomorrow, the greenhouse gasses already in the atmosphere will continue to warm the atmosphere for at least another 30 years. And as most of this heat has already been absorbed by the oceans, which have the capacity to store heat for centuries, the overall effect on ice sheet melt will continue for centuries, accelerating all the way. If we are at just 5ft (1.5m) rise at the end of the century, sea level will be rising at a foot per decade – think about trying to maintain a port facility anywhere with that.

To consider the risk in present investments is beyond sobering. By the middle of this century most of the barrier islands of south Florida and the world will be abandoned and the people relocated, while low areas such as Sweetwater and Hialeah bordering the Everglades will be frequently flooded and increasingly difficult places to live. Florida will start to lose its freshwater resources, its infrastructure will begin to fail, and the risk of catastrophic storm surges and hurricane flooding will increase.

Florida counties should be planning for their future to determine at what point the costs of maintaining functional infrastructure, insurance, and human health and safety becomes economically impossible. Already, there are areas and properties that will become unlivable within a 30-year mortgage cycle. The Four-county Compact on climate change in southeast Florida has some 1,200 action items to help ensure some stability for the communities there.

For south Florida, forget the levees and dikes. That may be fine for New Orleans and the Netherlands, but not here where the limestone and sand under our homes is much too porous and permeable. For each day action is put off, it becomes harder and more expensive to make the inevitable changes required. Without planning, there will come a point where society will collapse into chaos.

Harold R. Wanless is Professor and Chair of Geology at University of Miami

Harold R. Wanless does not work for, consult to, own shares in or receive funding from any company or organisation that would benefit from this article, and has no relevant affiliations.