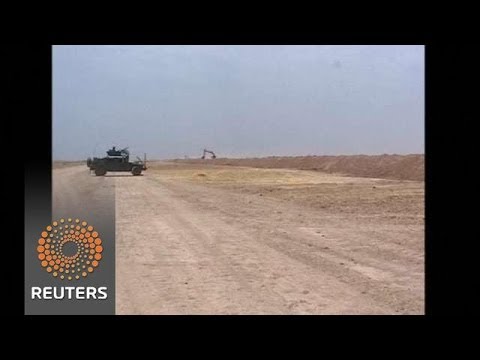 1. Airstrikes killed 7 and wounded 30 in Mosul on Sunday. But it isn’t clear who was flying the planes! The US denies it was Americans, and the spokesman for the Baghdad government said he did not know anything about it. The Syrian and Iranian air forces are other possibilities. It is likely the Iraqi air force, but it is alarming that you have anonymous airstrikes in a country.

2. 2-3 Iranian military men are now reported by hard line Iranian sites to have died fighting to save the Shiite shrine in Samarra from being destroyed by the so-called “Islamic State”, a radical, violent Salafi group. Here is another such report. Iran initially denied it had boots on the ground, but there are growing reports of such (and small special ops Iranian forces previously operated in the same ways in Syria).

3. Hard line Shiite cleric and politician Muqtada al-Sadr said it would be positive for Iraq if Prime Minister Nouri al-Maliki, a contentious figure, steps down. But he said that the new prime minister should be from the Da’wa Party headed by al-Maliki, since it and its small allies won the most seats in parliament under the State of Law rubric. It is not clear that anyone in the Da’wa Party would oppose al-Maliki or who exactly might emerge from the party as PM. Meanwhile, Iran is said to have doubled down on al-Maliki!

4. Although the so-called “Islamic State” has destroyed several Sunni, Sufi and Shiite shrines and places of worship in the past month, probably the most significant is the tomb of medieval saint Ahmad al-Rifa`i (d. 1183 AD). The Rifa`i Sufi order claims him as its founder. Sufis practice meditation and chanting and they seek mystical union with God. There are plenty of Rifa`is in Syria and the order is popular in Egypt, and still has adherents throughout the Muslim world,from Bosnia to Gujarat. IS is not making a good reputation for itself in most of the Sunni world, where there is still respect for mystics like Rifa`i. One of its allies of convenience is the Naqshbandi Sufi order in Mosul, members of which won’t be happy about all this shrine-bashing. This gives you the flavor of how a lot of Sunnis responded:

Absolute filth! ISIS, full of Shayateen! Destroying the grave of one of the greatest Imams, Sayyid Ahmad al-Rifa`i!

5. Dr. Ibrahim al-Badri of Samarra, who has convinced himself he is a medieval caliph named Abu Bakr al-Baghdadi, gave a Friday sermon last Friday. He said he was humble and asked for advice and corrections of his behavior. Twitter advised him not to sport a $7000 watch in the midst of the economic depression into which his group has thrown much of Syria and Iraq. Also, he might want to give up the serial killer and mass murderer gigs, which aren’t really appropriate to a holy man. There was other ridicule among the tweeps.