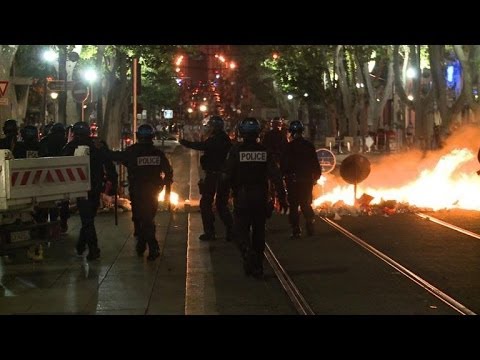 When Algeria qualified for the knockout stage of the World Cup by winning against Russia, the Algerian press celebrated their team’s qualification as the greatest victory ever. In France large street celebrations were accompanied by the usual firecrackers and Algerian flags and were followed by clashes between groups of so-called supporters and the police. No really serious incident occurred, but that did not prevent extreme right groups such as Bloc Identitaire from conducting an intoxication campaign which drew systematically on the manipulation of images and wild rumours. Its supporters claimed that in the Lyon suburb of La Duchère, a church had been set on fire and that a building in the Barbès district of Paris was festooned with Algerian flags. No church had been set on fire and the building turned out to be in Algiers.

The extreme right National Front, which topped the poll in last month’s European election was happy to oblige, its leader Marine Le Pen asking that Algerian bi-nationals be deprived of their French citizenship. Fearing greater violence after the match between the Algerian and German teams on 30 June, the Ministry of the Interior put 25,000 police on the streets of major cities and the mayor of Nice banned the “ostentatious deployment” of foreign (i.e Algerian) flags. Algeria went down to an honourable defeat and the streets of France remained quiet.

Algeria’s victories against South Korea and Russia brought out the dormant pétainisme which characterises part of the French right (Pétain ran the fascist German-dominated government of the 1940s) . Arthur Asseraf noted that many French scholars and commentators only approach French colonies (and really, mainly Algeria) as a black box to solve problems of French history. “This is dangerous because Algeria ceases to be a real place where people live, breathe, hope, dream, and die, and instead becomes a mere problem or concept of French history. Approaching this subject through the prism of an interest in France, the kind of scholarship tends to exceptionalize France’s colonial and postcolonial history, without connecting it to developments elsewhere”(1). France ruled Algeria 1830-1962 and millions of Algerians, Arabs and African guest workers from the colonies came to France as immigrants. The victory of the French team in the 1998 World Cup allowed France to dream, for a few short months of la France Black, Blanc (white), Beur (Arab-French), a country that had integrated its many African and North African immigrants.

In the wake of 9/11 and the violent riots which engulfed France in the autumn of 2005, the mood changed as the French right took to wallowing in self-pity and xenophobia. More recently, many French media have indulged in an orgy of self-flagellation, with weeklies like Le Point decrying the decadence and collapse of the country. Radio commentators such as Eric Zemmour compliment the French coach Didier Deschamps for having re-established “rigor, order and hard work… traditional values of French peasant society”, oblivious to the fact that many of the French players are immigrants from Africa. The philosopher Alain Finkielkraut decries the delinquent suburbs where these players were brought up which are destroying the spirit of the city. The non-assimilated immigrant (it would have been the Jew in 1939) is the perfect foil for such feelings. Because of its close ties with France since it was conquered in 1830, and colonised until 1962, Algeria has become the inevitable “black box of French history”.

The emergence of Islam as one of the several languages of protest in the western world is not confined to France. It draws on Europe’s colonial past but also on contemporary global trends. The author of a recent book on relations between France and its north African immigrants tells us that French Muslims are “at war with France.” How can he possibly know 8 million Muslims, who are an extraordinarily mixed lot socially and in terms of their country of origin think? No where in the book is there any mention of Imazighen (Berbers) who are North African but not Arabs. He seems to think all North Africans in France and in the Maghreb are anti-Semite, displaying in the process a deep ignorance on modern Algerian history. He summons up many ghosts – colonialism, the Algerian war, Palestine, Islam and is at a loss to know what to make of them except that the Arabs are somehow involved in a vaguely outlined global insurrection..” He claims that Algerian supporters shouted “yaya djezair” (actually it would have been tahya al-djazair– i.e. Long Live Algeria). One is left wondering whether he really cares what they are saying in a language he does not understand.

What is happening in France is not unique to that country nor is it part of a global “Fourth World War.” France, the reader is told, might not need “ a psychiatrist but an exorcist” to shoo away the ghost of Algeria. As he resorts to a supernatural analysis in the first place, that is hardly surprising. His misreading of modern north African history is breathtaking: To suggest that the Tunisian people only evicted Ben Ali as a way of getting back at France is absurd and tragically reductive. As he draws sweeping conclusions from talking to a Moroccan in a bar in Tangiers of a taxi driver in Algiers, the reader could be forgiven for thinking that North Africans are not agents of their own history. Some assertions are simply absurd when the author tells us that Algiers shuts down at night unlike any other Mediterranean city except Gaza. He is in good company as France has the intellectuals it deserves: towering figures such as Camus, Simone de Beauvoir and Claude Levi Strauss have been replaced by midgets.

None of those who seem to fear an invasion of France by its colonial subjects, not least the Algerians, care to remind their audience that the poor banlieues or slums include millions of impoverished Portuguese and French people; that millions of young men and women of North and Black African origin people are married with men and women whose families have been French for generations; that millions of them have managed to get a good education and hold good jobs; that the mixes of Algerian and Black African hip-hop songs often top the charts, pointing to a rich culture which these gentlemen hold in deep contempt. As they attempt to frame every single action of North Africans as a violent insurrection against civilisation, they condemn themselves and their listeners to misreading current events in France. They display a contempt for historical facts, oblivious of the rich shared life between France and North Africa. They believe there can be no cohabitation and no forgiveness. Charles Martel famously stopped the Arab armies at Poitiers in 732 AD and history has been frozen since then.

What most of the world calls football (soccer) has offered a means of social advancement to the children of immigrants. The French team boats more and more children from the banlieues. The Algerian Football Federation has encouraged players of Algerian origin who live and play abroad to play for the mother country so to speak on grand occasions such as the World Cup. Recognising the what its diaspora can offer Algeria should be extended to other professional sectors of Algerian life, notably in economic and business matters. It would be naïve to think that football and politics can be kept a part anywhere in the world of multiple identities. Football, especially during the World Cup may be presented as a childish metaphor for war but millions of spectators on both sides of the Mediterranean will enjoy the spectacle if affords, oblivious of the inaccurate suggestion that it forms the backdrop to some ill defined intifada against la belle France.

(1) Arthur Asseraf – The Black Box of French History, Jadaliyya 29 May 2014
(2) Andrew Hussey, The French Intifada: the long war between France and its Arabs, Granta 2014

Francis Ghilès is senior research fellow at the Barcelona Centre for International Affairs (Cidob). He was the Financial Times’s north Africa Correspondent from 1981-95, and now contributes to newspapers such as the New York Times, Wall Street Journal, Le Monde, El Pais and La Vanguardia. He is a specialist in emerging energy markets and their relationship to political trends, and has advised western governments and corporations working in North Africa.