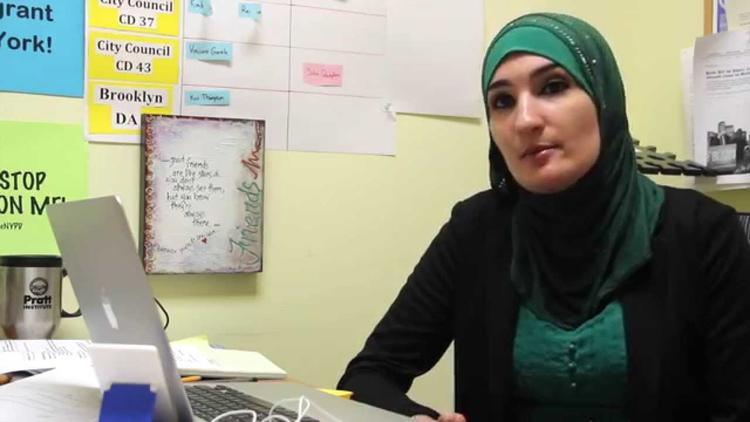 “[This week]… several members of New York City’s Arab-American community filed into the Good Shephard’s Lutheran Church in Bay Ridge, Brooklyn for the launch of the Take On Hate campaign, a media and policy campaign orchestrated around tackling perceptions of Arab and Muslim-Americans in the United States. In addition to tackling representations of Arabs and Muslims in the mainstream media, the campaign’s organizers hope that the campaign unites Arab and Muslim-Americans across the country to push for policy changes that would address hate crimes, racial profiling, acceptable bigotry and other issues that impact the community.

“We are asking for elected officials and policy makers to take on hate with us in two ways,” said Nadia Tonova, Executive Director of National Network of Arab American Communities.

“One is to take proactive measures to protect our communities — things like passing a hate crimes task force,” she continued. “The second is to change policies that allow for profiling and discrimination of our communities.”

New York City is home to the largest Muslim-American population in the country and the third largest Arab-American population in the country. In just the past few months alone, an Egyptian food vendor was stabbed after being told to go back to his country. One young woman wearing hijab was spat on, and called a terrorist on a bus in Queens. Right across the river, in Paramus, N.J., many are rallying against a plan to build a mosque in an increasingly Muslim community. Nationally, it was just revealed via a report from the Intercept that “Mohammed Raghead” is used by the National Security Agency as a placeholder name to justify warrantless surveillance of Muslim-American leaders.

“At least once a week we hear about someone getting kicked off a bus for speaking in Arabic,” said Lena Al-Husseini, Executive Director of the Arab American Family Support Center. “My own son, when he was in third grade, his classmate said, ‘Oh, you’re Arab? My mom says you’re a terrorist!’”

In addition to sharing stories and drawing more attention to isolated incidents of hate and bigotry, the policy changes that the Take On Hate organizers are looking to push would address concerns at the core of the community. A Hate Crimes Task Force would mandate investigations of racially-motivated hate crimes, a frequent occurrence in the Arab and Muslim-American communities. Other policy changes addressing profiling would include an end to warrantless FBI and NSA surveillance of Muslim-American communities and mandatory second screenings at airports.

“We have the power,” says Arab American Association of New York Executive Director and community civil rights activist Linda Sarsour in the promotional video. “We have the power. We have the capability and the opportunity here to change the way our society views our community to create a society that accepts our children and allows them to be proud of who they are as Arab-Americans and/or Muslim-Americans.”

Anna Lekas Miller is an independent journalist interested in Palestine, the Middle East and creating a socially just foreign and immigration policy among many other things. She has written about topics ranging from feminism and foreign policy to racial justice and food policy and tweeted from the front lines of both Occupied Wall Street and Occupied Palestine. Follow her @agoodcuppa

This article was originally published at Waging Nonviolence and appears here courtesy of a Creative Commons license.