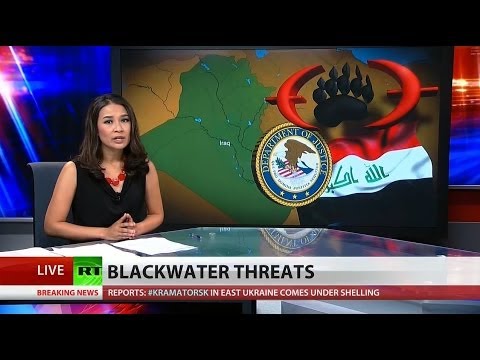 As the trial continues against Blackwater mercenaries accused of a bloody massacre that took place in Iraq in 2007 and left seventeen civilians dead, new documents reveal that just weeks prior to that incident a State Department investigation into the practices of the private military company was cut short after threats of deadly violence.

According to [James Risen of] the New York Times on Monday, citing previously unpublished State Department documents, the internal "inquiry was abandoned after Blackwater’s top manager there issued a threat: 'that he could kill' the government’s chief investigator and 'no one could or would do anything about it as we were in Iraq.'"

The documents and Times reporting detail how the behavior of the military contractors concerned the investigative team sent to Iraq to assess their peformance and protocols, but that efforts to make changes were rebuffed by Blackwater operatives and embassy personnel who "had gotten too close to the contractor."

“The management structures in place to manage and monitor our contracts in Iraq have become subservient to the contractors themselves,” wrote one investigator, Jean C. Richter, in an Aug. 31, 2007, memo to State Department officials. “Blackwater contractors saw themselves as above the law,” he said, adding that the “hands off” management resulted in a situation in which “the contractors, instead of Department officials, are in command and in control.”

Though none of the men involved responded to requests for comment from the Times, the incident is documented clearly inthe Richter's memo and corroborated by Thomas' testimony. According to the newspaper:

[Richter and Thomas] met with Daniel Carroll, Blackwater’s project manager in Iraq, to discuss the investigation, including a complaint over food quality and sanitary conditions at a cafeteria in Blackwater’s compound. Mr. Carroll barked that Mr. Richter could not tell him what to do about his cafeteria, Mr. Richter’s report said. The Blackwater official went on to threaten the agent and say he would not face any consequences, according to Mr. Richter’s later account.

Mr. Carroll said “that he could kill me at that very moment and no one could or would do anything about it as we were in Iraq,” Mr. Richter wrote in a memo to senior State Department officials in Washington. He noted that Mr. Carroll had formerly served with Navy SEAL Team 6, an elite unit. . .

Mr. Thomas witnessed the exchange and corroborated Mr. Richter’s version of events in a separate statement, writing that Mr. Carroll’s comments were “unprofessional and threatening in nature.” He added that others in Baghdad had told the two investigators to be “very careful,” considering that their review could jeopardize job security for Blackwater personnel.