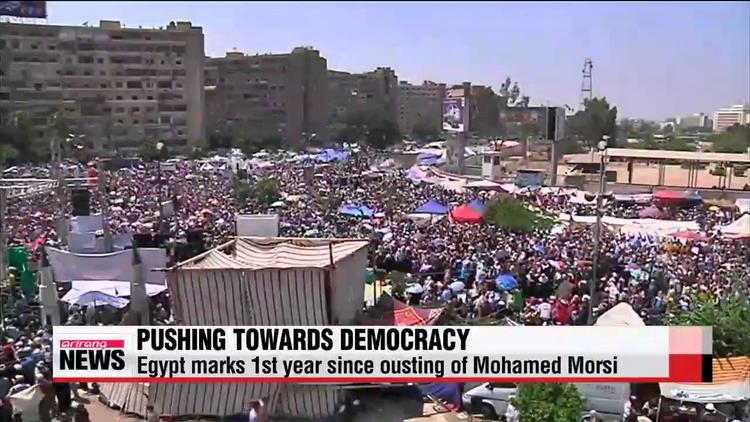 Former British Prime Minister Tony Blair has agreed to advise the government of Egyptian President Abdel Fattah al-Sisi. Blair maintains that he will not be paid to do so, but critics suggest that he will have an opportunity to engage in influence-peddling with British firms investing in Egypt. Blair is rumored to make $30 million a year from consulting and business deals.

That a former prime minister of a major European democracy should publicly associate himself with the regime of al-Sisi is shameful. Al-Sisi has ordered a brutal crackdown on Muslim Brotherhood sit-ins that left over a thousand dead and went on to have some 20,000 Muslim Brotherhood members and supporters arrested. Dozens of major Muslim Brotherhood figures have been arbitrarily condemned to death, often without much in the way of formal court proceedings (presentation of evidence, ability to face one’s accuser, etc.). The government has also turned on the progressive youth movements that demanded a recall election last year this time, jailing dozens of prominent youth leaders for daring to engage in unauthorized protests. But unauthorized protests were precisely what allowed al-Sisi to come to power.

One of the attractions for Blair in working with the United Arab Emirates and al-Sisi is apparently that the latter two have turned against the Muslim Brotherhood. Blair is a profound Islamophobe and hates the Muslim religious Right, even though he has been perfectly happy to shill for the Christian religious Right. Al-Sisi has declared the Muslim Brotherhood a “terrorist organization” despite the group’s decades of peaceful organizing and avoidance of violence. Saudi Arabia and the UAE have also lobbied the UK government to investigate the Brotherhood in Britain as a terrorist group.

Since Blair was so good at railroading Iraq on false charges of having weapons of mass destruction, he no doubt has been hired in part to do a similar number on the Brotherhood. (The Muslim Brotherhood and I don’t share values, but they are not terrorists and there are no grounds to exclude them from a legitimate role in a democratic society. If the Morsi group committed crimes while in office, they should be tried, but you can’t inflict collective punishment on the whole organization).

The Muslim Brotherhood has many flaws, from a Liberal point of view, but it actually provided far more freedom of conscience and pluralism when in power in Egypt in 2012-2013 than does the government of Saudi Arabia. King Abdullah doesn’t dislike the religious Right. He *is* the religious Right.

So Blair has a big problem with the Brotherhood but none whatsoever with the Kingdom of Saudi Arabia, which is far more dictatorial and controlling on religious grounds than was President Muhammad Morsi. It all depends on how pliant you are toward the business and financial centers in the City, apparently.

Blair is highly selective in his outrage. In 2007 he notoriously took BP executives along on a trip to see Muammar Gaddafi in Libya. Blair praised the mercurial Brother Leader, saying that “There is nothing I’ve ever agreed with him that should be done that hasn’t been done.” Gaddafi was behind the blowing up of a civilian aircraft over Britain and had helped train the more violent elements of the Irish Republican Army, but all that was suddenly forgiven because Gaddafi would help fight “terrorism” (which is to say, Libyans who were insufficiently obedient) and would offer BP bids worth, ultimately, some $18 billion.

Egypt has electricity shortages and desperately needs to move quickly to solar and wind energy and away from hydrocarbons. But al-Sisi is now being advised by someone close to BP. Is Blair capable under these circumstances of advising al-Sisi impartially that Egypt should move rapidly to green energy?

Egypt’s tourism industry has been deeply damaged by the bombings and insecurity caused by al-Sisi’s marginalization of some 20% of the electorate. Al-Sisi should lighten up. If Brotherhood members were allowed back into the political process, that would make them less likely to be radicalized. Otherwise, getting the tourism industry going again will be an uphill battle. There were bombings this week at the presidential palace in commemoration of the anniversary of the 2013 “revocouption” (or popular protests plus military coup) against Morsi by al-Sisi.

Blair himself is said to have sold out to billionaire press lord Rupert Murdoch. That model, of saying you are for workers while you actually serve the 1%, was actually developed by the british governeent.

With his Neoliberal biases (urging privatization of public companies and goods) and his hatred of political Islam, Blair will reinforce the worst instincts of the current government. As he showed in his dalliance with Gaddafi, he is less interested in human rights than in profits for British firms. And that is likely the same trade-off he will make in Cairo.

Meanwhile, Ahmad Maher of April 6 and Manienoor El Masry of the Revolutionary Socialists languish in Gen. Sisi’s jails. Does Blair care about these youth leaders of the 2011 revolution, or are they now just inconvenient.