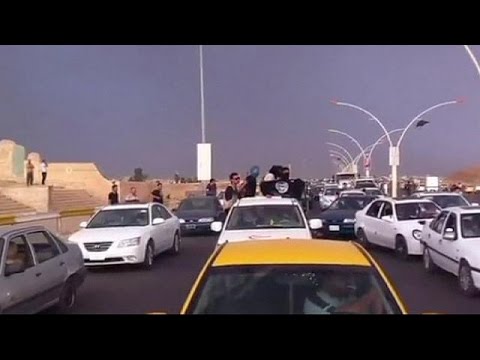 By Abdul Hamid Zebari via RFE/RL

Rawan Jinan, a 25-year-old Iraqi Christian, says when she received an order on June 18 to leave Mosul within 24 hours, she could not believe her eyes.

The order came in the form of a letter delivered to every Christian home by the Islamic State, formerly known as the Islamic State of Iraq and the Levant (ISIL), which rules Iraq’s second-largest city. The letter offered the recipients just three choices: to convert to Islam, to begin paying a monthly tax for practicing a religion other than Islam, or to be executed if they remained in Mosul.

Jinan, now in a refugee camp near Irbil, in the Kurdish autonomous region, says she and her husband stared at the paper in amazement. “We were prepared for anything, but we were not expecting to be banished from our city in this manner,” she says. “When we first heard Christians should leave the city, we thought this meant that Mosul was about to be targeted by heavy shelling. We did not know they were going to rob us and throw us out.”

The couple initially thought the letter was an evacuation, not expulsion, order because they and their two young sons — one 4 years old, the other 18 months — had already fled fighting in Mosul once. That was when ISIL captured the city in three days of combat that ended with the rout of the Iraqi Army on June 9.

But after that fighting ended, the family returned amid reports that the Islamic State promised to guarantee the safety of all religious minorities in the city, so long as they respected Islamic law.

At first, she says, the militants seemed almost protective. “They welcomed us, and asked us what we needed, asking us to contact them if anyone bothered us.”

In return, the city’s Christians saw no reason why they would offend the city’s fundamentalist new rulers. Christian women had already long been wearing the “abaya,” the figure-shrouding outer garment Muslim women wear for modesty outdoors, and both Christian men and women mostly stayed within their own neighborhoods to avoid trouble.

But the honeymoon period, which contrasted starkly with the Islamic State’s reputation for cruelty toward religious minorities in areas it occupies in Syria, did not last long. As soon as the militia was firmly in control of Mosul, the mood began to change.

Then, Jinan says, the militants began to enter Christian churches, intimidating priests and making people afraid to go to their places of worship. “They did not only enter the churches,” she says. “They also went into the shrine of Prophet Younis [the Old Testament prophet Jonas], which they demolished. They also demolished monasteries.”

The reported destruction of the tomb of Jonas was shocking for Mosul’s Christians and many mainstream Muslims alike, because he is revered by both faiths. The tomb itself is housed in a mosque built on a site where a church once stood, and the interlayering of faiths around the site had long been a symbol of Mosul’s tradition of religious tolerance.

On July 16 and 17, Jinan says, a black painted symbol began appearing on Christian homes. “They began marking Christians’ homes with the letter ‘N’ within a circle and the phrase ‘property of the Islamic State.’ When we asked why, they said that ‘this would ward off anyone coming to loot [your home] because looters will fear that this house belongs to us. You need not be afraid; there’s nothing wrong,'” she recalls.

But the Christians were feeling terrorized. The letter N stood for “Nasrani,” a term used for Christians in the Koran that refers to Nazareth, the hometown of Jesus Christ. By this time, the Islamic State was also replacing the crosses atop some churches with their own black jihadist flags, as if they had been seized in a holy war. “I saw the flags on the Orthodox Mar [St.] Ephraim Cathedral and the Chaldean Bishop’s Seat,” Jinan notes.

Driven From Their Homes

When the order with three choices came, Jinan says she and the other several thousand Christians in the city had no trust left in the Islamic State. She personally did not even inquire about the amount of the “jizya,” or religious tax, the militants promised would grant Christians immunity. The amount has been variously reported by other refugees as being around $100 monthly.

Instead, Jinan and her husband rushed to get their sons and fled by car to one of the Christian towns to the east of Mosul on the Nineveh plain. From there, they proceeded on to the greater safety of Ayn Kawa, a town just inside the Kurdish autonomous region where they remain today.

The Kurdish autonomous region, which is religiously tolerant and is guarded by its own powerful security forces, puts her beyond the reach of the Islamic State. But Jinan says she and most other refugees lost many of their possessions to the Islamic State’s fighters, who shook them down as they fled from Mosul.

The fighters took the money her husband was carrying and searched their luggage thoroughly, stealing clothes and even baby diapers. They also treated their victims with open contempt. “They opened the can of baby milk and poured its contents into the street,” she says. “We begged them to give us a bottle of water for the children, to quiet them, but they opened the water bottles and poured out the water in front us.”

Now, with Mosul less about 80 kilometers to the west but her former life closed to her, Jinan says she doesn’t know what to expect next.

Her options range from waiting for the Iraqi government to retake Mosul — something she calls unlikely when the Islamic State is at the gates of Baghdad — to emigrating, something she says she never had to consider before.

Her only certainty is that her family now would not want to return to Mosul even if it could. “No Christian, and I for one, will return to the place where I lived, where I was persecuted, and from which I have been expelled,” she says.