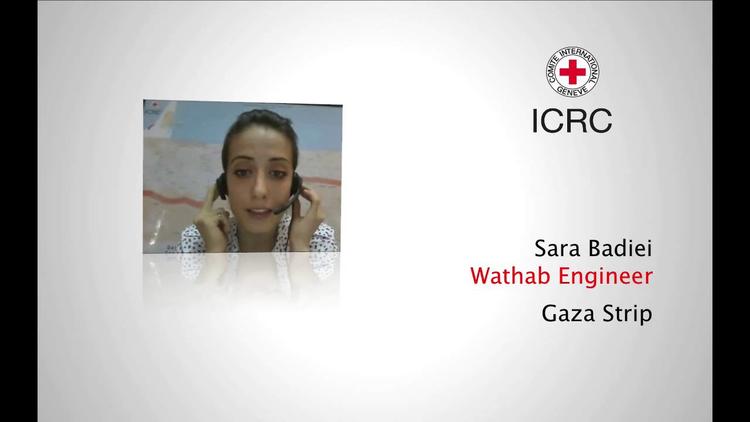 Gaza – Bassem Siam carried two plastic gallons as he left his home in the Sheikh Radwan neighborhood in northern Gaza, ignoring the intense bombardment and the continued Israeli military flights. He went to his neighbors who happen to have a small supply of drinking water to get a sip of water for himself and his family and to help his wife wash the dishes that have accumulated in the kitchen because water has been cut off for two days. The 30-something-year-old man held the two gallons tightly to his chest and returned home quickly as Israeli planes bombed farm land near his home. When he entered the building where he lives, he exhaled deeply, having survived the devastating missile shrapnel.

In addition, three main water lines that feed al-Shujaiya and al-Sabra neighborhoods and provide about 21,000 people with water were also hit.
Thousands of Palestinians in Gaza live under the threat of water scarcity due to the fact that Israeli fighter jets bombed wells that provide water to several residential areas in the Gaza Strip. Municipalities in charge of these wells believe that the Israeli targeting of wells is motivated by a decision to destroy the infrastructure in Gaza and to undermine the people’s ability to remain steadfast.

This targeting appears to be systematic and its obvious objective is to deprive people of water, the single most important element of daily life, especially during the month of Ramadan.

According to the head of the water facilities at the Gaza municipality, Saad al-Din Atbash, it is very difficult to repair the destroyed wells amidst the ongoing violence. Not to mention that the cost for each well to start working again at the same capacity it was working before is $120,000. “In addition, the cost of repairing the three water lines that were damaged is about $6,000 for each line,” he added.

In light of the ongoing war and siege of Gaza, it is hard for the municipality to repair these wells and water lines, Atbash confirmed. He also noted that the electric cables which operate the well pumps that feed the industrial area to the east of Gaza city (known as Karni) have been burned. These pumps provide water to about 5,000 people. He confirmed that the crews working in the field have repaired what can be repaired in order to distribute water again, even if on an intermittent basis. He warned, however, that these crews are working in unsafe conditions because the Israeli military targets emergency work crews.

Gazans are starting to complain about the water shortages that last for days at a time, forcing some of them to fill up their home water tanks with desalinated water to use for drinking, cooking, washing and cleaning. The problem, however, is that the distributors of desalinated water were directly targeted more than once during the 2008 Israeli war on Gaza. Not to mention the additional cost of buying desalinated water which doubles people’s water bills. In addition, several purification water plants announced their inability to provide services to residents, especially to those living in border areas.

Fadi Omran, one of the desalinated water distributors, tells Al-Akhbar: “We can’t risk our lives and go out in the evening. We are trying to work during the day but we don’t have enough time to meet the needs of all the people.” Omran, who drives a huge truck, explained that the Israelis do not differentiate between civilians and Resistance fighters, “they target any moving object at night.” He said that fear for their lives forces them to delay delivering their customers’ orders. In addition to the fact that his plant works only when there is electricity.

This targeting appears to be systematic and its obvious objective is to deprive people of water, the single most important element of daily life, especially during the month of Ramadan.
This situation prompted the director of the water department in the Gaza municipality to call on people to ration their water consumption “until the damaged waterpipes and water wells are repaired.” He also called on international organizations to intervene in order to prevent Israel from bombing the infrastructure in the Gaza Strip.

On the evening of July 12, Israeli warplanes targeted a vehicle that belongs to the non-governmental Coastal Municipalities Water Utility near its well located to the west of Rafah in southern Gaza. The bombing killed a 42-year-old employee called Ziad al-Shawi, destroyed his car completely and seriously injured two of his colleagues.

Because of this incident, the general director of the utility, Monzer Shiblak, announced the complete suspension of work at the field water utility after the targeting of its staff, “despite the existing coordination with the Israeli side. The suspension will continue until proper field protection is provided for the employees.” At the same time, he expressed commitment to see his utility persist in its vital duties towards the public and in carrying out its water and sanitation services to the best of its ability.

During a press conference, Shiblak called on international humanitarian organizations, especially the International Committee of the Red Cross (ICRC) and the United Nations Office for the Coordination of Humanitarian Affairs (OCHA), to assume their responsibilities and take action to protect the Coastal Municipalities Water Utility and pressure the Israeli side to stop targeting their crews and the municipalities’ crews.

According to observers, warnings have been issued regarding the consequences of subjecting Palestinians in Gaza to health and environmental catastrophes as a result of the Israeli bombing of sewage pump no. 1. This pump services the area to the west of the city of Gaza and treats about 15,000 cubic meters of wastewater per day, thus protecting about 200,000 of the city’s residents from the potential harm of untreated sewage water.

International Committee of the Red Cross (ICRC), “Damage to water infrastructure endangers everyone in Gaza”