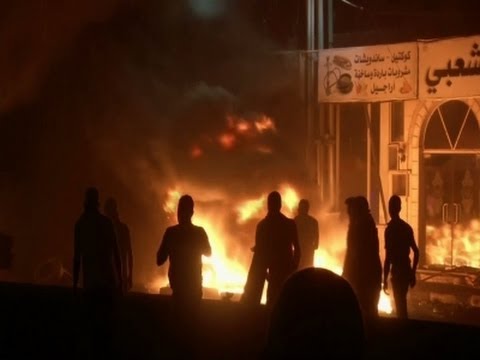 A new element entered the current Gaza war on Thursday, as Israel shelled a UN school full of displaced persons taking refuge there and large protests broke out in the Palestinian West Bank. The shelling of the UNRWA school, which killed 15 and injured 200, was a war crime. The UN had given the school’s coordinates to the Israelis, so they knew it was a school and was holding displaced persons. The UN, when informed it would be shelled, asked for more time to evacuate people but were denied it.

Some 10,000 Palestinian protesters marched from the Amaria refugee camp near Ramallah toward Jerusalem, stopping at the infamous Apartheid South Africa-style Qalandia checkpoint that often bars or makes difficult and time-consuming Palestinians access to the third holiest city in Islam. The crowds threw rocks and bottles at the Israeli troops, who replied by firing into the crowd, killing two young men and wounding others.

The march had been called for, in part in reaction to the shelling of the UN school, by “youth groups” and “popular organizations.”

The primary hospital in Ramallah said that they had admitted dozens of “live fire victims.”

Protests were also held in towns throughout the West Bank. There are roughly 2.3 million Palestinians in the West Bank, but they are denied the basic rights of citizenship in a state and are kept stateless and under military occupation by Israel.

There have been demonstrations and protests every night in the West Bank, which is mobilizing against the attack on Gaza in ways it did not in 2012.

Thursday’s demonstration at Qalandiya was the biggest since the 2nd uprising of 2000-2005. The first uprising broke out in the late 1980s and led to the Oslo Peace Process. That process was deliberately destroyed by Binyamin Netanyahu, something he has boasted about on video. The buzz on the web is about the possibility of a third uprising.

The Night of Power is the holiest night in the Muslim calendar and involves people staying up late to pray.