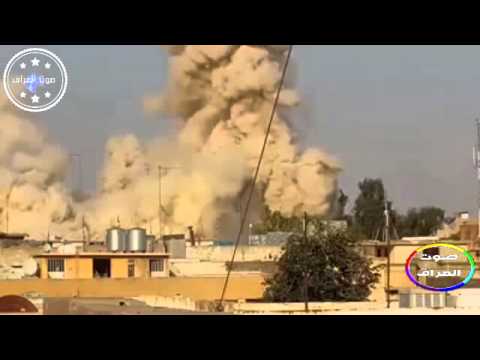 The Islamic State initially exhibited some restraint after entering northwestern Iraq in June, focusing on establishing control of the territories it held and gaining the trust of local Sunni communities. But as the self-declared caliphate has grown more comfortable in its surroundings, it has revealed its radical aims by destroying anything that conflicts with its strict interpretation of Islam.

This includes turning historical religious sites and landmarks to dust. Most are Shi'ite, but any religious site — whether Christian, Sunni, or other — is at risk if it is deemed a center for apostasy, and not prayer.

Following reports that Islamic State militants (then known as the Islamic State in Iraq and the Levant) had seized the western Iraqi city of Tal Afar, images emerged on the group's purported Twitter page of Shi'ite places of worship that had been destroyed.


Three Shi'ite shrines and three mosques were destroyed in Tal Afar in late June (the shrines of Khader Elias, Imam Saad bin Aqeel, and Ar Mamut, and the mosques of Imam al-Hakim, Ahel al-Bayt, and Hussienieh Sadiq [Al Julaq]), according to Shaffaq news.

Mosul, capital of Nineveh Province, has been at the center of the Islamic State's war on holy sites in recent weeks.

Mosque of the Prophet Jonah (Younis)

This massive complex holds the tomb of the Prophet Jonah, who in both the Koran and Bible is depicted as being swallowed by a whale. The site is held sacred to Jews, Christians, and Muslims alike — that is, it was held, until the Islamic State got to it.

Militants built a wall of explosives around the tomb and turned it to rubble on July 24.

Shi'ite Sheikh Muqtada al-Sadr, who returned to Iraq from Lebanon to defend Shi'ite religious sites, condemned the desecration of the tomb. "He was a prophet for all religions," Sadr was quoted as saying by Beirut's "The Daily Star Online."

Despite the loss, some are already looking forward to the day the tomb, which dated to the eighth century B.C., is rebuilt.

For centuries it stood as a symbol of diversity in #Mosul, #Iraq. Prophet Younis or Jonah 's shrine will rise again! pic.twitter.com/WUWSX0APf1

This is believed to be the burial site of Seth, the third son of Adam and Eve. Seth is a revered figure among Muslims, Christians, and Jews, and his ancient shrine stood in Mosul until it was blown to bits on July 25.

One resident who witnessed the explosion described the scene to AFP: "IS militants stopped people from coming close, set explosives in and around the shrine and then detonated them as a crowd looked on."

The day of July 25 was also the last for Mosul's ancient Awn al-Din Shrine, whose final moments were documented here.

Mosque of the Prophet Jirjis

The following day, the Islamic State turned to the Prophet Jirjis Mosque, which dated to the late 14th century, and included a small shrine.

Preparations for the destruction of the mosque, located on Mosul's right bank, were evident ahead of time…


…before images of the result emerged.

Crosses were removed from the Mar Behnam Monastery, built in the fourth century near the town of Beth Khdeda just south of Mosul, before Islamic State forces stormed the complex and gave resident monks and priests the option to flee or face death.

The monastery is still standing, albeit adorned with black flags, but fears are being expressed about the fate of the monastery and its relics.

Known as the "Hunchback Minaret" because of its extreme tilt resembling the Tower of Pisa, Mosul's Al-Hadba Minaret was pegged for destruction.


But according to recent reports, the minaret was saved by locals.

The Islamic State's sweep through Iraq led to calls for Shi'a around the world to come and defend holy sites.

Iranian President Hassan Rohani was among the first to signal his country's willingness to enter the fray. Iraq's top cleric, Grand Ayatollah Ali al-Sistani, appealed during Friday Prayers for all Muslim sects to stand together to protect Shi'ite shrines. Shi'ite cleric Sadr was among those to answer the call, settling in Samarra to defend the Imam al-Askari shrine.

In Samarra, the effort appears to have paid off. Rockets fired by militants at the revered Shi'ite shrine resulted in numerous casualties and 14 deaths in late June, but defenders of the complex have so far managed to hold off attempts to take it.

In 2006 and 2007, bombings of the site inflamed sectarian tensions, leading to thousands of deaths over the next two years.

The shrine was later restored to its former glory.