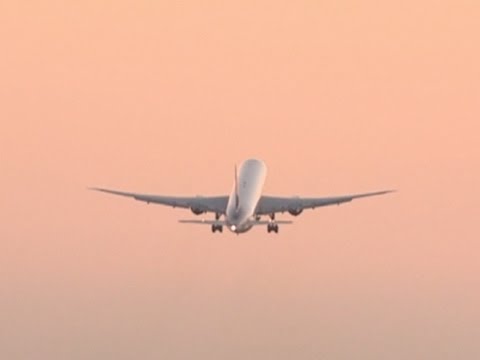 A Hamas rocket hit and destroyed a house in Yahoud, a town only a mile from Ben Gurion Airport in Israel on Tuesday, raising severe alarm in among the international airlines and leading most of them to cancel flights to Tel Aviv. The US Federal Aviation Administration called for a 24 hour moratorium on US flights to Israel, and United Airlines, U.S. Airways and Delta Air lines said they would cease flying there “until further notice.” The European Aviation Safety Agency likewise cautioned European airlines from flying to Israel, and Lufthansa and other major carriers cancelled their flights.

Israel’s Transportation Ministry, in its charming way, stridently denounced the airlines as accomplices of terrorists, saying “there is no reason whatsoever that American companies would stop their flights and hand terror a prize…” In fact, the downing of MH17 over eastern Ukraine is obviously the context for the airlines being spooked. And, if a rocket can land one mile from the airport, it can land on a plane at the airport just as easily.

Israeli tourism brought in $11 billion last year, some 4.5% of its nominal GDP. Tourism employs 100,000 workers, two-thirds of them in the hotel industry. In other words, a full loss of tourism would cost Israel $30 mn a day and could idle nearly 3% of the country’s workforce. (Since El Al is still flying, there hasn’t been a full loss of tourism, but El Al is probably flying many planes that aren’t full and may take an economic hit on that account alone; jet fuel is expensive and nowadays full planes are necessary to avoid losing money).

Here are the major countries of origin for the tourists last year:

A quarter of all visitors described themselves as pilgrims. Over half said they were Christians and a little over a quarter were Jewish.

Some observers assumed that the FAA and EASA decisions were made at the behest of political leaders in the US and Europe and were intended to pressure the Israeli government to wrap up its Gaza War. These allegations were denied by the two agencies. But then they would say that, wouldn’t they? The US State Department has also issued a travel advisory for Israel.

If the airlines cease flying to Israel for a long while, the economic pain would be great, a loss of hundreds of millions to as much as $900 mn. a month. It is likely that the business classes in Israel will begin pressuring PM Binyamin Netanyahu to end the Gaza engagement as soon as possible, given how bad it is for business.

The true significance of the airlines’ decision and that of the aviation regulation agencies lies not in its short term effect on the Israeli economy. Rather, it is a demonstration effect of how Israel is becoming vulnerable. When Netanyahu attacked Gaza in 2012, life and the economy went on normally in Israel. But in 2006 during the Israeli attack on Lebanon, Hizbullah rockets made fully a fourth of Israelis move out of their homes, away from the north, as they went to stay in with friends further south. But the rockets are gaining in range.

In essence, Hamas by targeting the airport (it wasn’t trying to hit a house in Yahoud but rather the runway at Ben Gurion International) has hit upon a new strategy, of imposing willy nilly an international boycott on Israeli aviation.

The airlines’ decision will likely motivate the Netanyahu government to attempt to disarm Gaza permanently and to attempt to make sure that Hamas can never again put the Tel Aviv airport in danger. But wanting to disarm Hamas and doing it aren’t the same thing. And once Israel leaves Gaza, what will stop Hamas from restocking?

Israel’s Likud government ought to (but won’t) take the opposite lesson from the airlines’ decision. It is that Israel is vulnerable economically unless it makes peace with the Palestinians by giving up its settler-colonial enterprise. It has to stop sending in squatters on Palestinian land and make preparations for pulling the settlers out.