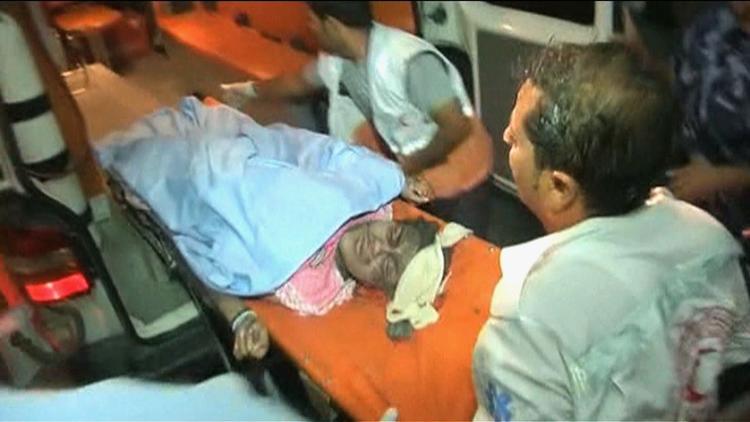 His whole life passed before his eyes like a film uncut by memory. He dived into the rubble of his home, hoping to find something to defeat the idea of his family’s death. But death is always stronger and here, the smell of blood fills the air.

Gaza – He calls them to slow down their march towards death but the sounds of their lives quiet down and their steps count down until zero hour. The hard truth appears in front of him, this earth can no longer hold them. A pile of dirt covers them, while he remains alone, devoured by sorrow. His fate is to be inhabited by pain, battling this life. This is the state we found the young Gazan man, Yasser al-Hajj, in. Beating his hands against each other, he is lost between the names of his family members, not knowing whom to cry over first.

It was 2 am when the noise of Zionist madness grew louder above the home of the Hajj family. Israeli warplanes dropped their venom on them without prior warning, as they were trying to steal a few moments of rest after a raucous day bursting at the seams with the tales of death. In a blink of an eye, the moments turned into a journey of eternal sleep, a journey that took away all the members of the family.

Only minutes kept Yasser from joining them on the train of death. He was about to enter his home in Khan Younis in southern Gaza, but the Israeli bombing got to his family before him, turning them into charred corpses and scattered carnage.

Mahmoud, Bassima, Asmaa, Najlaa, Tarek, Saad, Omar and Fatima, names worn out by this life and transported to the other, more expansive side. These people are Yasser’s little world, his parents, brothers and sisters. They lie now in front of him, bidding their final farewell before disappearing forever.

Yasser thought his eyes were deceiving him when he saw his mother Bassima (53 years old), with her legs cut off by the bombing. He was looking hysterically for the limbs and heads of his younger siblings. In a voice full of pain and sorrow, he told Al-Akhbar: “Life has no meaning after their death. I don’t know how I will adapt to this harsh reality. Everyone I shared my life and my feelings with are gone and I am left alone here.”

He wonders: “What objectives did the Israeli government accomplish? Killing unarmed civilians while they are sleeping is going to eradicate the seed of Resistance? On the contrary, the Resistance will grow stronger and we ask the Resistance forces to take revenge. My family’s blood is not cheap.” This is how Yasser will spend the rest of his life, haunted by the ghost of his family.

Yasser is not the only one whose entire family has been killed in this war. There are dozens of similar stories all over Gaza, even if the details differ. Sixteen-year-old Housam Ghannam shares Yasser’s fate except Housam is lying in the intensive care unit in the European Hospital in Khan Younis, his young body suffering from a serious injury.

After the dawn call for prayer last Friday, the sound of a huge explosion shook the Yibna refugee camp in Rafah in southern Gaza. The camp residents were awoken by the sound to find that the three-storey home of the Ghannam family had disappeared. His mother, father, grandmother and two little sisters were among the dead. They were all pulled from under the rubble amidst a giant cloud of smoke.

One eyewitness told Al-Akhbar: “F-16 warplanes fired three missiles at the house without a warning missile. The sight was harrowing as the house was leveled to the ground, erasing the identities and features of the family members, leaving only dismembered body parts behind.”

Despite everything, many Gazans have tried to overcome this bleak reality. As the attention of the world turned to Brazil and people were mesmerized before TV screens watching the world’s most important football event, Gazans followed suit. They have tried to carve out room for fun in the middle of a place enveloped by tragic news. Ibrahim and Mohammed Qanun, Suleiman, Ahmed and Mousa al-Astal, Hamdi, Ibrahim and Salim al-Sawali and Mohammed al-Aqqad, brought together by their passion for football, found death waiting for them.

They went out last Wednesday evening to get ready for the Argentina – Netherlands game and to have a good time in the town of al-Qarara on the coast of Khan Younis. The missile that targeted them turned this football celebration into a funeral and took all the fun away from them. Mohammed al-Sawali, brother of the three martyrs told Al-Akhbar: “I ran to the cafe to find my two brothers Ibrahim and Hamdi as still corpses. I kept looking for my brother Salim whose body I found the next day.”