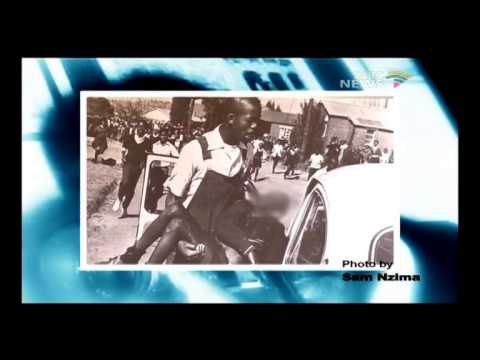 Here is a summary of the June 18 NYT article on the repression of the protests:

“Rioting continues for 3d day in Soweto, black township outside Johannesburg, with rioters, mostly young, directing fury at govt bldgs and vehicles. Death toll continues to mount as more than 1,000 armed policemen move into township sts. Official casualty toll put at 58 dead and 788 injured. Only 2 of dead and 5 of injured are white. Rioting is most serious in nation since Sharpeville massacre in ’60. There is widespread feeling that repercussions could be even greater.Gen W H Kotze, police comdr, sees no end to violence. Battle between police and rioters described.”

The students were protesting (white people said “rioting”) because the minority white government had decided that they suddenly would have to study not in English but in Afrikaans, a form of Dutch. Most of them did not know that language and did not want to know it, then seeing it as the tongue of hated colonialists who had deprived them of citizenship in a state and left them stateless.

The summary for the lead article by John F. Burns on Saturday June 19 reports, “Prime Min Vorster says there is ‘no reason for panic,’ TV and radio speech. Declares Govt will not be intimidated. Says instructions have been given to maintain law and order at all costs.” Already 60 had been killed and more than 800 wounded according to the government, but officials admitted that the toll on day 3 was likely far higher. It ends, “Fact that almost all of black leaders who might have influence with radical elements among rioters have been imprisoned under special detention laws is problem for Govt.”

By late August, the South African Apartheid government was still shooting down protesters with live ammunition. It also connived at encouraging tensions between the inhabitants of Soweto and members of the Zulu tribe, hoping to divide and rule. Prime Min Vorster insisted “that white S Africans ‘have no reason to have guilty conscience about anything’.”

As activists were repressed or saw friends killed, some took up arms and became insurgents. They were sought and sometimes captured and prosecuted under the Sabotage and Terrorism Acts of June 1962 and June 1967.

An account of the guerrilla wing of the African National Congress notes of the impact of Soweto:

“The 1976 uprising, and subsequent massacres and other atrocities by the security forces, gave new impetus to the struggle. Thousands of new recruits flooded into MK, bringing with them a fresh will to fight the enemy, born of their own bitter experience in fighting a brutal enemy only with stones. New vistas opened to intensify the struggle and to hit back in defence of the people . . .

Between 1976 and 1979 there was a marked escalation of armed actions: about 37 armed actions took place between June 1976 and the end of 1978. Railway lines were sabotaged, police stations attacked, and Bantu Administration offices were bombed. The battle was slowly but surely being taken to the enemy, and MK had moved from concentrating purely on sabotage operations to the first stages of guerilla war.”

The total death toll for the Soweto protests is probably 700 with many times that number wounded. Participants later remembered that the white police and troops were “trigger happy– being racists, you know.”

The repressive and trigger happy white minority regime had many resemblances to the current Likud government in Israel. and the same governments that actively supported Apartheid South Frica are supporting the Likud.

One tactic of the Apartheid South African regime was to consign black Africans to Bantustans, territories that were subordinate to Pretoria. In this way their citizenship could be revoked but they did not gain an actual new state. Gaza is very much like a Bantustan of Israel, surrounded by it and kept weak and disrupted. But in this way the nearly 2 million Palestinians displaced there from their original homes in what is now southern Israel can be denied citizenship in Israel while also being kept stateless with regard to their “Palestine” Bantustan.

As in Apartheid South Africa, resistance to the Apartheid policies of Israel is met with extreme violence. In Israel “law and order” is maintained “at all costs” just as in Apartheid South Africa. If it is necessary to shoot down 700 students and youth for refusing to go along with the dictates of old white men, then so be it. The minority government “has nothing to apologize for.” Just as the sabotage and bombings of Umkhonte we Sizwe were termed mere terrorism and the ANC was demonized as a stalking horse for Stalinist dictatorship, so resistance organizations welling up from the slummy conditions imposed on Gaza are demonized and their very resistance to being denied the rights of human beings is used to justify further repression.

No wonder that today’s South Africa is calling on Israel to cease its ground offensive into Gaza.

Bishop Desmond Tutu defended John Kerry’s use of the term “Apartheid” for Israeli policy toward the Palestinians. He said that he saw a situation in Israel/Palestine that exactly mirrored the forms of discrimination, the pass system, etc., that characterized South Africa.

This is the reason that those who think restoration of the status quo ante is sufficient to end the fighting are fooling themselves. There is only one thing that could bring lasting peace — an end to Apartheid.