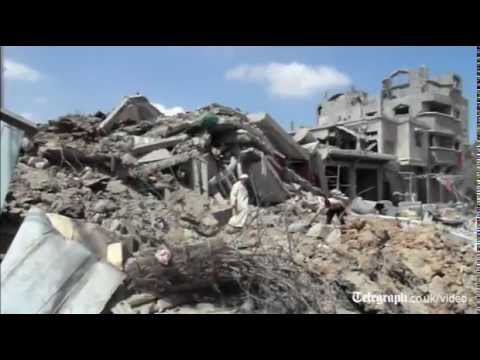 When ordinary countries fight wars they have war aims. In World War II, the US wanted to defeat Germany militarily, but then to help it return to democracy and to economic health. By 1947 the US would actually be spending a lot of money on Germany’s well-being via the Marshall Plan.

Israel has no strategic war aims in Gaza because it has no large scale, long term strategy concerning the Strip. Its war is all about tactics and minutiae. How many tunnels and rockets can it destroy? How much damage can it inflict on the Hamas leadership? But tunnels and rockets can be rebuilt and the dead leaders’ cousins will take over after them.

It is frankly stupid to think the Israelis can, in Mitt Romney’s words, kick the can down the road forever on making peace with the Palestinians. It hasn’t tried because Israel wants Palestinian land and resources and won’t give them up.

The United Nations has raised the specter that because of the Israeli blockade and the consequent inability of Palestinians in Gaza to build their infrastructure, it may well not be habitable by 2020. Its only native source of water, an aquifer, is 90% polluted. If Gaza fails, where will its by-then 2 million people go? Will Israel just let them thirst to death? Renal failure typically sets in in about 3 days if people don’t have water. That is genocide. Israel gives no evidence of doing any planning to avert that outcome in a territory for which it is responsible in international law.

The one strategy Israel has is to use collective punishment and a blockade on children and other non-combatants in an attempt to weaken Hamas. But even if they could succeed (so far they haven’t), the Israelis don’t seem to realize that the hellhole that is Gaza will always throw up radical groups intent on breaking the 1.7 million Palestinians there out of their large open-air jail, in which Israel is keeping them.

That is, Israel’s only real strategy is causing war, not ending war.

Gaza is not a country, that Israel can be at war with it. It is a tiny strip of land surrounded by Israel from land, sea and air, which is kept from exporting its made goods for the most part, faces severe restrictions on imports, and therefore has had imposed on it a 40% or so unemployment rate. Some 56% of Palestinians in Gaza are food insecure. Gaza is recognized by the international community as an occupied territory, with Israel being the occupying power. If being occupied by Israel were so great, by the way, why is Gaza so badly off?

Hamas keeps rejecting any ceasefire that does not include a provision for the lifting of the siege of the civilian population.

I heard the French foreign minister, Laurent Fabius, speaking after the meeting of diplomats in Paris, and he spoke about a settlement that allowed for the social and economic development of the Palestinians.

What a joke! France is has done nothing practical to end the blockade or allow Palestinians to develop.

So a cease-fire that does not include an end to the blockade on Gaza by Israel is not a cease-fire, it is a pause in the war.

The Telegraph: “Gaza residents return to scenes of total destruction”