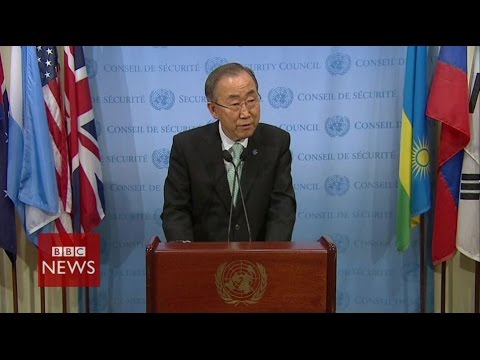 The United Nations Security Council is theoretically a sort of sovereign in international law. If it designates a regime like that of Gaddafi in Libya as a threat to international peace, it can deputize the nations of the world to remove it. One major exception to UNSC authority is Israel, which routinely thumbs its nose at the world body while suffering no sanctions or other punishment.

Defying the UNSC can be extremely dangerous and costly. It demanded that Iraq dismantle its chemical, biological and nuclear weapons programs and destroy any stockpiles of such unconventional weapons, in a series of resolutions after the Gulf War. The Bush administration alleged that Iraq’s President Saddam Hussein had declined completely to destroy those stockpiles and so was in violation of international law, and therefore claimed a sort of indirect sanction from the UNSC to invade and occupy Iraq in order to finish the job. (Unfortunately for Bush, the Baath regime in Iraq had in fact destroyed the stockpiles; this had not stopped Bush propagandists from continuing to this day to cite Saddam Hussein’s alleged defiance of the UNSC as a justification for the US war on Iraq.) Saddam Hussein was hanged in December 2006.

The UNSC demanded a decade or so ago that Iran mothball its civilian, peaceful nuclear enrichment program, aimed at gaining the capacity to fuel nuclear reactors to produce electricity. Iran refused, citing the pledge in the Nuclear Non-Proliferation Treaty that guarantees all countries the right to close the fuel cycle. (Note that Israel went for broke to develop a nuclear warhead, of which it has several hundred, and never suffered any sanctions at all.)

As a result of the UNSC resolutions against Iran, the Obama administration was emboldened to impose a financial boycott on Iran, having it kicked off all the major banking exchanges and making it difficult or impossible for Iran to get paid for its petroleum. Then the US went around strong-arming countries like South Korea in a bid to force them to stop importing Iranian petroleum. A simple US congressional resolution would probably not have given the US the legitimacy to pursue this financial blockade against Iran, but the UNSC resolutions were much more persuasive, combined with US threats to sanction companies that traded with Iran.

UNSC resolutions against the North Korean nuclear weapons program (a kind of military program Iran does not even have) imposed an arms embargo and even permitted other countries to board North Korean vessels at will on the high seas if they suspected that weapons were aboard– a severe attack on the country’s national sovereignty.

So when the UNSC calls on Israel and on Hamas in Gaza to institute an immediate ceasefire, and they refuse, they will attract sanctions, right? These demands, everyone knows, would be full-fledged resolutions if they weren’t watered down by the US. (And let us face it, Israel is the one with the firepower here; it has killed over a thousand in this round of fighting, 80% of them non-combatants; Hamas has killed four dozen or so Israelis, all but three soldiers). I mean, Saddam Hussein was hanged merely for being falsely accused of violating UNSC resolutions! And what if, as with Prime Minister Binyamin Netanyahu, Israel not only refuses the demand for an immediate ceasefire but actually accuses the world’s major powers of being accomplices to terrorism? Doesn’t that sound a little bit like Iran’s Ayatollah Ali Khamenei speaking of “global arrogance”?

Wouldn’t the UNSC do something to Netanyahu for sassing them that way? Wouldn’t they devastate the Israeli economy the way they did the Iranian? Wouldn’t they authorize military action to protect civilians in Gaza from Israeli war crimes, as they did in Libya?

President Obama will protect Israel from any accountability by wielding his veto.

And that is one of the reasons for the mess in the Mideast. The Israeli leadership is completely fearless because it knows that the US will protect it no matter what it does, up to and including calling high American officials terrorist sympathizers.

The truth is that Mr. Obama could end the madness fairly easily. He could just abstain when the UNSC votes sanctions on Israel for its violations of international law.

The European Union has forwarded the Israeli-Palestinian conflict to the US, as an American sphere of influence. The US congress and government more generally, in turn, has been bought and paid for by the Israel lobbies, including the “Christian Zionists.” Unless and until counter-lobbies are formed that effectively contest with AIPAC for influence over US representatives, the problems in the Mideast are unsolvable.