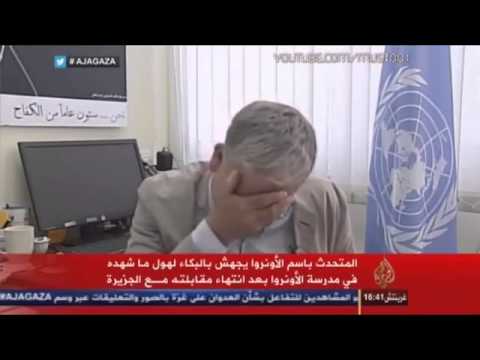 ‘After a United Nations-run school sheltering more than 3,000 Palestinians was shelled early Wednesday, UN official Chris Gunness could not contain his grief while on camera with Al Jazeera Arabic.

“The rights of Palestinians, and even their children, are wholesale denied… and its appalling,” Gunness, spokesman for the UN agency for Palestinian refugees (UNRWA), told Al Jazeera Arabic from Jerusalem. The interviewer appears to thank him for appearing, upon which Gunness breaks down and weeps.

Gaza’s Ministry of Health said at least 17 people were killed and 90 wounded by the school shelling. An Israeli military spokesman told the New York Times that Israeli troops did not target UN facilities, but did respond to Palestinian militant fire from nearby the school in Jabaliya refugee camp.

The White House and the United Nations Secretary General separately condemned the attack. In an official statement Wednesday, the UNRWA Commissioner-General Pierre Kranhenbuhl wrote: “Children killed in their sleep; this is an affront to all of us, a source of universal shame. Today the world stands disgraced.” ‘

The National has more.

UNRWA is overwhelmed in #Gaza we have reached breaking point, our staff are being killed our shelters overflowing. Where will it end? RT

Tens of thousands may soon be stranded in the streets of Gaza, without food, water and shelter if attacks on these areas continue RT