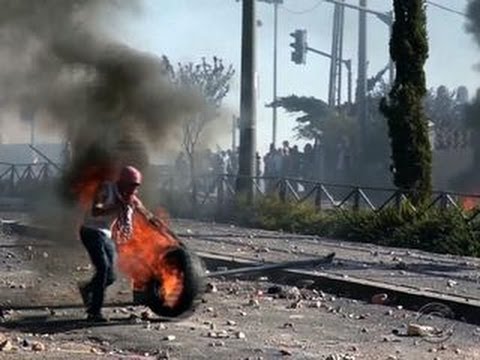 The destruction of tram stations during the protests in East Jerusalem is much more than vandalism, it shows that Palestinians are not quietly acquiescing to the ‘unification’ of the city, which they understand as the annexation of occupied land.

The clashes between Palestinian youth and Israeli security forces in East Jerusalem triggered by the killing of 16-year-old Mohammad Abu Khdeir, who was buried yesterday, were explosive in a way that the city hasn’t seen in years. The murdered boy was a member of one of the biggest families in Shuafat, a relatively affluent neighbourhood on the northern outskirts of Jerusalem. Since the murder, assumed to have been carried out as a reprisal for the killing of three teenage settlers in the West Bank, residents of this usually quiet area have taken to the streets in anger, and protests have spread across the city and beyond.With over 178 protestors were injured in Shuafat alone, according to the Palestinian Red Crescent.

Apart from throwing stones, fireworks and Molotov cocktails at the police – who responded with sound bombs, rubber-coated bullets, and live fire – the protesters attacked the three Jerusalem Light Rail stations in Shuafat, the only ones in serving Palestinian areas of Jerusalem. Every conceivable surface of tram shelters and signage has been smashed, ticket machines dismantled, stones pulled out of the newly-laid pavement to use as projectiles, train tracks set on fire. During the third night of clashes, protesters even attempted to cut the tram’s electricity poles.

Tram service to Shuafat and to the stations north of it has been suspended until further notice, and the operator, Citypass, says repairs may take months. The question of why Palestinian Jerusalemites would wreck infrastructure that has ostensibly made their lives more comfortable in recent years is worth posing. The destruction was not mere vandalism carried out in blind rage, but instead a highly symbolic act. Despite nominally representing an improvement of services for the area, to Shuafat’s residents, the tram is closely linked to the Israeli municipality and to the expansion of Jewish settlements on Palestinian land, implicated in the racism that killed Mohammad Abu Khdeir. Residents heard his mother shouting that she hoped the train would never run in Shuafat again, so that settlers – the people assumed to have killed her son – would no longer pass through the neighbourhood.

The tram connects the Jewish settlement of Pisgat Ze’ev in the North of Jerusalem to the centre of the city and passes through Shuafat on the way. During the early planning stages of the tram, Palestinians strongly opposed its construction, much of which was carried out on occupied land. They argued that it – quite literally – cements the presence of settlements in East Jerusalem, making their presence more permanent and perhaps irreversible.

Like other major infrastructure projects, the tram serves to inextricably tie the East of the city (annexed according to Israeli law, but considered occupied by the international community) to the Israeli West, making a future division or shared capital for Israelis and Palestinians increasingly unlikely – ‘linking Jerusalem with itself’ is what the Israeli Prime Minister calls this approach. Based on this understanding of the role of the tram, an international boycott campaign targeted the two French multinational companies involved in its construction and operation, leading to losses of contracts for both firms, and causing them eventually to pull out of the project entirely.

When the Jerusalem Light Rail began operating three years ago, however, Palestinians appeared to become more pragmatic and made extensive use of the tram, which was often preferable to riding the crowded Palestinian buses prone to getting stuck in traffic rather. People were taking what they could get from a municipality that generally neglects their needs. ‘People couldn’t stop the construction and were already paying taxes to the municipality anyway, so they tried to convince themselves it is a civilised thing to have a tram,’ said Tarek Bakri, a resident of Beit Hanina, who also lived in Shuafat for many years.

Space was often uneasily shared by Jewish Israelis and Palestinians; one Shuafat resident told me, ’it is a narrow, closed space, everyone stares at everyone. As a veiled Palestinian lady I thought that was a risk.’ Tarek said, ‘When my sister called me from the train, she would speak English to me instead of Arabic. She was afraid of what the settlers would do if they knew she was Arab.’

Nonetheless, both regularly used the tram because it was ‘ideal’ for getting to the Old City or to shopping areas of West Jerusalem, which are not served by the Palestinian bus system. Perhaps this first step towards an integration of the Palestinian and Israeli transportation systems really did mean a step towards normality, an improvement of Palestinians’ quality of life, as the municipality’s emphasis on ‘connectivity’ suggested? According to Ha’aretz, at least, ‘Jerusalem’s light rail has become the most salient symbol of the city’s unification under the wings of normalization and technology’.

But not everyone welcomes increased sharing of public space. There are those who aim to defend areas of West Jerusalem now more easily accessible to Palestinians as Jewish spaces. The potential mixing of Arab men and Jewish women appears to be a key concern for right-wing groups – in line with a nationalist and sexist emphasis on the control of female bodies as boundary markers of the nation and a racist discourse alluding to the fear of miscegenation.

Groups such as Lehava have targeted newly shared spaces in Jerusalem with posters and stickers warning Palestinians, in Hebrew and Arabic, to ‘not even think of’ approaching Jewish women. One can easily imagine that the mobs shouting ‘death to Arabs’ and attacking Palestinians in West Jerusalem at random this week were trying to instil fear in order to enforce a similar segregation.

However, these racist groups’ vision of Jerusalem is not one which is ‘separate but equal’, but one in which Palestinian areas are gradually taken over by Jewish settlers. Right-wing Jerusalem councilman Arieh King, a settler, bemoans the ease with which Palestinians apparently navigate and make use of Jewish areas: ‘Why do they [Arabs] feel so comfortable to go wherever they want, and we don’t feel so comfortable going where we want?’

Shuafat was also once off-limits to Jewish Israelis, like much of Palestinian East Jerusalem. Hamdi, a longtime Shuafat resident, recalled: ‘Israelis used to be afraid to even drive down our main road. Jewish taxi drivers wouldn’t take you here. Once, I ordered a new fridge and the company refused to deliver it to our address. They said I could pick it up from French Hill [a neighbouring settlement].’ The tram has served to ease some settlers’ apprehensions about entering parts of East Jerusalem.

The tram stop and the infrastructure associated with it look like those in West Jerusalem: clean platforms are lined by newly-planted trees and lit by modern street lights. There are large advertisements in Hebrew, and private security contractors are always present on the platform. While the surroundings may still feel alien to a visitor from the Jewish areas of town, the tram feels familiar – perhaps this is why Jewish-israeli joggers passing through Shuafat keep to the train tracks, rather than running on the sidewalk.

By demarcating this space as ‘Israeli’, the tram has made the Palestinian areas it passes through known and navigable to Israelis. Hamdi noted: ‘Now settlers from [nearby settlements of] Neve Yacov and Pisgat Ze’ev come here just to park their cars without having to pay for a parking meter, and get on the tram here. They feel safe because now they know the area from riding through it everyday, and because of the armed Israeli security guards that are always standing on the platform.’

But the tram has brought more than a visual upgrade of Shuafat and a reduction of stereotypes towards Palestinian areas; it has also brought in violence, Hamdi says: ‘On Saturdays, armed settlers regularly come and puncture the tyres of our cars, or spray-paint slogans against Arabs onto them. People from the neighbourhood tried to chase them away, but next time they returned, they were armed, so no one did anything.’

Barricades by as-Sahel station. Tickets from the demolished ticket machine can be seen in the foreground. Courtesy of author.

Sparked by the outrage over the brutal killing of a teenager, Palestinian resistance to settler violence and to municipal policies has re-emerged in the past days. The destruction of the East Jerusalem stations of the tram shows that Palestinians are not in fact quietly acquiescing to the ‘unification’ of the city, which they understand as the annexation of occupied land.

Although initially, the tram succeeded in painting a picture of a functioning, integrated city, Palestinians are not convinced by such cosmetic improvements, which have done little to address underlying inequalities, and in fact, mask them. Tarek Bakri told me, ‘With the tram, Israel wants to give the impression that “we’re living together happily”, but the whole system is just based on racism. After the 2nd of June, something changed. We realised what the tram was trying to do is just fake, we don’t want this kind of civilisation.’

Just this past Sunday, the Israeli cabinet approved a plan for the ‘development’ of East Jerusalem, which has the stated aim of preventing a potential division of the city under a future peace treaty. Today it seems it will be difficult to get Palestinians to buy into the notion of an Israeli-controlled East Jerusalem. Amir Cheshin, senior adviser on Arab Affairs for Jerusalem’s long-time mayor Teddy Kollek, said about the ongoing clashes, ‘In these moments you can see that Jerusalem still remains a divided city.’

Hamdi, who witnessed the destruction of the tram stops on Wednesday night, said, ‘I am glad they destroyed the train stops, if it means a more inconvenient commute for the people living in the settlements.’ The young woman from Shuafat said while she personally opposed the destruction of the tram stops, she ‘cannot blame the angry Palestinians since this was installed by the Israeli municipality, who usually follows a discriminatory policy against the Palestinians in the city.’ She concluded, ‘They simply attacked whatever represented the occupation to them.’

The destruction of the tram stops in Shuafat reflects the protesters’ understanding of the fact that, in a city as contested as in Jerusalem, infrastructure is never neutral, and rarely ever innocent. ‘The light rail,’ Tarek said, ‘is heavy for Jerusalemites.’

Hanna Baumann is a PhD candidate at the Centre for Urban Conflicts Research at the University of Cambridge whose research focuses on mobility in and around East Jerusalem.