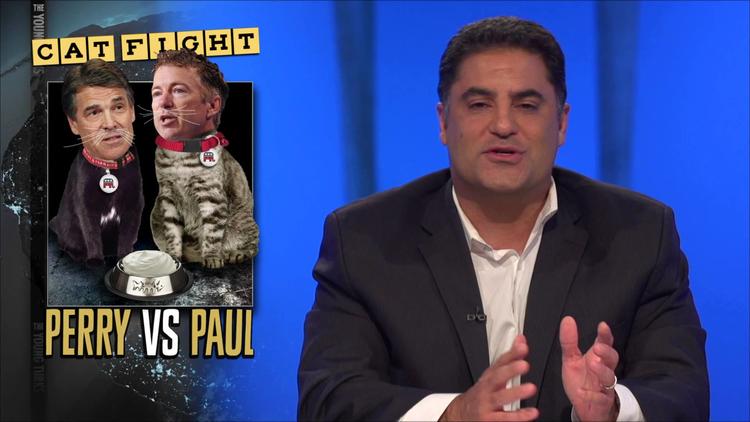 Texas Gov. Rick Perry, apparently considering another run for president (assuming he can remember to do it), attacked Rand Paul as an “isolationist,” calling him “blind” to the danger of international “terrorism” and pointing especially to the rise of the so-called Islamic State in northern Iraq.

Perry said, “”That’s why it’s disheartening to hear fellow Republicans, such as Sen. Rand Paul (Ky.) suggest that our nation should ignore what’s happening in Iraq…” Perry says that the European Muslims fighting with IS could come to the US easily for the purposes of terrorism. But it seems obvious that the US military can’t stop that in any case. If the problem is lax security, it is a Department of Homeland Security issue, not one of foreign military intervention.

The problems with Perry’s use of IS as a plot device for driving US military intervention abroad are manifold:

1. There were no al-Qaeda offshoots operating freely in Iraq in 2002, despite what Dick Cheney and other Bush administration officials alleged. Far from forestalling a dire threat to the US, the Bush administration illegally invaded and occupied a country that had not attacked the US. It then destroyed its economy and dissolved its army and cooperated in a vindictive anti-Sunni set of policies on behalf of the Shiite fundamentalists it brough to power. It was precisely the bull in the china shop of US military intervention that paved the way for IS to come to prominence in northern Iraq in the first place! So what makes Perry think that another intervention won’t also boomerang?

2. It is not clear what exactly the US military could do to fight IS in Iraq. They occupied the whole country for about 8 years and weren’t able to root it out. What exactly would Mr. Perry have them do? As for a US advisory mission to the Iraqi military, it is unclear how advice will do much good when 30,000 troops drop their weapons and run away. Shall we advise them not to do that?

3. IS has never struck, as a terrorist group, at a target in the US. If it is true, as Perry, suggests, that it struck at Israeli Mossad operatives in Belgium, then that surely is a matter for the Israelis to do something about. The Israelis seem willing to deploy the billions of dollars in sophisticated weaponry US taxpayers have given them against women and children in Gaza. Perhaps they could spare some of that weaponry for avenging themselves on the actual fighters of IS. Either the Israelis are a strategic asset for the US, in which case they should be able to fight their own battles, or they are a liability, in which case we shouldn’t give them $3 bn a year and shouldn’t allow them to drag us into military misadventures in the region.

Rand Paul argues that Perry’s depiction of him as an isolationist is a caricature, and that in fact he and Perry agree on most of the steps the US should take in Iraq. Paul even generously admits that both of them largely agree with President Obama on these steps: “I support continuing our assistance to the government of Iraq, which include armaments and intelligence. I support using advanced technology to prevent ISIS from becoming a threat.” He also allows that US airstrikes on targets of the so-called Islamic State may be necessary.

Paul says that where he differs with Perry is that he would not send ground troops back into Iraq.

He also suggests that the policy of the US and its allies of trying to train and arm Syrian rebels has backfired, and that many of these US-backed fighters have defected to IS and other al-Qaeda offshoots. That is, interventionist policies in Syria are in part responsible for the Iraq imbroglio.

Paul says, “After a decade of the United States training the Iraq’s military, when confronted by the enemy, the Iraqis dropped their weapons, shed their uniforms and hid. Our soldiers’ hard work and sacrifice should be worth more than that. Our military is too good for that.”

He argues that there is no way a US military boots-on-the-ground mission could succeed under such circumstances.

Since, rather tyrannically, Americans have been forced into a two-party system, we don’t actually have much choice in politics.

So it matters quite a lot who is the standard-bearer for each of the two parties. On foreign policy, the Rand wing of the GOP could find some common ground with independents and Democrats on issues such as avoiding committing big military land forces abroad.

Unfortunately for the country, all the other GOP early frontrunners are talking boots on the ground overseas, and that means we have a 50/50 chance of such a catastrophe in only 3 years. Worse, some of the potential Democratic frontrunners probably agree more with Rick Perry than they do with Rand Paul. So American elections have become a crap shoot in which the country could lose it all with each election.

Rand Paul makes more sense in this exchange on Iraq and Syria than does Rick Perry, who argues by the same fearmongering about “terrorists” that caused all the trouble in the first place.

The Young Turks: “Perry vs Paul In Snarling CatFight – Is Romney The Savior?”