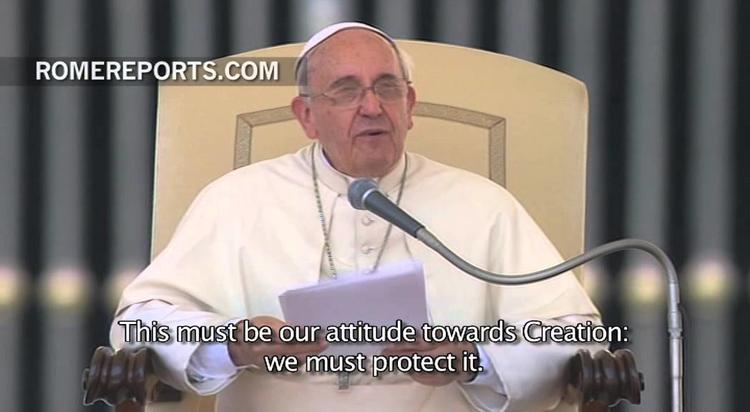 Pope Francis is putting a smile on environmentalists’ faces again. In an address at the University of Molise on Saturday, an agricultural and industrial region in southern Italy, Pope Francis called for more respect for nature, branding the destruction of South America’s rain forests and other forms of environmental exploitation a sin of modern times.

“This is one of the greatest challenges of our time: to convert ourselves to a type of development that knows how to respect creation,” he told students, struggling farmers, and laid-off workers in a university hall.

In unprepared remarks he said that the Earth should be allowed to give her fruits without being exploited. “When I look at America, also my homeland (South America), so many forests, all cut, that have become land . . . that can longer give life. This is our sin, exploiting the Earth and not allowing her to give us what she has within her,” he said.

This isn’t the first time the Pope has called environmental exploitation a sin. Back in May he made similar remarks before a crowd in Rome. “But when we exploit Creation we destroy the sign of God’s love for us, in destroying Creation we are saying to God: ‘I don’t like it! This is not good!’ ‘So what do you like?’ ‘I like myself!’ – Here, this is sin! Do you see?” The Pope’s remarks called on the listeners to be “Custodians of Creation.”

While Pope Francis should surely be credited with drawing awareness to environmental issues (with regard to deforestation, swaths of forests the size of Panama are lost every year), we at EdenKeeper have questioned whether the pontiff and the Holy See could do more to practice what they preach. The Catholic Church has made no indication that it intends to follow the many religious groups divesting from fossil fuels, even though the Pope received a multi-faith letter from religious groups requesting that the Catholic Church divest earlier this year. And its policies still advocate eating meat — one of the biggest causes of greenhouse gas emissions — and condemn contraceptive and family-planning policies.

Pope Francis has taken the name of Francis of Assisi, the patron saint of ecology, and has repeatedly made it clear that he denounces environmentally harmful practices like fracking and mining. He definitely seems to advocate environmentalism on the surface. But there remains an important — and glaring — difference between the Pope and his namesake. Saint Francis lived the message he advocated, Pope Francis simply advocates.

Like his predecessors, Pope John Paul II and Pope Benedict XVI, Pope Francis has used words to urge environmental protection. But let’s pray that he takes it one step further and turns those words into action.

Robyn Purchia I’m an organic-eating, energy-saving naturalist who composts and tree hugs in her spare time. I have a background in environmental law, lobbying, and field work. I believe in God; however, I do not call myself a Christian or a Jew or a member of any religion. I am merely someone who finds a spiritual connection to all humans and the environment. You can find me on Twitter, Facebook, and Google+.

Rome Reports: “Pope’s Audience: If we destroy nature, nature will destroy us”