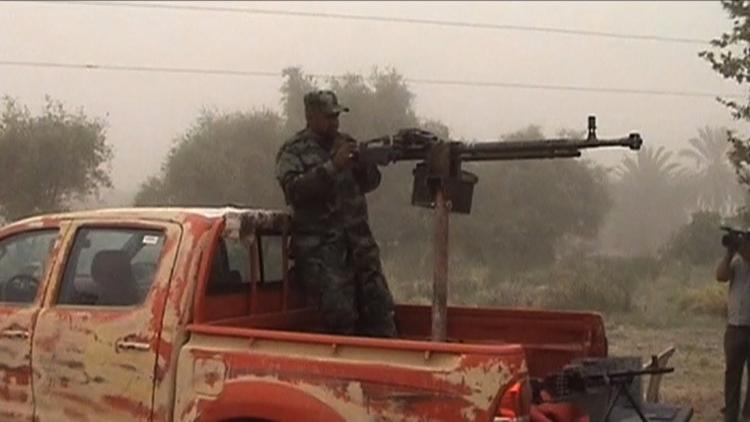 So Muslims of the twenty-first century have a caliph, do they? According to the Islamic State in Iraq and Syria (ISIS), the abolition of the caliphate in 1924 has now been reversed and the institution has been revived after an interregnum of ninety years.

The new caliph is even called Abu Bakr, just like the first leader of the Muslim community who assumed office after the death of the Prophet Muhammad.

This twenty-first century caliph also comes adorned with a self-proclaimed affiliation with the Quraysh, the Prophet’s natal tribe (although his last name, al-Baghdadi, betrays a non-Meccan origin). Moreover, he fights ruthlessly and butchers all those who stand in his way. He gives no quarter to his enemies and there is no satiating his blood-lust – all in the name of jihad.

After all, isn’t that how a Muslim caliph should comport himself?

Yes, indeed, but only if the job description was written by a career Islamophobe, of which there are plenty these days. Now add to the list our current pretender-caliph. Although the likes of Pamela Geller and Frank Gaffney have done plenty to besmirch the image of Muslims and all their cherished historical shibboleths (umma, jihad and yes, the caliphate), no one could have done a better hatchet job than al-Baghdadi.

What would happen if we wrote the job description for the caliphate based on history instead? Here goes.

The original Arabic sources which discuss the qualifications of the individual best suited for the office of the caliph emphasize the following traits: generosity, truthfulness, courage and, most importantly, superior knowledge, both religious and worldly. Abu Bakr, the first historical caliph, had these traits in abundance, as did the three remaining caliphs who are collectively called “the Rightly-Guided Caliphs.” The first caliph’s epithet was al-Siddiq, the “Truthful” which he earned on account of his unflinching honesty and devotion to the truth.

And how was Abu Bakr al-Siddiq proclaimed caliph? As the sources inform us, a crowd of Muslims gathered in Medina to discuss the selection of a successor to the Prophet immediately after his death. They debated the respective qualifications of the two primary candidates for the office of the caliph – Abu Bakr and ‘Ali, the Prophet’s cousin. The 60-plus year old Abu Bakr won out over the roughly thirty-three year old ‘Ali mainly on account of his greater maturity and the greater wisdom that came with it, for they were otherwise equally generous, truthful and courageous.

This process of consultative decision-making, known as shura in Arabic, is prescribed in the Qur’an and was practiced abundantly by the Prophet himself. Following this consultative process, the crowd offered their allegiance to Abu Bakr – another important act known in Arabic as bay’a, which confers legitimacy on the leader. In subsequent political and communal decisions made by the Rightly-Guided caliphs, these twin concepts of consultation (shura) and the offering of public allegiance (bay’a) by the people became enshrined as foundational principles for the legitimate governance of the Muslim community.

Upon his election, Abu Bakr al-Siddiq made it clear that he remained accountable to the people in a speech that has surely become one of the most famous in the annals of Islamic history. According to the well-known author from the ninth century al-Jahiz, Abu Bakr addressed the crowd thus: “Indeed I am a follower, not an innovator; if I perform well, then help me, and if I should deviate, correct me.”

Abu Bakr then went on to assert that the caliphate was deserved only on the basis of moral excellence; kinship to the Prophet or tribal affiliation (such as descent from the Quraysh tribe) was of no consequence whatsoever. His address has justly become a model of humility and moral accountability to the people that is meant to set a gold standard for political conduct in the Islamic milieu.

Fast forward to fourteen centuries later and let us compare the historical situation of the seventh century with the contemporary one. There is no doubt that al-Baghdadi did a bit of homework before anointing himself caliph. In a sermon he gave at the Grand Mosque in Mosul, Iraq on Friday, 4 July (the sixth of Ramadan), he cited part of Abu Bakr al-Siddiq’s speech. He repeated the section about asking the people to correct him if he should go astray but, significantly, left out the part about the caliph being “a follower, not an innovator.” He also failed to mention that the people had a very important role in electing their caliph and that they had the right to be consulted in such matters before his appointment. Instead al-Baghdadi proclaimed thunderously that “I have been appointed [caliph] over you, even though I am not the best and the most morally excellent among you.”

With this last assertion, he brought the whole edifice of the Sunni caliphate crashing down over him, by mocking the very ideals that are supposed to shore it up. As history tells us, the caliph, also known as the Commander of the Faithful (a title dutifully adopted by al-Baghdadi), is expected to be consensually elected by the people or by their representatives (as in an electoral council) and he must be acknowledged to be the most morally excellent of his time. This is the documented Sunni position with regard to a legitimate caliphate, even as history took a different turn and dynastic rule set in.

So when al-Baghdadi confessed that “I have been appointed over you,” he spectacularly thumbed his nose at the principles of consultation and public allegiance that undergird the earliest legitimate caliphate.

That means he is one of two other kinds of rulers who emerged in history who do not depend on shura and bay’a for their legitimacy. The first would be a mere worldly king, who simply wants the trappings of political power and rules absolutely and tyrannically over his subjects. Such a king is designated in Arabic as malik, a pejorative term which immediately brands the individual as an illegitimate usurper of political power, for he rules his people without their consent. The Umayyad rulers who came to power after the “Rightly-Guided” caliphate in the late seventh century without instituting any process of election were therefore contemptuously dismissed as mere “kings” by official historians, despite their conscious adoption of the title of caliph.

The second possibility is that al-Baghdadi considers himself appointed by God, a status that no Sunni caliph could ever openly entertain. From the viewpoint of Sunni political theory, such a claim would make him the equivalent of a Shi’i imam or religious leader. In contrast to the Sunnis, the Shi’a did come to believe in the divine appointment of their leaders which, by definition, was not subject to the processes of consultation and ratification by the people. It is very likely that this is the model al-Baghadi is emulating. Given ISIS’s loathing for the Shi’a, such an assertion is richly ironical and confirms the old adage that a little learning is always a dangerous thing!

Most Muslims have received al-Baghdadi’s proclamation – when they are aware of it – with supreme apathy. This should come as no surprise. Al-Baghdadi can keep touting himself as the new caliph, but most Muslims know enough about their own history to recognize him for what he is – a murderous tyrant using religion as a cheap armour to acquire rank political power.

Kingly pretensions were never part of the real caliph Abu Bakr al-Siddiq’s image. The current indifference and revulsion of the majority of Muslims towards the pretender-caliph speaks to their resolve not to take part in the degradation of that image and to keep the hope alive that political governance in their societies will continue to be based on consultation and the consent of the people. These principles constitute the true legacy of the historical caliphate and can easily translate into modern democratic systems – a point that a number of Muslims are now energetically making.

Asma Afsaruddin is Professor of Islamic Studies and Chairperson of the Department of Near Eastern Languages and Cultures at Indiana University, Bloomington. She is the author of several books, including Excellence and Precedence: Medieval Islamic Discourse on Legitimate Leadership, The First Muslims: History and Memory, and the recently published Striving in the Path of God: Jihad and Martyrdom in Islamic Thought.