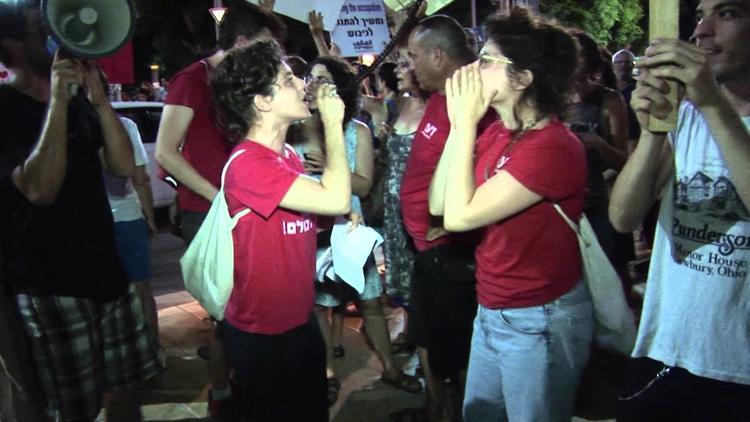 A New Yorker cartoon of a few years back shows Moses and the Israelites crossing the Red Sea. Looking at Moses, one Israelite says to the other, “Well, he’s alright, but I wish he were a little more pro-Israel.”

The leadership of American Jewish community organizations never has to worry about such criticism. For the officials of the self-described “major” American Jewish groups, “strong on Israel” is the first qualification of leadership, and “pro-Israel” means one thing: justifying and defending all actions of the Israeli government. And for the ADL and other leadership organizations, Palestinian hostility to Israel can only be explained by “incitement” and “race hatred.” In their view, the Israelis are so benevolent to the people who live under their rule that no other explanation is possible.

Even the dreaded word “occupation” must be put in scare quotes to render it kosher for an ADL announcement. Last week the ADL’s Abe Foxman wrote about that animosity: “Some justify this animosity, saying it is a natural result of the Israeli-Palestinian conflict, and of Israel’s ‘occupation’ of the West Bank.”

American Jewish critics of Israel are deemed dangerous, but criticism by Israeli Jews is the most feared and resented type, and the establishment Jewish organizations have worked hard for decades to keep such voices out of the American marketplace of ideas. But in the internet age that is increasingly difficult. A few weeks ago Israeli novelist and public intellectual Amos Oz dubbed the violent extremists among the West Bank Settlers as “Hebrew Neo-Nazis.” The outcry in the U.S. was quite loud. But wait—are there violent extremists among Israel’s Jews? According to those American Jews who describe themselves as pro-Israel, the Settlers, like all other Israeli Jews, are by definition victims, not victimizers. And if the Settlers get a little rowdy, it is only in reaction to the provocation of their “irrational” neighbors.

In the last decades of the 20th century there were Jewish intellectuals who could criticize Israel and still remain within the communal consensus. The late Rabbi Arthur Hertzberg, who died in 2006, was one. Immediately after the 1967 War, Hertzberg—rabbi, historian, and author of The Zionist Idea—called for the creation of a Palestinian state alongside Israel, a position that was an anathema to the Israeli government and to most American Jews. Decades later Hertzberg recounted with pride and pleasure his public battles with Israeli officials, including Prime Ministers Golda Meir and Menachem Begin, over their policies toward the Palestinians.

I was largely in opposition to the dominant policies. I found myself restating this view year by year, as repeated attempts were made to silence me in Jerusalem and by its lackeys in New York and Washington. I insisted that we in the Diaspora could represent the best interest of the Jews worldwide—never mind the political and moral foolishness that governments in power might be proclaiming … I also had no fear that I was committing treason by denouncing what I knew was wrong and foolish, and I laughed off the label “maverick.”

But Hertzberg the dissident rabbi is an artifact of the past. Today there are no dissidents on Israel inside the major Jewish organizations; they have either resigned or been purged. By the mid-1970s, being “strong” on Israel and “tough on the Palestinians” were at the core of American Jewish identity. Identification with Israel (often expressed in emotional terms as “love for Israel”) replaced Judaism rather than augmented it.

From the late 1960s until today, much informed criticism of Israel’s occupation of the territories conquered in the 1967 War has appeared in Haaretz, the Israeli newspaper of record. Like the New York Times and its liberal European counterparts, Haaretz stood, and stands, for liberal values in an increasingly reactionary society. And for that reason the paper was regularly condemned by American Jewish leaders. Now it is simply dismissed as “defeatist.” In the mid 1970s, Rabbi Arthur Hertzberg conjectured that “if Haaretz was published in New York City, the local Jewish organizations would burn down the building in which it was published.”

Unlike American Catholics or members of the mainline Protestant denominations, the American Jewish community has no official hierarchy or representative body. The Conference of Major American Jewish Organizations—with fifty constituent members—is an umbrella organization of charities and advocacy groups, not a body that can speak with any sanctioned authority.

Despite this lack of central authority, a “checkbook leadership” has emerged, a leadership shaped by money and political influence, not by piety, sagacity, or scholarship. These leaders are not like Rabbi Hertzberg; they are neither scholars nor dissenters. In fact there is something of an inverse ratio at work here. The more these public figures assert to know about what is “good for the Jews,” the less they know about Judaism the religion, or about the Hebrew or Yiddish languages and Jewish texts. History, language, and religious customs are of no interest to many of them. What is of central importance is their “love and support” of Israel, a country they know little about, though many of the leaders have visited it many times.

One example: In 1992, when Black-Jewish relations were at a low point after the Crown Heights riots, the Jewish Community Relations Council of New York City invited former president Aristide of Haiti to address the council. Aristide, who had been deposed in an American-sponsored coup a year earlier, is a Catholic Priest whose graduate work in philosophy was done at the Hebrew University of Jerusalem. Aristide addressed his Jewish hosts in flawless Hebrew. When his speech was over the head of the council had to apologize to Aristide, for virtually none of the assembled understood what he said. Knowledge of Hebrew was not one of their qualifications for leadership.

But despite their ignorance of Israeli language, culture, and history these “leaders” claim to know what is best for Israel’s interests and claim to represent American Jews on the very complex issue of Israel and its relationship with the Palestinians. And curiously, their often belligerent rhetoric about what is best for the Jewish state often clashes with what Israeli experts think and say. “Strong on Israel” does not seem to mean acting with wisdom, intelligence, or discernment, but being “tough”—jingoistic in tone and militaristic in tone.

And to celebrate their militarism, scores of Israeli military officers are invited each year to make appearance at synagogues throughout the U.S. Many a Yom Kippur service is “blessed” by a high-ranking officer who assures the assembled that “Israel is strong.” I have witnessed, reluctantly, some of these blessings and can testify to the near ecstasy that the presence of an Israeli general generates. After blessing the congregation the general exits the building. Religious services, it seems, are for those foolish enough to believe in the power of the spirit and not in the power of the sword.

McCarthyism (“the practice of making unfair allegations in order to restrict dissent”) is the ideal tool for quashing dissent on Israel. Its methods—including fear mongering and intimidation—are “made in America.” And in their time—until McCarthy was faced down by Joseph Welch, general counsel for the army, in 1954—these methods were very effective in silencing progressive voices in politics, the academy, and the performing arts.

This dangerous mix of ignorance and militarism was again in evidence last month when the ADL pressured the Metropolitan Opera to stop the simulcast of John Adam’s opera “The Death of Klinghofer.” The Metropolitan Opera production was threatened with protests and a boycott by “pro-Israel” groups. That was a high-culture case of intimidation. There have been many cases of popular culture intimidation. Just few weeks earlier the rock and roll group The Shondes (their name means “disgraces” in Yiddish) were banned from the Washington D.C. Jewish Community Center because they were outspoken in their opposition to the Israeli occupation. And in the realm of politics: weeks before The Shondes were banned, the Conference of Presidents of American Jewish Organizations denied the application of J Street (a “pro-peace/pro-Israel” lobbying group that supports the Two-State solution) to join the Conference.

Is this fear of criticism, especially Jewish criticism, a new phenomenon? By no means. It has been evident within the Conference leadership for decades. But as principled opposition to Israeli policy increases, McCarthyite methods are now being used on a large scale and more frequently. As a prominent rabbi told me over a decade ago, “In next week’s sermon I could question God’s actions in today’s world and no one would bat an eyelash. If I were to question the State of Israel’s actions I might not get out of the synagogue alive. At the very least I would lose my pulpit.” My conversation partner was a Conservative rabbi, but he could just as well have been a Reform or Modern Orthodox rabbi.

Along with other dissidents, I too have felt the lash of American Jewish “defenders of Israel” on many occasions. Among the more absurd of these attacks: In the late 1980s, I was invited to lecture at the “Festival of Faiths” in Louisville, Kentucky, an annual event run by the Center for Interfaith Relations. The topic was to be the Dead Sea Scrolls, a subject I taught in my courses at Dartmouth College. A week before the festival I received a panicked call from the director of the festival. He was embarrassed to say that he had been pressured to disinvite me. When I asked why, he said that he had been informed by a prominent Louisville citizen that I was “an enemy of the Jewish people.” My signature on an open letter to Prime Minister Ariel Sharon calling for a change in Israeli policies toward the Palestinians had, it seemed, rendered me unfit to speak about the Dead Sea Scrolls and their relationship to Jewish and Christian history.

Since then, I, like many of my colleagues (especially those of us with Hebrew names and a deep personal knowledge of Israel) have been subjected to insults, boycotts, and hostility from more “loyal” Jewish colleagues and from activist students who are busy “defending Israel” from afar.

Any teaching about Israel that is not celebratory is rare indeed. So rare that it makes headlines because the mainstream Jewish organizations try to suppress it. In those elite American universities where there is a program in Israel Studies, the courses are advocacy courses, not courses worthy of great colleges and universities. And they are very well funded by wealthy foundations.

But according to the ADL and other American Jewish organizations, American campuses are riddled with anti-Semites masquerading as critics of Israel. Many academic critics of Israel have been denied tenure, fired, or simply never hired, and an atmosphere of fear and anxiety pervades the halls and offices of departments that dare to offer an objective course about Israel and the Palestinians. At Columbia University the cases of Joseph Massad and Nadia Abu El-Haj are illustrative (the university administration backed these professors despite massive campaigns against them), as was the firing of Joel Kovel at Bard College and Marc Ellis at Baylor University. Alan Dershowitz’s successful campaign in 2007 to pressure DePaul University to deny tenure to Norman Finkelstein is bitterly remembered by all whose courses about the Middle East are not prep courses for Birthright—the program that takes Jewish college students to Israel for a ten-day “infomercial” about one of the world’s most complex issues. And the campaign against University of Michigan Middle East historian Juan Cole, whose 2006 appointment to a professorship in Yale’s history department was blocked because of his “anti-Israel” writings, was a reminder that academicians, including the most senior and distinguished scholars, write and teach critically about Israel at their peril.