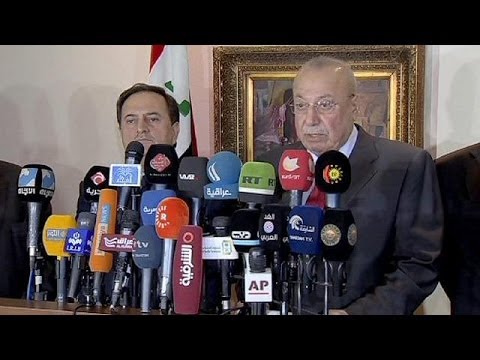 1. Last Wednesday Prime Minister Nouri al-Maliki angrily lashed out at the Kurds, accusing them of harboring the terrorists of the so-called ‘Islamic State.’ Since the Kurds have in fact fought the IS radicals, al-Maliki’s charge is hard to take seriously. Rather, it appears to be a sign of how angry he is that Kurdistan president Massoud Barzani is pressuring him to step down. I don’t think al-Maliki can get a third term without Kurdish support.

2. Barzani responded that al-Maliki is “hysterical.” The Kurds then withdrew from al-Maliki’s cabinet, in which they had been his coalition partners. The ministries will likely go on running all right, but the move is symbolic of the break between al-Maliki and his erstwhile backers. Foreign Minister Hoshyar Zebari, one of those who suspended participation, says it will be hard for the Kurds to work with al-Maliki unless he apologizes.

3. On Friday, the Kurds seized two important oil fields in the Kirkuk region. Since their willingness to supply Turkey with petroleum seems to be one of the reasons Ankara has increasingly made its peace with Iraqi Kurdistan becoming independent, the Kurds are now in a position to remunerate Turkey even more generously for acquiescing in their national aspirations.

4. Gunmen in Baghdad attacked two apartment buildings in the upscale Zayouna neighborhood and killed some 29 women. It was apparently the work of Shiite militiamen (the hard line Mahdi Army is being revived to fight the Sunni ‘Islamic State.’) It has been years since this sort of attack has occurred in the capital. The rival puritanisms of the Sunnis and the Shiites may be ramping up.

5. The Iraqi air force brought 4,000 Shiite volunteers from the holy shrine city of Karbala up to largely Sunni Arab Ramadi, west of Baghdad. They are intended to fight the Sunnis who threw off Iraqi government rule early this year. The Sunnis of Ramadi have been dominated since last January by the so-called Islamic State. They are upset with al-Maliki’s sectarian notions of governance and appear in part to have thrown in with IS to get away from the rule of al-Maliki, which they code as Shiite and even Iranian. Bringing Shiite militiamen to Ramadi is bound to cause a great deal of dissatisfaction in Ramadi.

7. The so-called Islamic State stole some low grade nuclear material from a university in northern Iraq. They can’t do much with it of a practical sort (it cannot be used for a nuclear bomb). But still, it points further to how much the Iraqi state has collapsed.