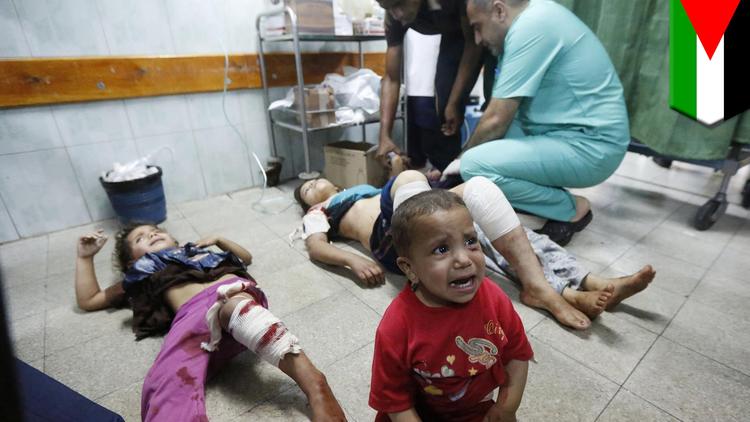 Sharif Abdel Kouddous reports for The Nation from Gaza on the Israeli shelling of a UN school that killed 16 and wounded 200, even though the school’s coordinates had been given to the Israeli military. Despite Israeli water-muddying, there isn’t any doubt that the Israelis struck the school, nor is there any evidence that the school was an origin point for any Hamas rockets. Indeed, correspondents on the ground find no evidence for Hamas using civilians as human shields.

CBS explains that the Israeli military contacted the UN and told them that the compound would be attacked by Israel. The UN replied that they would need time to move the large number of refugees sheltering there. They tried to cooperate. They never heard back from the Israeli army, and then Israeli tanks opened fire. It is outrageous that Israeli media spokesmen attempted to assert or imply that the school was hit by Hamas rockets. They were lying pure and simple. Because the Israeli generals had already told the UN that they were going to shell the school!

I don’t think it is any accident that soon thereafter, Israel announced a unilateral ceasefire for Saturday (though it had already violated the ceasefire by Saturday morning). The images of dead children and of reckless and illegal shelling of civilian structures where there were no militants or munitions have piled up in the World’s consciousness, and even though the Israeli leadership likes to pose as macho, they are open to being pressured, and they are being heavily pressured, by the outside world.

Likewise, the eruption of large demonstrations on the West Bank must be worrisome to the Netanyahu government, since it would stretch the Israeli army thin to try to have it police both Gaza and the whole West Bank. Worse, the West Bank protesters are secular Fateh types, and are more sympathetic figures to the Arab neighbors like Egypt than are Hamas. Cracking down on them won’t be as relatively cost-free as the Israeli campaign against Hamas, which is disliked by the governments of most of Israel’s Arab neighbors or near neighbors. Still, the ceasefire is so far a phony ceasefire, and unless the siege on Gaza is lifted any ceasefire is just a prelude to another war.

The UN school incident is explained by Tomo News: