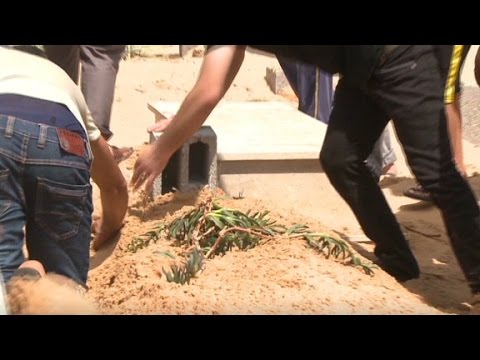 By Nurit Peled-Elhanan, Hebrew University of Jerusalem Via The Conversation

Times are very rough for both Israeli and Palestinian families. The death toll in Gaza currently stands at around 620, 74 of whom are children. The death toll in Israel stands at 30, two of whom were civilians. Three Israeli teenagers were kidnapped and murdered in the West Bank. A Palestinian youth from Jerusalem was burned alive by Jewish extremists.

Dangerous and violent racism against Arab Israeli citizens encouraged by Israeli ministers and parliament members leads to riots in the streets, breeds aggression and severe discrimination against Palestinians, along with a new aggression against peace activists.

Israel is currently suffering from an unprecedented social and economic crisis. The single source for this crisis is Israel’s destructive occupation. The occupation has raised two generations of Palestinians as prisoners jailed between military checkpoints and walls.

The two generations of Israelis who believe that they are the lords of the land are nurtured by the illusion that the oppression of 4.5m Palestinians gives them security and peace, and that such an oppressive society is capable of raising compassionate children. Therefore they are shocked when their boys become ruthless killers, as is revealed by current events.

One of the most dominant and disastrous expressions of the occupation is the settlement project in East Jerusalem and the West Bank, which is illegal under international law. The settlements allow Israel to take control of Palestinians’ natural resources in violation of international law, to strengthen its presence in the territories, and to make the occupation irreversible.

Despite agreements, international resolutions and Israeli promises, the settlements are expanding. All the while, Palestinian homes in East Jerusalem and so-called “Area C” (61% of the West Bank, under full Israeli control) are constantly destroyed.

While water flows in the settlements without limitation, Palestinian villages live under a cruel water regime, as was recently pointed out by the president of the European parliament, Martin Schultz, during a speech he made before the Israeli Parliament. Many roads are closed to Palestinians and the restriction of movement is unbearable.

World must do more

To this day, the international community has not done enough to stop Israeli settlements. European countries have profoundly criticised them while continuing to co-operate fully with Israel, economically, politically and militarily. As a result, Israel does not pay any price for seriously violating international law. On the contrary, Europe also pays for much of the humanitarian damage of the occupation, making it even easier for Israel to maintain.

A year ago, the EU made a small step in the right direction: guidelines were issued prohibiting EU institutions to fund or to finance research organisations and activities in the settlements. Twenty European countries have published formal warnings to their citizens and companies regarding trade and financial relations with the settlements.

And yet, these measures do not seriously challenge Israeli policy in occupied Palestine. Europe could do much better as illustrated by its response to Russia’s annexation of Crimea. It took the EU a few weeks – not years – to make its stance against Russian actions crystal clear. Just this week the EU has taken a further bold step in suspending the funding of new public-sector projects in Russia by the EU’s lending institution, the European Investment Bank.

This is in addition to the previous decision to ban the import of Crimean goods, and to impose targeted sanctions on both Russian and Ukrainian officials and on business firms operating in Crimea. This all occurred, of course, well before the Malaysian jet was shot down just this week.

As an Israeli longing for peace and justice, I believe Europe has to contain the settlement policy with greater determination and more concrete measures.

The world increasingly understands the threat that the settlements pose to peace and stability in the region.

Over time, neither Palestinians nor Israelis can survive without freedom and independence for the Palestinians. Already, the undemocratic character of the state of Israel is increasingly transforming it into an apartheid state.

For the two nations living in this region, there is a joint and real interest in ending the Israeli occupation as a precondition for peace. We, the citizens of Israel and the stateless people of Palestine, cannot bring this about on our own. We need the help of the international community at large and of the EU in particular.

As a laureate of the European Parliament’s Sakharov Prize for Human Rights, and as a mother and a human being, I call on the EU to use all the diplomatic and economic tools at its disposal to help save my country from the abyss of eternal occupation and injustice.