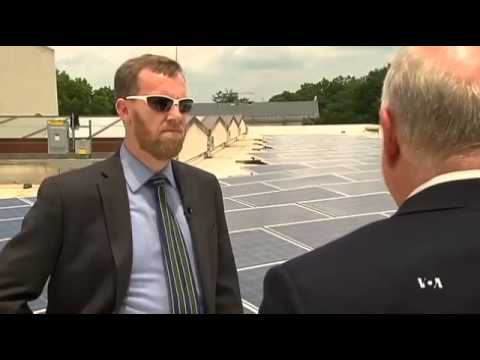 By Christopher DeMorro via CleanTechnica

Though solar power is still far from surpassing coal as America’s primary energy source, the number of people employed by the solar industry has surpassed the number of coal miners. The non-profit Solar Foundation estimates that there are about 142,000 people in the U.S. workforce who spend “at least 50% of their time supporting solar-related activities,” according to Business Insider.

So what does this mean for the future of energy in America? Quite simply put, it highlights how solar power is growing at a rapid pace, with record-breaking 43 GWH estimated to be installed around the world this year, and the U.S. is estimated to make up about 6.6 GWH of those new installations. Other nations, including China and India, are investing even more heavily into solar though, and the race is on to make clean energy a cornerstone of every economy.

Meanwhile, the EPA is putting pressure on coal power plants to either clean up their act, or convert to natural gas power. This has sent coal mining employment plummeting in the past few decades, though the industry maintains a ruthless grip on many politicians on both the local and national level. Also, when you factor in every aspect of coal production and transportation, the fossil fuel industry still dwarfs solar power.

The tide is slowly changing in favor of solar power though, and as more Americans become employed by the solar industry, opposition is likely to decrease while interest is only going to increase. It might be a good time to make some choice investments in the solar industry, as it looks set to only continue to grow.

Christopher DeMorro A writer and gearhead who loves all things automotive, from hybrids to HEMIs, Chris can be found wrenching or writing- or esle, he’s running, because he’s one of those crazy people who gets enjoyment from running insane distances.