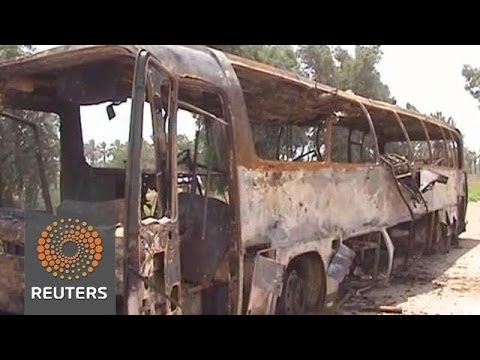 How can a country like Iraq – with its different sects, religions and ethnicities – be governed appropriately? Some are now suggesting that giving all of Iraq’s provinces the powers they were granted by a law amended mid-2013 could be a way out of the current crisis. Local authorities would govern themselves better than Baghdad and Iraq would remain united.

As Iraqi politicians have been trying to form a new government, more than one analyst has said that the country’s current crisis is due to the policies established by the most recent Prime Minister Nouri al-Maliki, and his desire to monopolize and centralize power. Various solutions have been suggested regarding the problem. These have included introducing amendments to the Iraqi Constitution, creating new laws to reign in the Prime Minister’s powers or just simply removing al-Maliki from the job – which may well happen anyway as some of the Shiite Muslim Prime Minister’s most important allies seem to have deserted him.

However there is one other potential solution to at least some of Iraq’s current woes – and that is to properly enact, and then commit to, Law 21, which was amended by the Iraqi Parliament in the middle of 2013.

There are at least 18 Iraqi cities regularly complaining about the monopolization of power by Baghdad. They say the government interferes in provincial affairs far too much, that it makes decisions that actually go against the Iraqi constitution and that it prevents local officials from making good decisions and local appointments.

“Iraq is a country with many ethnicities, sects and religions,” explains local political analyst Saeed Radi. “It’s very difficult for any one party to manage all affairs. A Shiite Muslim-dominated government would be hard pressed to know what Iraq’s Sunni Muslims and Kurds want and need.”

Each province, no matter which sect or ethnicity the majority of its inhabitants are, has different needs. For example, the southern city of Basra suffers from a lack of water and power and it is also home to a large amount of poor people. Its people believe that if Basra had more autonomy then local officials could make better decisions more quickly and solve at least some of the city’s problems. Another example: The northern city of Mosul needs its state officials to be given more power over local security. Part of the reason that the Sunni Muslim extremist group, the Islamic State, currently dominates there is because many locals felt they were a better alternative than the Iraqi army, that had been stationed there and which was mainly made up of Shiite Muslim forces.

However officials in these cities and provinces have been prevented from making many of their own decisions, with the government saying that they cannot make any moves without Baghdad’s prior approval.

Article 122 of the Iraqi Constitution actually gives the provincial councils this power “in accordance with the principle of decentralized administration”, Article 110 limits the federal government’s powers to things like foreign and fiscal policy and Article 115 says that anything that the federal government isn’t responsible for, should be the responsibility of the provincial councils.

But of course the Iraqi government headed by al-Maliki has been ignoring those stipulations. Some would say it is those kinds of tactics that have pushed Iraq closer to splitting, and becoming three different countries: Sunni, Shiite and Kurdish.

“It really began when the federal government refused to apply Law 21, from the summer of 2013,” former judge and legal expert, Wael Abdul-Latif, told NIQASH. “That law would have forced the government to do as the Constitution told it and grant the provinces broader powers.”

The amended version of Law 21 would have seen local governments choosing their own judiciary and their own heads of security. The law also gave them the power to deploy the Iraqi army inside and outside major cities; Baghdad is also obligated to consult with the local governor, should they wish to deploy the army in the province. In fact the amendment, Article 14, says “the governor shall have direct authority over all the apparatuses operating in the province which are tasked with security and with maintaining public order”.

Law 21 would also have given the provinces more control over their own money and would have made some of them a lot richer. Law 21 would increase the percentage of money those provinces producing oil get. Article 44 of the Iraqi Constitution stipulates that, besides part of the federal budget, fees or fines and tax revenues, each province gets a percentage from any barrel of oil that is either produced or refined there; a similar stipulation exists regarding the production of natural gas. And Law 21 increases that amount significantly. For an oil-producing province like Basra with much poverty and lack of other resources like water, this would have been very important.

“Conflicts between the provincial council and the federal government continue,” says Ahmad al-Sulaiti, the Basra council‘s vice-chairman, and a senior cleric from the Islamic Supreme Council of Iraq, another Shiite Muslim party that has allied itself with al-Maliki’s own mostly Shiite Muslim bloc in the past. “The government hasn’t given Basra any more financial powers even though we produce two thirds of Iraq’s oil. This is despite the passage of Law 21 which gave us more powers.”

“The federal government hasn’t given the governor any powers over local security,” complains Ghazwan Hamed al-Daoudi, a representative of the local Shabak people on Ninawa’s provincial council; Mosul is the capital of the province. “For example, the law says that the governor is the one who is supposed to select the police chief here. But the federal government wouldn’t let him. The fall of Mosul to members of [Sunni Muslim extremist group] the Islamic State is partially due to the fact that security in Mosul was run by the Iraqi army, who managed things badly and who didn’t know how to deal with the local people. The provincial council would have done a far better job as they know the local people.”

Prior to the current security crisis in Iraq, the heads of provincial councils from throughout the country had held meetings in December 2013 and then again in February 2014. The first meeting was held in Basra, the second in Baghdad and a third in Mosul. The meetings were supposed to send a message to the Prime Minister about the importance of granting the provincial authorities the powers they were entitled to.

There have been demonstrations in Shiite Muslim majority provinces where protestors demanded better services. There were also demonstrations in the Sunni Muslim-majority areas, where locals wanted more power over their own security and the departure of an Iraqi army they felt was treating them unfairly and harshly.