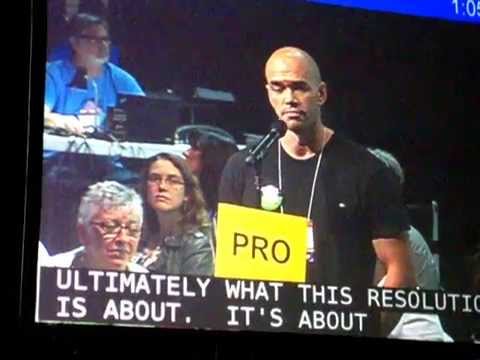 In some good new in the fight against climate change, the Unitarian Universalist Association (UUA) passed a resolution calling for divestment of their $175 UUA Common Endowment Fund from fossil fuel companies at their 2014 General Assembly in Providence, Rhode Island, over the weekend.

“The UUA has a long-standing history of fighting for our environment,” said UUA President Peter Morales. “I am proud that we are going to put our money where our values are on this issue.”

An overwhelming number of the 2,000 delegates present at the meeting voted to approve the resolution. But some did raise concerns about the influence the divestment movement actually has on companies. “Some people said that disinvestment is ineffective because it doesn’t actually affect companies,” Tim Brennan, Chief Treasurer and Chief Financial Officer, told us. “But it’s not about affecting the companies as much as it is about making a strong moral statement.”

Ed Horche of Somerville, New Jersey, was among those at the meeting voting to divest. “This is one tactic in an overall strategy in working against overdependence on fossil fuels,” Horch said. “It’s not going to cause ExxonMobil to go broke, but that’s not what it’s intended to do.”

Allan Shapiro of North Andover, Massachusetts, also voted in favor of divestment. “I think it makes a statement, not so much as an economic issue, but as a philosophical issue,” he said.

Making a Statement and Committing to Advocacy

The resolution was carefully crafted by a committed group of activists known as UU Divest in collaboration with members of the UUA Committee on Social Responsible Investing at the UUA Investment Committee. While requiring UUA to divest from Carbon Tracker 200 companies in five years, it also allows the denomination to retain investments in companies with which it engaged in shareholder actions seeking environmental justice. About 2.9 percent of the UUA’s total endowment is investment in CT200 companies — already an incredibly small amount.

“The two most important things about the resolution is that it makes a strong statement about the denomination’s position on climate change and it is a clear affirmation of our shareholder advocacy work,” Brennan explained to us.

The UUA has pressed corporations its invested in to quit the American Legislative Exchange Council (ALEC), one of the major forces behind the recent push to get states to roll back their renewable energy standards. Because of the UUA, and other faith-based investors, 80 companies have left ALEC, which has substantially weakened the conservative organization. UUA also filed a resolution as an investor of Oasis Energy asking them to reduce their fugitive emissions of methane. In response, Oasis committed to outfitting 90 percent of its wellheads with technology to capture fugitive emissions.

“We think it’s critical for shareholders to be at the table speaking with these companies,” said Brennan. “We stand together with other faith-based investors to stay responsible with climate.”

What Does This All Mean?

As the UUA delegates recognized, the decision to divest is more about making a statement than financially crippling big oil and king coal. But that doesn’t mean that fossil fuel companies shouldn’t and won’t care. The UUA’s divestment in combination with divestment plans from other denominations, organizations, and institutions, such as the Presbyterian Church USA, the Union Theological Seminary, Stanford, and University of Dayton is not just a promise to keep their money away from CT200 companies, but it sends a powerful message to their supporters.

If less people want to own these shares, fossil fuel companies will notice.

Robyn Purchia I’m an organic-eating, energy-saving naturalist who composts and tree hugs in her spare time. I have a background in environmental law, lobbying, and field work. I believe in God; however, I do not call myself a Christian or a Jew or a member of any religion. I am merely someone who finds a spiritual connection to all humans and the environment. You can find me on Twitter, Facebook, and Google+.