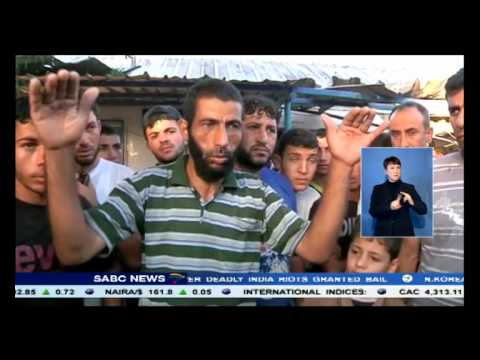 BETHLEHEM (Ma’an) — … [O]n Wednesday, another 16 people were killed when at least two Israeli tank shells slammed into a UN school in Jabaliya refugee camp in the north, in an attack angrily denounced by the UN chief and the world body’s agency for Palestinian refugees.

The attack was also denounced by the White House in a carefully-worded statement which avoided mentioning Israel.

“The United States condemns the shelling of a UNRWA school in Gaza, which reportedly killed and injured innocent Palestinians, including children, and UN humanitarian workers,” a statement said.

“They’re bombing houses, homes, schools — there’s no protection,” said Moin al-Athamna, one of those who had been staying at the school when the attack occurred.

Inside one classroom, two young men wearing Palestinian boy scout scarves were engaged in the grisly task of collecting body parts. Their ungloved hands were stained with blood as they picked up chunks of flesh and put them into thin plastic bags.

“They were all kids in there, young people,” said Hisham al-Masri. “Why would they do this? Where can people go?”

It was the second time in a week that a school run by the UN agency for Palestinian refugees had been hit, and the sixth in the last two weeks.

Doctors at the Kamal Adwan hospital in Jabaliya town had scarcely finished treating the wounded when casualties began arriving from the market.

Earlier, doctors had treated dozens of wounded from the strike at the school.

“There were something like 30 or 40 wounded brought here, most of them women, children and the elderly,” said nurse Abed al-Bahtiti.

“We had to amputate some people’s legs immediately.”

Scout volunteer Abdullah Kallash, 22, had been at the school picking up body parts after the blast.

“Many of the wounded had injuries to their lower half, to their legs,” he said.

Back at the school, children and men gathered to watch the grim spectacle of dead donkeys being lifted by crane and dumped unceremoniously into a skip, their entrails hanging out.

The area stank, but the school was still full of displaced people who had nowhere else to go.

Despite the carnage in Shujaiyya, others in Gaza City were able to make the most of the lull to buy much-needed provisions, with men queueing for hours in the searing heat to buy bread, with hundreds of people in each bread line.

“We’ve been here for four hours waiting to buy bread. We fled from Shujaiyya and are staying with relatives, 50 of us in one house,” said Mussa Jundiya, a father of five.

“We have just enough simple food, thank God, but no means of cooking because there’s no electricity since they hit the power station.”

Others in the queue said they had no roof over their heads.

“We’re sleeping on this,” said 28-year-old Rami al-Ghula, pointing at the ground.

“We’re living in the courtyard of al-Shifa hospital.”