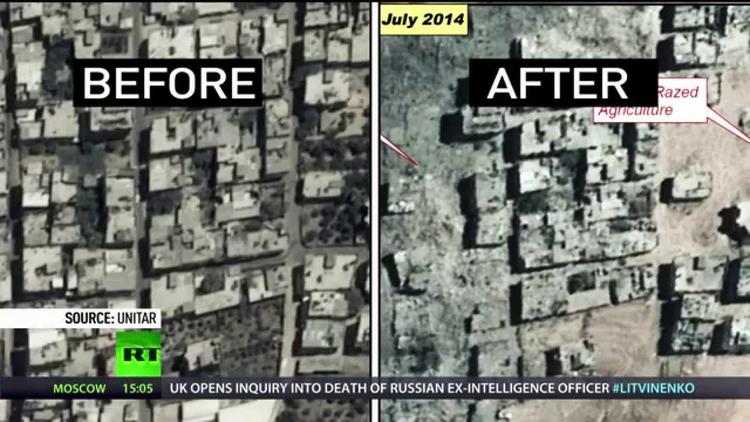 Back when the warmongers had hopes of ginning up a war between the United States and Iran during the Bush administration, one of their propaganda talking points was the Iran had “threatened to wipe Israel off the map.”

When we look at Gaza’s before and after pictures (below) it becomes clear that the charge is more appropriate to Israel itself.

The late Christopher Hitchens, who went off the deep end at the end of his life, joining with the Neoconservatives in hoping for Iran to be so targeted, was furious with me for questioning this underpinning of the war effort.

I pointed out that there is no such idiom in Persian and that the phrase was a quotation from Imam Khomeini in the 1980s, quoted by then president Mahmoud Ahmadinejad. What Khomeini had said was “This Occupation regime over Jerusalem must vanish from the page of time.” Ahmadinejad said he hoped the Zionist enterprise would collapse just as had the rule of the shah in Iran or that of the Soviet Union. Iran’s then president (who is not head of the armed forces) had no authority to order tanks to roll on Israel. There were several countries in between, so Iran cannot attack Israel militarily even if it wanted to. Israeli fighter jets would make mince meat of a conventional Iranian invasion, and anyway Israel has several hundred atomic bombs, which are rather a deterrent.

The argument from Ahmadinejad’s use of the Khomeini quote was based on a bad translation. But it was also a logical fallacy, belonging, I think, to the family of “irrelevant appeals.” The Iranian leadership does not like Zionism or Jewish nationalism, and wishes it would fade away and collapse (“vanish from the page of time”). This rhetorical hatred, however, has nothing to do with military threats. Iran has no air force or navy to speak of and its military budget is in the same ballpark as Norway and Singapore. Equating hateful speech to an intent to launch aggressive warfare is silly.

Note that the current president of Iran, Hassan Rouhani, elected last summer, doesn’t engage in over the top rhetoric and so there have been no attempts to demonize him and use him as a pretext for attacking Iran. Iran has the same regime, so the real difference in only that propaganda via ad hominems has become more difficult.

But after the last three weeks it is clear, in any case, who is in the business of actually wiping other countries off the map. The RT report below shows UN aerial photos showing entire neighborhoods in Gaza razed by the Israeli military. Over 5,000 building have been destroyed and over 26,000 have been damaged. This is a significant proportion of Gaza’s housing stock, and the Israelis want to make sure that the damage cannot be repaired. As the Gandolfo article makes clear, water sewage treatment plants aren’t working because the Israelis bombed the power station (this was deliberate; they knew exactly where it was). Babies have died in Gaza hospitals because their incubators ceased functioning.