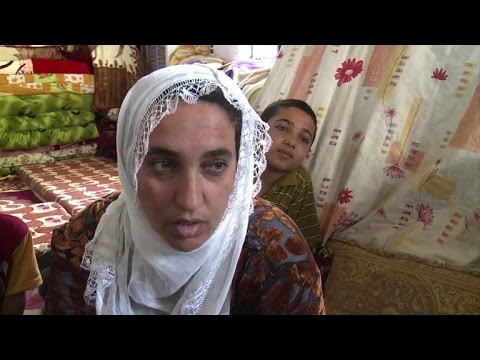 Demonstrators call on the government to help the besieged town of Amerli.

In Salahaddin, a drama of historic proportions is playing out in the town of Amerli. Surrounded by extremist territory, around 400 townspeople have been defending themselves for over 70 days now. The town, which is sheltering around 17,000 people, is under siege with power and water cut off. Locals can only wait and hope that their drama does not end in yet another humanitarian tragedy.

Since June 15, a small town in the Salahaddin province has been defending itself against Sunni Muslim extremists who surround it, controlling most of the other towns around it. Amerli, which is home to mostly Shiite Muslims of Turkmen ethnicity, has been under siege by forces from the extremist group known as the Islamic State, or IS, since mid-June.

Since the extremists took control of most of the area around the town, forcing other Shiite Muslim Turkmen into Amerli, it has been extremely difficult to get any goods or people in or out. The extremists have also disconnected water and power to the town.

As security analyst Michael Knights put it in a post on Foreign Policy magazine’s website: “This is Iraq’s other humanitarian crisis, the one no one seems to care about.”

For over 70 days now, the town has been protected by local fighters, many of whom have military backgrounds.

“Armed men have launched a number of attacks to try and enter the town,” one of Amerli’s residents told NIQASH. “But they have failed because of resistance from the local police and volunteers from among the townspeople.”

“There’s no drinking water, there’s no electricity and there’s a shortage of food,” says Khamis Nimeh, an Amerli resident. “The hospital in town is still taking patients even though there’s a shortage of medicines. But the people of the town are spirited. People who have never attacked anyone now only want to defend their town against attack.”

The townspeople, who are mostly Shiite Muslims, are certain that if the Sunni Muslim extremists are able to enter their town, they will be killed and the women and children taken captive.

Most of the towns around Amerli have been taken over by the IS group and their allies and locals have fled. The nearest town still under government control is Tuz Khurmatu, about 27 kilometres away from Amerli. However another town called Sulaiman Bek, about 10 kilometres from Amerli, is on the road that connects the two and has been controlled by the IS group for several months now, even before the group managed to take over the northern city of Mosul in early June.

What is going on in Amerli is a historic and heroic siege, Shallal Abdul, the mayor of Tuz Khurmatu, told NIQASH.

“The IS group has launched six attacks on the town as they try to occupy it,” Abdul noted. “Since the beginning of this crisis three people from among the locals have been killed and more than 30 have been wounded.”

Calling upon the central government in Baghdad and the authorities in the semi-autonomous region of Iraqi Kurdistan to cooperate to free Amerli, Abdul concluded, “we hope to see an end to this blockade soon – especially after the liberation of Atheem in Diyala province.”

“Although there are an estimated 17,000 people in Amerli, everyone is ignoring what’s going on there,” Ali Mahdi, the spokesperson for the Turkmen Front, a political party representing the Iraqi minority, told NIQASH. “If they worked together the Iraqi army and Iraqi Kurdish forces could lift this siege. But sadly it is only the people of the town that have been defending Amerli since the siege began.”

The Iraqi army is sending helicopters to bring food, medicine and ammunition into Amerli but they are regularly shot at by the extremist fighters surrounding the area. “And the helicopters cannot take many injured out of the Amerli either,” Mahdi explains.

The senior Turkmen politician appealed again to both domestic and international players to help the people of Amerli. But he was also critical, saying that, “some voices are heard on the international scene and others were not”. As an example he talked about organizations that focused only on those displaced from Sinjar and the Ninawa Plain – by this he means Iraq’s Yazidi and Christian minorities – while ignoring other groups, like Iraq’s Turkmen minority.

While the fighters of Amerli continue to defend their town and those in it, support has come from some unusual channels. A number of independent activists and journalists have launched campaigns on social media to support the besieged townspeople; they post pictures from the area and comments that they hope will inspire the exhausted locals.

There has also been a demonstration in Baghdad calling upon authorities to help Amerli.