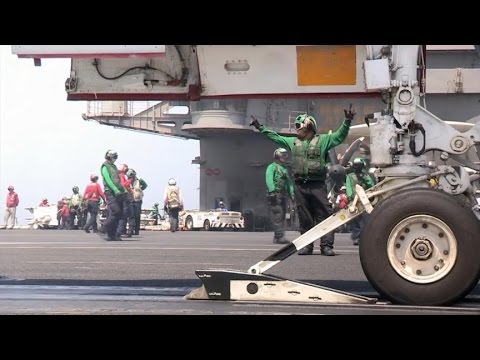 The United States of America has no claim on the language of “humanitarian aid” to Iraq after what it did to that country. It is rather as though Washington should send Meals Ready to Eat to the good people of Hiroshima and Nagasaki. One is happy that the US has dropped food aid for the Yezidis trapped on a mountain after they escaped the so-called “Islamic State” of self-styled “caliph” Ibrahim. But the US press either has a short memory or is being disingenuous when they talk about a humanitarian mission in Iraq!

The US invasion of Iraq in 2003 and the subsequent 8-year military Occupation of that country caused over one million Iraqis to be displaced abroad, especially to Syria and Jordan, but some of them got to Sweden and a few to the US itself.

Further about 4 million Iraqis were displaced internally. Baghdad underwent an ethnic cleansing of its Sunni Arabs, with the proportion likely falling from 45 percent of the city to 15 percent or so of the city. The “Islamic State” push on the capital in concert with other Sunni Arabs is an attempt to recover what was taken from them by the Bush administration. Likewise, the Sunni Turkmen of Tel Afar under the Americans were ethnically cleansed and the town became largely Shiite. Turkmen Shiites are among the northern ethnic groups now menaced by IS.

How many Iraqis died because of the US invasion, i.e. the extra mortality rate, is hard to estimate. But likely it was at least 300,000 persons. Typically wounded in war are three times as many as the killed, so that would give us nearly 1 million wounded. Most of the 300,000 who died were men, many of them with families, and in Iraq there were few or no insurance policies. That left 300,000 or so widows and likely 1.5 million orphans.

“Humanitarian mission” may sound good to American ears. But there is no way a few food drops can make up for what the US did to Iraq.

ABC News: “Crisis in Iraq: US launches Second Round of Airstrikes in Iraq”