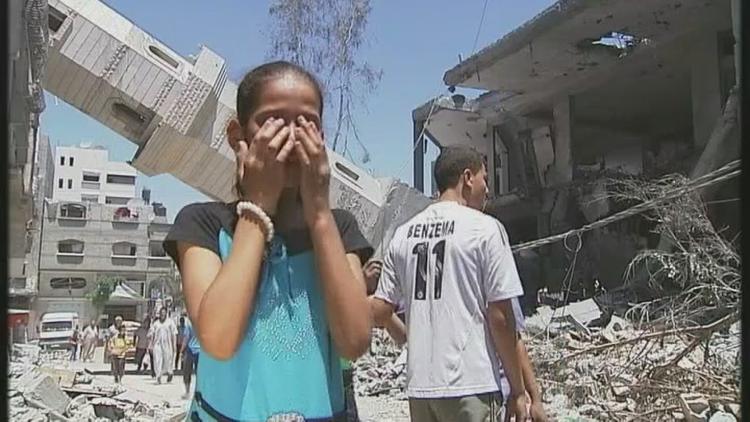 By Luisa Gandolfo, University of Aberdeen

When Operation Protective Edge commenced on July 8, Israel pledged to draw on lessons learned from previous conflicts to ensure that this operation would not near the duration of the 2008-2009 Gaza War. But it’s been three weeks and one day since the conflict began, bringing it in line with Operation Cast Lead.

The infrastructural damage of the previous war has yet to be repaired – and now it has been set back further, following the destruction of Gaza’s sole power plant. Serving 1.8m people, the plant was struck during a seven-hour bombardment in which 128 Palestinians died, bringing the number of fatalities to more than 1,200 Palestinians and 53 Israeli soldiers.

As Israeli prime minister Benjamin Netanyahu, warned of “a long conflict ahead”, residents of the Gaza Strip now confront severe water restrictions as the loss of the station paralyses the region’s water pumps and electricity will be unavailable for months to come.

Water has assumed a significant role in the conflict: on a basic level it is a source of life and livelihood; at others, it is intertwined with laws that can shape the lives of the civilians dwelling in the West Bank, Negev and Gaza.

When a water source is struck, it adds an additional lethal dimension to the conflict, as survival is not just threatened by weapons, but by the silent killers, disease and deprivation.

During the Gaza War water was a prime casualty, when military attacks caused US$6m of damage through the destruction of four water reservoirs, eleven wells, sewage networks and pumping stations.

By 2012, 95% of the water was unfit for human consumption as pollutants infused the remaining 117 water wells and the contamination has been exacerbated as efforts to rebuild or sustain existing sources are stymied by transport restrictions. The result is a deterioration of the water and sewage system, also caused by over-pumping to counter dwindling water supplies.

The fall in water levels is a regional issue. According to a 2013 NASA study, between 2003 and 2009 the Middle East lost 144 cubic kilometres of stored freshwater, an amount on par with the loss of the Dead Sea. Facing rising pollution and falling supplies, prior to the current unrest 80% of Gazans paid a third of their household income for fresh water.

In the West Bank and Negev, the issue of water is no less bleak: acts of sabotage, the denial of permits to own water cisterns and limitations on access to water sources have been an enduring part of the landscape. Water has become a means of control, determining the future ownership of a plot of land, the success or failure of a business, or the means to render a community unlivable.

The designation of land for agriculture or forestry affords a means to prohibit the development of existing villages: once designated, residents are banned from constructing further structures, including water cisterns. Should they proceed with the structure, it will be demolished, regardless of its purpose.

Atir, near Beer Sheva, hosts a community of 500 Bedouin, many of whom were relocated to the village in 1956 by Israeli authorities. At the time, it was deemed a suitable location; in 2013, it was decided that it would better serve as a forest and security forces demolished the homes of 70 people, followed by the tents in which the displaced were living.

In the wider region, wells have been drilled to divert water to the settlements in the West Bank, disrupting Palestinian water lines and in a more overt manner, confiscating water tankers. Deprived of their water source, West Bank residents pay up to 400% more per litre than those directly connected to the water network, while in 2012 water access in the West Bank stood at 25% less than Israeli access.

Once water is gathered, the quest does not end; rather, the new challenge is retaining the drinkable water. According to Oxfam, between 2011 and 2012, 62 European-funded water structures were demolished in Area C, including in the Jordan Valley.

The sabotage emanates from two sources: demolition by the Israeli army, or by individuals from the nearby settlements. In the latter case, contamination has been caused by putting old car parts or animal carcasses in the cisterns.

In the former, bulldozers are used to destroy structures deemed illegal; in other instances, individual acts of sabotage can be driven by ennui. According to a 2009 report by Amnesty International, soldiers shot water tanks to pass the time, since “water tanks are good for target practice; they are everywhere and are the right size to aim at and calibrate your weapon, to relieve your frustration … or to break the monotony of a stint of guard duty.”

Such sabotage strikes the owner hard, as each cistern costs the equivalent of a year and a half’s wages, quite apart from the deprivation the destruction of a water source inevitably entails.

Just as the West Bank and Negev have witnessed a slow, steady process of demolition, Gaza is accelerating towards a profound humanitarian catastrophe. To the displacement of 200,337 Palestinians can be added restrictions on water and the absence of electricity to power what remains of the health centres and the 85 shelters around the Strip.

On July 14, the prime minister’s spokesman, Mark Regev, stated: “If we know that innocent civilians will be hurt, we will call off the operation.”

Cutting off the electricity means cutting off the life support to those who have a chance to survive the bombardment, whether in hospital or in the shelters. Water is needed by all and by removing that source, all have been condemned alike.

Luisa Gandolfo is a Lecturer in Peace and Reconciliation in the Department of Sociology at the University of Aberdeen. Her work focuses on identity, nationalism and faith-based movements in Palestine/Israel. Her book, ‘Palestinians in Jordan: The Politics of Identity’ (I.B. Tauris, 2012) explores identity, integration and nationalism in the Palestinian communities of Jordan.

Channel 4 News: “In Gaza’s rubble, with the families who live there”