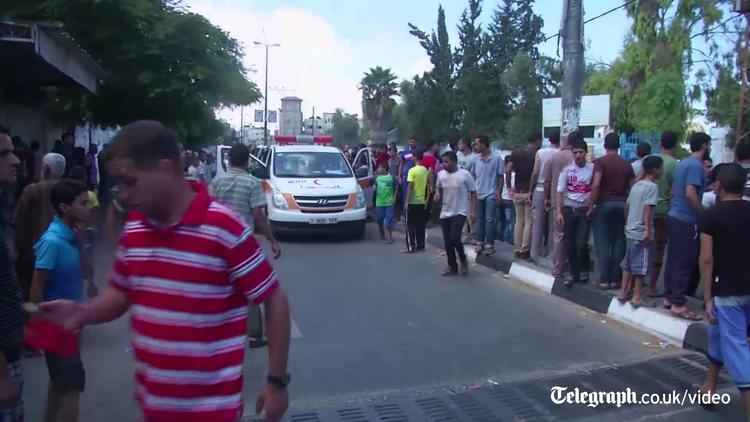 The US State Department became a little testy with Israel on Sunday over the 6th school shelling by the Israeli military, which killed 10, saying

“The United States is appalled by today’s disgraceful shelling outside an UNRWA school in Rafah sheltering some 3,000 displaced persons, in which ten more Palestinian civilians were tragically killed,” reads the statement from State Department spokesperson Jen Psaki. “We once again stress that Israel do more to meet its own standards and avoid civilian casualties.”

As for the standard Israeli military pretext for such war crimes, that Hamas was hiding out in the school or firing from the school, no reporter on the ground has seen any evidence of any such activity by Hamas in schools where there are people. Then the Israeli military obfuscates things by saying that Hamas was “in the area.” Since Gaza is so small, I suppose they are in the area of almost everything. But the State Department didn’t let Tel Aviv off the hook this time: “The suspicion that militants are operating nearby does not justify strikes that put at risk the lives of so many innocent civilians.”

Despite this bold criticism, the State Department and the US government won’t actually do anything about Israel’s lawlessness in Gaza. That is because the US is a full ally of the Likud government in its war on Gaza, which is configured as a fight to destroy or attrite the capabilities of the Hamas party-militia, a Muslim fundamentalist movement that has foresworn any attack on US facilities or interests. As the head of US military intelligence recently testified, however, if Hamas were destroyed something worse would almost certainly take its place. That is because you can’t expect people to live the way Israel makes them live in Gaza without their forming a resistance movement. Since they are kept poor and on the edge of hunger, the resistance movements they throw up are lean and hungry, and as ruthless as the Israeli army.

Here are the ways that the US is actively helping Israel in its war on Gaza:

1. The US shares its raw signals intelligence directly with Israeli intelligence, enhancing Israeli eavesdropping and surveillance capabilities, as Glenn Greenwald shows in a new article for Firstlook. Israel somewhat ungratefully repaid the favor by collaborating with Russia to spy on John Kerry during his failed peace negotiations.

2. The US continually replenishes Israel’s ammunition. If Washington were actually so distressed about the UNRWA school shelling, it could just stop sending the shells for a while. It did this to Egypt after the massacre at Rabi`a al-Adawiya last summer.

3. The US State Department actively helps Israel to economically blockade the civilians of Gaza. It even pressures Egypt to uphold the blockade (which is why it is silly to say that Egypt is also responsible for the siege of Gaza; Egypt doesn’t have a choice in this policy that is made from Tel Aviv and promulgated from Washington).

4. Amnesty International shows that “Since 2012, the USA has exported $276 million worth of basic weapons and munitions to Israel, a figure that excludes exports of military transport equipment and high technologies.”

5. The US actively opposed the granting by the UN to Palestine of the status of nonmember observer state. It is this status that Palestine could use to go to the International Criminal Court and get a judgment against Israel for its illegal squatting on Palestinian land in the West Bank. That the US opposed Palestine having standing to apply to the ICC shows how hand in glove Washington is with Israel.

The US cannot serve as honest broker in Israel-Palestine negotiations because because its government is overwhelming committed to and identified with Israel, including in this war. That is why President Obama keeps mouthing propaganda like that Israel has a right to defend itself (it doesn’t enjoy an absolute right of that sort– its defense has to be proportionate and within international law). The US political system is the most corrupt in the industrialized world, and our representatives have simply been bought and paid for by Israel fanatics like Sheldon Adelson or Haim Saban (the latter has also taken over Middle East analysis at Brookings, which used to have an independent editorial line). It is scary since the Likud took over, since it is just as though a Serbian Lobby in the 1990s had bribed Congress to support Slobodan Milosevic.