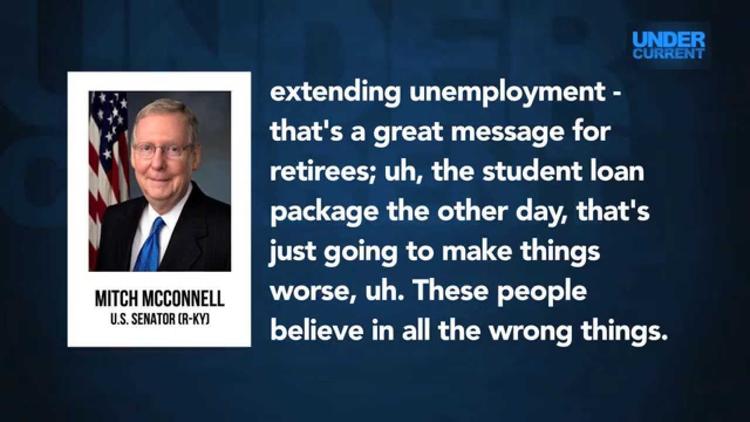 By Nicole Girard via Liberals Unite

Mitch McConnell really does not care about our problems. The way he talks about the needs of average Americans, you’d think we were his sworn, personal enemy.

At a Koch Brothers Summit in Dana Point, California this summer, the conscience-less, corporate shill basically promised our country’s head on a gold platter to his billionaire gang of perverse, psychotic donors.

In a leaked audio-recording, the Kentucky Republican swore to devote himself to the singular task of more fully lining the pockets of his audience: people so rich they could survive any tragedy, any sort of economic downturn, another of McConnell’s government shut-downs, effortlessly and without a care.

His words are revealing:

No money can be spent to do this or to do that.

Let’s stop right there. “This or that,” huh? What is “this or that?” Everything non-billionaires need?

We’ve known for a while McConnell and his donors are contemptuous of the non-rich but it’s a bit of an eye-opener to see that these essential issues are mere objects of annoyance to the unimaginably privileged. Those whose only fear is that the lowly masses may take an unnoticeable crumb of their corrupt and ill-gotten fortunes.

And we’re not going to be debating all these gosh darn proposals. That’s all we do in the Senate is vote on things like raising the minimum wage (inaudible)—cost the country 500,000 new jobs; extending unemployment—that’s a great message for retirees; uh, the student loan package the other day, that’s just going to make things worse, uh. These people believe in all the wrong things.

Perhaps one of the most offensive parts is his use of the term, “gosh darn.” Really, Turtle? You’re nothing less than ruthless, cussing would probably be the kindest thing you’ve done all week.

The fact that we live in a time of historic income inequality is no accident. It’s been engineered by puppets like McConnell. The standard CEO, who now earns eight-figures, is paid roughly 257 times what the average worker earns. Economists concede that while we need inequality to thrive, the level of inequality we currently have is unsustainable. They support the Democrat proposed minimum wage hike to $10.10 an hour, which would lift 4.6 million people out of poverty:

That’s a significant increase in the quality of life for our worst off that doesn’t require the government to tax and spend a single additional dollar. And, given that this policy is self-enforcing with virtually no administrative costs while challenging the employer’s market power, it is a powerful complement to the rest of the policies the government uses to boost the living standards of the worst off, including the Earned Income Tax Credit, food stamps, Medicaid, etc.
A higher minimum wage will lead to a significant boost in incomes for the worst off in the bottom 30th percent of income, while having no impact on the median household.

Seems like a no-brainer, but, it would make McConnell’s wealthy donors sad. So Turtle-brain will fight it.

Forty percent of households headed by someone under the age of 35 are saddled with student debt, unable to buy homes, raise families and secure their futures. This doesn’t just hold back individuals — it holds back our economic recovery. Meanwhile, Congress manufactures false debt crises instead of solving this very real one… The United States could and should do much more to help middle- and low-income families afford postsecondary education — especially at a time when our economic growth depends on an educated workforce.

This loathsome obstructionist vows to not even allow a debate on the very things stopping members of the middle and lower classes from getting anywhere in life. Gee thanks Turtle breath, you’re a stand-up guy.

The mounting evidence that we need real economic reform on every level is undeniable but it’s so clear this shell of a man is barely even in possession of himself. The lengths to which McConnell’s donors own him comes through in these cow-towing reassurances that he will, in fact, eviscerate the middle class and poor like a dutiful little boy. What a disgrace. He’s no leader.

McConnell’s thug-filled audience is living proof of the bizarro-world extent to which greed can corrupt. I can’t imagine why these billionaires are never satisfied. Why are they so afraid of allowing hard-working, average people to live with some small semblance of comfort and dignity? What more do they need?

McConnell is, and for a very long time has been, nothing but a detriment to the government and the country. He is the opposite of a patriot and is not fit to lead. It’s time for him to hole up in his shell where he can only cause harm to himself.

Please Kentucky, VOTE HIM OUT.