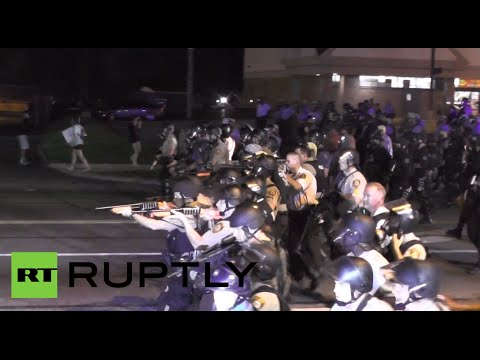 By Chris Cocking, University of Brighton

The town of Ferguson, Missouri has now seen ten days of almost nightly disorder following the shooting of black teenager Michael Brown by the police. The decision to bring in the National Guard has not quelled the disorder and in fact may be aggravating the situation.

Society often has a tendency to fear crowds and to presume they need to be tackled by force but it is in fact this force that can make a tense situation spill over into violence. In many cases it is the cause of a problem, not the solution.

Taking on the crowd

During the night of August 18, 31 protesters were arrested in Ferguson and Amnesty International observers were told to leave the scene.

The police deployed in the evenings in Ferguson are heavily armed with a range of sophisticated weapons. They have tear gas, sonic devices, baton rounds, and stun grenades, all of which make them look more like soldiers than civilian policeman.

These devices are indiscriminate crowd control weapons designed for dispersal and do not differentiate between protesters. Everyone is in the firing line. It’s an approach that has long been questioned by researchers of crowd behaviour. Many have argued that treating crowds forcefully and indiscriminately often escalates disorder rather than calming it. If a crowd thinks it is being treated unfairly, it will react against this treatment which can in turn cause more forceful police responses, resulting in an escalating cycle of disorder.

The language used to describe the protests in Ferguson also reflects our pervasive mistrust of crowds.

Ferguson Police Captain Ron Johnson provided a prime example of this problem when he said at a press conference that “a small number of violent agitators … hide in the crowd and then attempt to create chaos”. I have seen no CCTV footage to support this assertion and I would take issue with the premise behind it anyway. He implies that a a minority of people with malicious intent are responsible for inciting the peaceful majority to behave violently. This assumes that crowd members are easily influenced by others to do things that they would not otherwise do. If crowds were this easily influenced by others, why don’t they listen to police warnings to disperse?

The idea that crowds are gullible and uncritical of any social influence is largely a myth. If violence does occur it rarely happens because a violent minority has whipped up the the crowd. It is more likely because the police have treated the crowd in an indiscriminate way. This psychologically unites crowd members to act together against what are perceived as illegitimate attacks against them.

A study of the figures presented by the media and politicians to illustrate “irrational” criminality during the 2011 riots in the UK tells a similar story. The statistics used to describe these events were often selective or misrepresented and the conclusions drawn were not supported by detailed examination of what actually happened.

Locals from Ferguson also seem to reject this narrative of criminality and there have been much more positive accounts of recent events in the town told by those actually involved in them. The BBC has reported how some people on the ground perceive an almost festival-like atmosphere in Ferguson and described a sense of “love and support” in the crowd. Others describe locals protecting local businesses from looters. A photo circulating on Twitter even appears to show rival gang members, wearing different coloured bandanas, standing together to protect a shop.

This also shows that protestors are placing limits on the crowd’s behaviour in Ferguson. This undermines another common myth of crowd disorder – that once riots begin, anything goes and “mob rule” takes over. Evidence from the London riots suggests that the crowds behaved in complex ways. People who had been fighting police would stop to protect shops from looters and despite hostilities with police, the crowds would rarely attack fire crews or paramedics.

The disorder in Ferguson can’t be explained away by blaming a minority of bad-intentioned individuals. And responding to legitimate protests with increasingly militarised policing and force will only serve to further alienate the people of Ferguson.

Responding to these events with such overwhelming force is a move based on a fundamental distrust of crowd behaviour. The US police are probably among the most heavily armed in the world but that has not stopped urban disorder from happening. Something is clearly badly wrong when US citizens in 2014 are openly talking about their own police as an occupation force. We have to look at the broader social context when events like this happen and escalate. Long term solutions will not be found by turning police forces into the paramilitary outfits we are currently seeing on the streets of St Louis.

Chris Cocking does not work for, consult to, own shares in or receive funding from any company or organisation that would benefit from this article, and has no relevant affiliations.