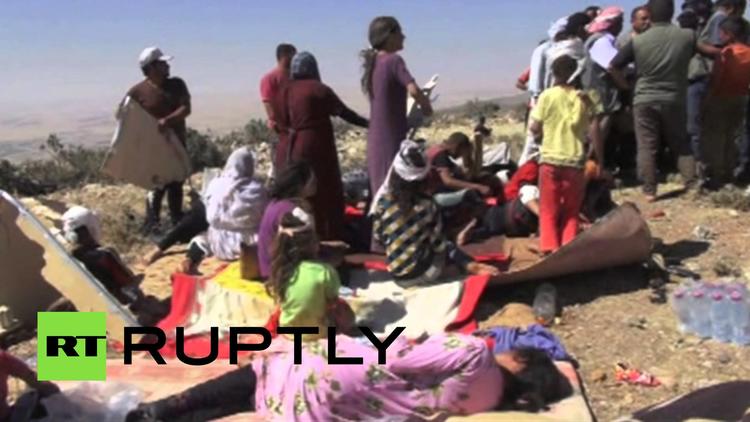 Fearing for their lives, more than 150,000 Yezidis fled Sinjar and surrounding villages to mountains north of the city on August 3, 2014 when the Islamic State of Iraq and Syria (ISIS) attacked the area. Some young and elderly are dying from the harsh conditions.

I visited a Yezidi village south of Dohuk last Wednesday — a magnet for 60,000 to 70,000 Yezidis fleeing fighters from the Islamic State of Iraq and Sham (ISIS). Those not taken into homes of local residents were camped in classrooms, schoolyards, or buildings under construction. They had bread and water, but not much else, having fled their homes a few days earlier with no more than the clothes on their backs.

The next day, a colleague found only two families at the village – the rest, thousands of them, had fled overnight after ISIS seized control of nearby towns populated by Iraqi Christians. The Yezidis, an Iraqi minority who are ethnically related to Kurds and practice a 4,000-year-old religion, feared they could not count on protection from Kurdish peshmerga forces who control Iraqi Kurdistan.

Many more Yezidis – upwards of 150,000– fled Sunday morning from Sinjar and surrounding villages into rugged mountains a dozen or so kilometers to the north. There, they found few means of sustenance or even shelter amid the mountains’ sparse vegetation – no water to speak of, and little by way of shelter from summer temperatures that can soar to 120 Fahrenheit. Perhaps as many as 40,000 managed to descend on the northern side and make their escape that same day, before ISIS surrounded the mountains.

Over the following days, a few thousand more trickled out in small groups, braving ISIS snipers, and made their way into Syria before crossing back into Iraq, with the help of Syrian Kurdish fighters, some distance to the north of Dohuk.

I met with more than a dozen of those who escaped the mountains and also managed to speak by cellphone with other Yezidis still stranded there. One Yezidi activist in the village I visited showed me a text message he had just received on his phone: “Evening is coming, send helicopters with food and water by tomorrow. Otherwise you will be hearing about a mass grave.”

That was three days ago. The Pentagon announced Friday that US planes had dropped supplies of food and water. I spoke today with a doctor among those still in the mountains. He said there were about 5,000 other Yezidis in his immediate area, and that he had seen no sign of the air-dropped supplies. He said 10 to 15 people were dying each day, a third to a half of them young children, mainly from dehydration. Four more people had already died that day. “No water, no food, no rescue, no way out,” he said. The doctor said he had heard of two cases of women who died in childbirth.

Every one of the many displaced Yezidis I spoke with told the same story of how this started. On Sunday, August 3 at about 4 a.m. they heard gunfire. Three or four hours later the Kurdish peshmerga forces that had been their protection withdrew without explanation. One of the Yezidi peshmerga asked the local commander why. “We have no orders to fight” was the response. The next day, the Kurdish Regional Government president, Masoud Barzani, said, “We decided to go beyond the defensive position and fight the terrorists to the last breath.” But according to the Yezidi accounts, there was no “defensive position” to begin with, and there has been little evidence so far of any Kurdish offensive.

The ISIS strategy since capturing Iraq’s second largest city, Mosul, a month ago, is becoming increasingly apparent: to clear the area between Mosul and the Tigris river to the west of non-Muslim minorities – make that non-Sunni Muslims, since Shia are also squarely in ISIS’s gun sights. An ISIS photospread distributed shortly after the capture of Sinjar showed them executing people who were clearly civilians.

The slides did not show the other horrors ISIS has been inflicting on those who fall into their clutches. At least a dozen Yezidi men I spoke with told how ISIS had abducted scores of women and girls, detaining large numbers in a school in Tel Afar, a town just northwest of Mosul that ISIS captured in late June. Others had been trucked across the Syrian border to a detention center in the ISIS-controlled town of Huli.

Asad, a young man I spoke with today, described how ISIS abducted some 50 members of his extended family as they tried to escape from the village of Khana Sor and forced them to drive across the Syrian border. His brother Raad, as he drove one of the cars, had kept his cellphone open on his lap, on speaker, while Asad in Erbil kept adding funds from scratch cards to keep the line open. “I was blind, Raad was my guide,” he said. Raad described to him over the course of four hours the route that ISIS forced the captured family to drive, until they crossed into Syria.

“I lost contact then,” he said. The next day he tried the numbers of another brother. Someone else answered. “Do not call,” that person said. “We have all their mobiles, we don’t know where they are,” and hung up.