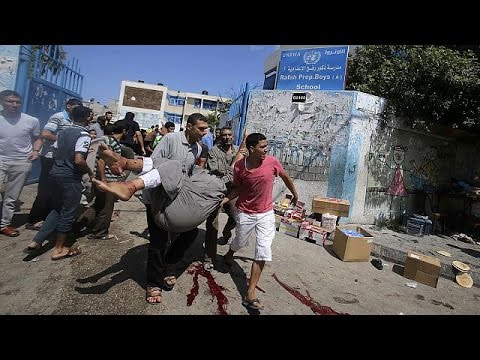 By Alan Smith, University of Ulster

The shelling of Jabalia Elementary Girls’ School in Gaza on July 30 by Israeli forces was a shocking example of modern military action. The shelling was the sixth time a United Nations school has been struck since the current hostilities began.

Increasingly and tragically, education is at the centre of a humanitarian crisis in Gaza as people flee their homes to shelter in places like schools. It is a cruel reminder that in modern conflicts the civilian population suffers most. The attacks on UN schools have been described by UN secretary general Ban Ki Moon as “shameful”, “outrageous” and “unjustifiable”. A spokesman for the UN Relief and Works Agency (UNRWA) said international humanitarian law has been breached.

What is a UN school?

The UN schools in the region are provided by UNRWA, which is mandated to provide services and programmes for: “persons whose normal place of residence was Palestine during the period June 1 1946 to May 15 1948 and who lost both home and means of livelihood as a result of the 1948 conflict” and their descendants.

UNRWA operates in Gaza, the West Bank, Syria, Lebanon, and Jordan, providing services to some 5m registered Palestinian Refugees, 40% of who are under the age of 18. Education accounts for more than 50% of the $1.4 billion UNRWA budget, providing basic education aimed at combating the high levels of poverty and unemployment experienced by refugees. UNRWA is funded almost totally by voluntary contributions from donors, but at the beginning of 2014 it had a cash deficit of $65m. The education of each child costs $755 per year.

The agency operates one of the largest education systems in the Middle East, running 700 schools which provide education for 500,000 pupils. Nearly half of these schools are located within the region’s 58 refugee camps. It also runs nine vocational colleges, two educational science facilities and two teacher training institutes. Pupils in UNRWA schools follow their host country’s curriculum and textbooks with some supplementary resources on human rights provided by UNRWA.

Like any other UN agency, commitment to neutrality and impartiality is central not only to its ethos but to guaranteeing the safety of its staff and programme users. The organisation maintains a legal framework requiring neutrality of staff, facilities and beneficiaries.

UNRWA implements a monitoring process to ensure that its neutrality is maintained and protected, including regular checks on staff, disciplinary procedures and pre-employment checks. Regular training highlighting and reinforcing UN neutrality are carried out for staff.

On occasions where weaponry such as Hamas rockets have been found in UNRWA schools the organisation has publicly condemned its presence and noted all parties of its discovery, making clear that at all times, and particularly in times of conflict, that the sanctity of UN neutrality must be upheld.

UNRWA has said it sees the attack on Jabaliya Elementary School as a breach of international law by the Israel Defence Forces and has called on the international community to take “deliberate international political action” to bring the current suffering to an end.

The letter of humanitarian law

International law and human rights instruments are clear, not only about the sanctity of education but also the protection of children affected by conflict. The United Nations Convention on the Rights of the Child applies to all children without discrimination (article 2). It reaffirms the right of every child to life (article 6), insists on the protection of all children from all forms of violence (article 19) and makes clear the right to education (article 28).

In addition, article 38 of the convention explicitly states that governments must do everything they can to protect and care for children affected by war. The breach of any part of the convention should be a matter of deep concern to the international community.

The Global Coalition to Protect Education from Attack (GCPEA) states that above and beyond these universal rights:

It also notes that failing to take all feasible precautions to minimise harm to civilians, such as using education institutions for military purposes while students and teachers remain present, is also breaching international law.

The United Nations Monitoring and Reporting Mechanism on Children and Armed Conflict is mandated by the United Nations to monitor attacks on schools, teachers and students, as well as the military use of schools. Based on this information, the UN Security Council can take action against parties that attack education. The MRM reports on “six grave violations”:

But for international law to have any effect, it needs to have two things: the power of accountability, and the understanding and respect of parties involved in armed conflict.

The neutrality of UNRWA schools, particularly in Gaza, must be reinforced and protected. The lives of children should be our first concern.