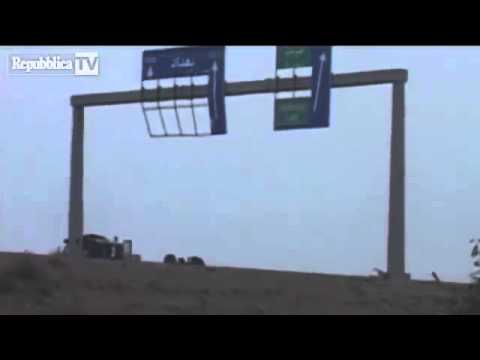 By Mustafa Habib | Fallujah | via Niqash.org

Recently most of the attention has been on northern Iraq. But military action in western Iraq has been going on for months, after areas came under control of Sunni Muslim extremists and other anti-government groups. Some, like the city of Fallujah, have been under constant attack from the Iraqi government. NIQASH went there to find a city demolished, people without hope – and another potential uprising.

Getting into Fallujah is far from easy. One must pass through dozens of Iraqi army checkpoints followed by dozens of checkpoints manned by the gunmen who now control the city. Unless one is doing humanitarian work one cannot enter or exit. And if the humanitarian aid workers don’t leave the city again at a pre-specified time, they are regarded with suspicion and may be detained.

Additionally two months ago, the extremists who control the city gave an order that all journalists inside Fallujah must stop working. Any violations would be heavily punished, they said.

So anyone who enters now – whether they are coming for humanitarian purposes or to visit a relative – is put under close surveillance. Masked gunmen on the streets observe visitors’ activities and communicate visitors’ movements through a radio network. They want to be sure that anyone coming into the city is not a government spy or a journalist.

The main streets leading into Fallujah from the four major entrances to the city are booby trapped with explosive devices. These are arranged in a complicated and random fashion and nobody other than the gunmen who control the city knows where they all are. That means that nobody can enter Fallujah unless they are guided by one of the fighters.

Once inside the city, you quickly see how exhausted everybody looks. Locals’ faces reflect myriad untold, sad stories. Most have lost at least one family member during this siege. There are also plenty of serious injuries on display. Many locals have now joined the armed groups controlling the city out of a desire for revenge.

Many of the buildings are damaged or completely destroyed. Anyone who manages to get into Fallujah will see a city that looks as though it’s out of a picture taken just after World War II.

“Some areas – such as al-Hay al-Sinaie and Nazzal – have been completely levelled,” one of the city’s tribal leaders, Ahmed al-Halbusi, told NIQASH. “It would be almost impossible for people to go back and live in those areas again because they are so damaged. Additionally the Iraqi air force is still shelling those areas even though we have no idea why.”

Al-Halbusi was now looking after a five-year-old boy named Othman. “His whole family was killed in the Nazzal area,” al-Halbusi explains. “He was playing in his garden and his family were in the house when the house was hit. He was the only survivor.”

There are dozens of similar stories. The Iraqi army has been attacking Fallujah since the beginning of the year. Every day the army shells the city two different ways – with ground artillery from their camps near the city. One of the major camps is the nearby Mazra camp.

The people of Fallujah say that this method seems to be fairly ineffective and doesn’t cause a lot of damage. They are far more concerned about the second method the Iraqi army is using: air bombardment.

Military helicopters bomb the city too – some of these helicopters are old ones, dating back to Saddam Hussein’s army, and some are new Russian-made machines, received recently. The helicopters often use barrel bombs, locals say. When these land and don’t explode, they try to disarm them.

“We don’t want to hurt civilians,” says Karim al-Mamouri, a lieutenant in the Iraqi army who is supervising one of the units besieging Fallujah. “We only want to hurt the extremist groups who have been controlling this city for months now. We have coordinates about their whereabouts inside the city and that’s where we aim at.”

Obviously though, this plan doesn’t always work – there have been many civilian injuries and deaths in Fallujah. In an official statement dated August 18, 2014, Ahmad al-Shami, an administrator at Fallujah’s public hospital, wrote that an estimated 700 people have been killed in the city since the beginning of the year and around 2,200 wounded. “The general hospital has not been spared either,” he went on to say. “It has been bombed five times over the past few months.”

One thing the lieutenant is right about is that the Sunni Muslim extremist group known as the Islamic State, or IS, is in control of Fallujah now. The group forced all the other Sunni Muslim anti-government groups inside the city to hand over their weapons. In fact, a lot of the members of these factions chose to leave Fallujah rather than remain there at the IS group’s mercy.

For example, last Saturday gunmen from IS led a tour of the city, parading blindfolded prisoners from the Mujahedeen Army. This militia, which controls terrain north of Fallujah, had declared war on the IS group.

The number of IS fighters in Fallujah has also increased since anti-government forces first took over the city in January. At first there were an estimated 600 members of the IS group in Fallujah. Now there are approximately 2,000 as others from inside the city have joined and as fighters have arrived from neighbouring Syria.

The IS group has also cunningly used the feelings of resentment, frustration and desire for revenge that exist in Fallujah, particularly among local youths who have lost members of their families.

The Iraqi government estimates that before the city was lost, Fallujah had around half a million residents. Now almost three quarters of them have left the city.

“Those who stay here are living by luck alone,” says Karim al-Bajari, one of the residents who still remains. “We live as though we are playing hide and seek continuously. We hide when the shelling starts or when we hear planes.”

Even though the city is supposed to be under siege, al-Bajari says that the fighters have their own secret paths into northern parts of Baghdad. They bring food and medicine into the city along these; after all they are supposed to be responsible for the administration of the city.

The dead of Fallujah also have a story to tell. The only cemetery in Fallujah – the Al Shuhada, or Martyrs’, cemetery – is overcrowded. Some days the deceased are being buried together in mass graves, one of the cemetery workers told NIQASH.

“In one day, we were forced to bury four children in one grave,” the worker says. “Their body parts got mixed together. And slowly the cemetery is becoming way too crowded. We are even burying people on the pathways now.”

This has led to some Fallujah residents simply burying their dead at home, in their back yards. Those who live in the city’s most dangerous areas have been storing dead relatives in refrigerators until they can get out and find a piece of ground in which to bury them.

Fallujah has also stopped holding funerals. “We are not holding gatherings like that at the moment because these kinds of events are usually attended by dozens of people and that makes them an easy target for the military planes,” says Siddiq al-Tamimi, another tribal leader in Fallujah. “The Iraqi army thinks these are gatherings of militants.”

“The army has tried to enter Fallujah more than 70 times over the past eight months,” Abu Aesha al-Thiyabi, a leading member of one of the less radical militias inside Fallujah, told NIQASH. “But every attempt has failed. This is because of the strength of the tribal factions defending the city and the weak training of the Iraqi army, who usually turn and run away when confronted directly.”

“We are against the things that the IS group do,” al-Thiyabi added. “We don’t support their acts. But we do have a common enemy: the Iraqi army, who are trying to kill us all with any means available to them.”

Locals in Fallujah say that there have been a number of highly secret meetings in Fallujah over the past weeks, attended by tribal leaders and the heads of the various armed factions fighting in Fallujah.

Sources say that these meetings are being held with the aim of concocting a plan to expel the IS group from the city. The various tribal leaders and militia heads want to run the city themselves, but they want to do it in a non-extremist way.  However they also do not want to see the Iraqi army return and they only want local police to administer the city’s security.