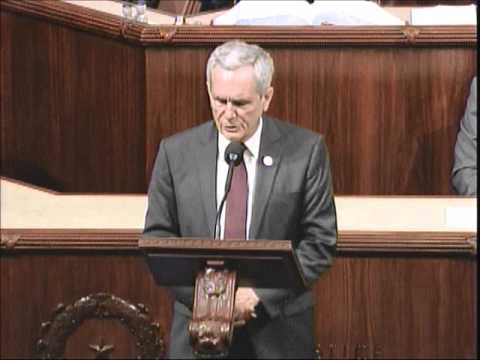 The Middle Eastern tragedy, in which this resolution will further entangle America, is directly related to the wholly unnecessary Bush-Cheney invasion of Iraq. Having learned so little from the sacrifices of that conflict, the Congress now approves greater involvement in a Syrian civil war that has already taken almost 200,000 lives.

The Administration has affirmed this very day that what it is talking about is definitely a “war” – a declaration of war, while it seeks to avoid this Congress declaring that war – a Congress in which too many of the people’s representatives fear making a decision today on whether to declare war.

Instead, we vote on an amendment here to authorize the Administration to do what it is already doing in Jordan, while declining to consider a vote on what it should not do without specific Congressional authorization.

Reliance on the resolutions approved by this Congress, on this Floor, over a decade ago, in 2001 and 2002, is very instructive. First, it shows the dangers of open-ended authorizations. Such a resolution as we have today will likely govern not only the actions of President Obama, but of future Presidents.

Second, once begun, this Congress, even under Democratic control, has shown little ability to contain war. And third, despite billions expended and with courageous Americans on the ground, the results of more than a decade of trying to successfully train Iraqis and Afghans, have not been particularly encouraging. Indeed, the reality is American taxpayers have been compelled to pay for the arms for our enemies as well as for our allies.

Nor do we have any explanation today as to how taking a few Syrians for training in Saudi Arabia, a country with its own brutal history of regular beheadings, financing extremists around the world and opposing democracy most everywhere- —how that will work better than our previous training on the ground with Americans.

Rejecting the resolution today does not mean we should do nothing. When Americans are brutally murdered, the President already has the necessary authority, which he should use forcefully to go after these barbaric murderers. There is a significant difference between confronting the savagery of ISIS and initiating a multi-year war in the region. With the steadily growing number of US military on the ground in Iraq now approaching 2,000, and recurrent demands from the same people that led us wrongly into Iraq in the first place that we add even more on the ground, the danger of escalation is very real.

And now with our military leaders conceding that ISIS is a regional threat, it would kill as many Americans as it could, if it could—just as is true of some of the terrorist groups today in Africa. But with it being a regional threat, not a threat to our homeland today, the question arises of why the countries in the region, who are more directly impacted from ISIS, why aren’t they providing the bulk of the resources necessary to confront it? They are always content to have Americans kill as many of their enemies in their centuries-old conflict as we will kill. They would let the Americans do all the bleeding and all the paying for this conflict. A photo op with 40 countries does not an army make. Ultimately, this resolution, like our previous unwise invasion, will make our families less secure, not more secure. And that should be the ultimate test of our actions.