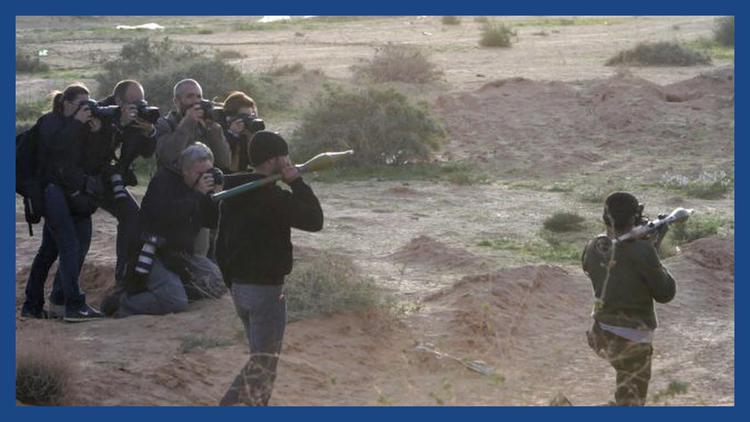 By Sarah Lazare via Commondreams.org

The Islamic State (IS) is now in possession of lethal weapons formerly owned by so-called “moderate” Syrian rebels, as well as large quantities of arms produced in the United States, a new report (PDF) reveals

The study — conducted by Conflict Armament Research, a research organization that tracks weapons proliferation in war zones — documents arms and ammunition captured by Kurdish People’s Protection Units and Peshmerga forces from IS in Iraq and Syria from from mid-June to early August 2014.

The researchers found that M79 anti-tank rockets used by IS in Syria are “identical” to those shipped by Saudi Arabia to Free Syrian Army fighters in 2013. Furthermore, the report states that IS combatants are using “significant quantities of US-manufactured small arms and have employed them on the battlefield” and provides numerous photographs of assault rifles, which were seized by IS, that are engraved with “Property of U.S. Government.”

“This is one more piece of evidence of why military solutions have devastating consequences in the immediate and long terms,” said Phyllis Bennis, senior fellow at Institute for Policy Studies, in an interview with Common Dreams. “We see an example of the consequences of the over-arming of the region if we look back at Afghanistan in the 1980s during the anti-Soviet War when the U.S. provided stinger missiles that can bring down aircraft to mujahedin guerrillas who morphed into al Qaeda.”

The researchers uncovered evidence that weapons intermediaries sought to conceal the source of the arms by removing serial numbers with torches. “The consistent welding methods applied to several weapons suggests that the same party removed the serial numbers — most likely to conceal the point at which parties diverted the weapons from legal (state-owned) to illicit (non-state) custody; and that the weapons were diverted from a common source,” states the write-up.

The report aims to “review physical evidence” about weapons captured by IS forces and does not make claims about who or what is responsible for the weapons flow, state the researchers. Whether the weapons are captured by IS or willingly transferred by other militias, the findings are likely to bolster warnings that U.S., Saudi, and other states’ arms shipments to so-called moderate Syrian combatants will ultimately contribute to the rise of IS, which is far stronger than the FSA.

The U.S. last spring escalated arms shipments to combatants of what was referred to as the Free Syrian Army, following covert programs, in cooperation with allies including Saudi Arabia and Qatar, to ship weapons and money to armed groups fighting Syrian President Bashar al-Assad.

“The U.S. has no way to bring pressure on Iran and Russia to stop arming the regime in Damascus as long as the U.S. and its allies are arming all the rebels,” said Bennis. “We need an arms embargo on all sides.”

“Isis, the war in Syria and the dangers facing freelance journalists | Guardian Explainers ”